Can you believe Iowa is in the seventh-place game of the tournament?

GEORGE TOWN, Cayman Islands — The Big Ten Conference season is looming, and the Iowa men's basketball team showed again Tuesday that it is not ready.

South Dakota State maintained its poise, executed its offense and constantly hurt the Hawkeyes with 3-pointers and uncontested drives to the basket to earn an 80-72 victory in the consolation round of the Cayman Islands Classic at John Gray Gymnasium.

It was the second consecutive unsettling setback for Iowa, which entered the tournament with a 3-0 record and now finds itself playing in Wednesday's seventh-place game. The Hawkeyes (3-2) fell to Louisiana on Monday after a prolonged drought in the first half.

That wasn't the issue Tuesday.

The Hawkeyes had much more energy throughout the game. But they didn't always have a keen understanding of teamwork. There were South Dakota State shooters left open, and too many Iowa players were going one-on-one on offense instead of passing the ball.

It was Wagner who gave the Hawkeyes their biggest late lift, igniting a 7-0 run to cut the Jackrabbits' lead to 63-62 with 5:48 remaining. The junior forward had a steal and a layup, followed by his second career 3-pointer

"Everybody on the court was excited. We got them to turn the ball over a couple of times, executed what we wanted to run offensively, getting into the fast break and everything. And that's what got us turned around," Wagner said.

But Iowa could never take the lead and South Dakota State made all the key plays down the stretch. The Jackrabbits made four of five field goals and eight of 11 free throws after Wagner's flurry brought Iowa's bench briefly to life.

Iowa scored the first six points of the game, but South Dakota State (4-2) answered with a pair of 3-pointers. The lead changed five times in the first half. 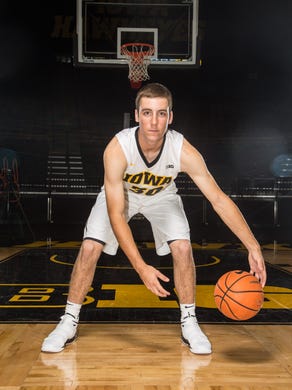 The Hawkeyes had stretches of disjointed play on both ends of the court, with nine turnovers that the Jackrabbits turned into 15 points. On defense, Iowa twice fouled 3-point shooters and once let Reed Tellinghuisen drive untouched down the lane for a dunk.

But late 3-pointers from Jordan Bohannon, Nunge and Moss kept the Hawkeyes in the game, trailing 36-33 at intermission. Moss had nine points to lead Hawkeye scorers in the first half.

It's a sign of a struggling team that it can't sustain its periods of good play, Wagner said.

"We're spotty right now. Great in some segments, not so great in other segments," Wagner said. "That's something we're going to have to fix, our consistency, if we want to be a great team. Which we can be."

Iowa next plays Alabama-Birmingham at 11 a.m. Wednesday to close out its tournament run.