From the archives: State of Iowa loses son in Hawkeyes star Chris Street 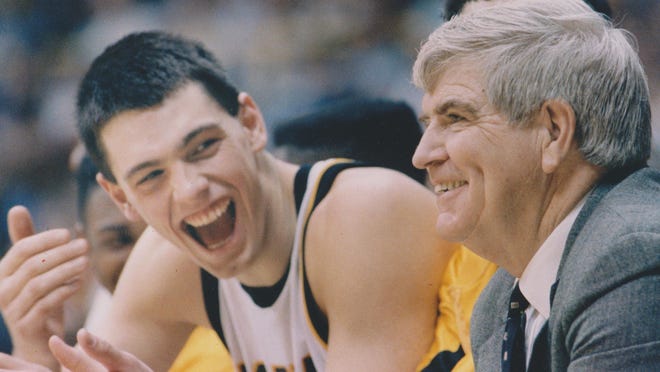 Chris Street was like family. That’s what makes this so hard.

Before he died on Highway 1 a few weeks shy of his 21st birthday, Street was more than just one of the best players on a nationally ranked University of Iowa basketball team. As if that wasn’t tragedy enough.

To play for the Hawkeyes is to share your precious college years with an entire state framed in black and gold.

It may sound like a carefree ride, but it’s an awesome responsibility, especially for one so young. Street made it look easy. He made it look more like a privilege than an obligation.

We have no major-league sports teams in Iowa. Our professional athletes are the minor-league baseball players who slip briefly through our lives on their way to fame or obscurity.

The Hawkeyes and Cyclones are our major-league athletes. For better or for worse, they are our sports idols, our heroes. They come from all over the country, total strangers for the most part, to Iowa City and Ames.

Before they are finished, they have spent more time on our television screens and in our family rooms than the average talk-show host. We don’t really know them, but we think we do.

Street never tried to wriggle out of that marriage. In fact, he embraced it.

Street wasn’t here just for the ride. This was home. He grew up here. He’d barely finished his sophomore year at Indianola High School when he accepted Tom Davis’ scholarship offer.

It still may be the record for early college basketball commitments. In truth, Street was ready to join the club long before that. Had it been up to him, the headlines would have read, “Street commits to Iowa, will decide on high school later."

On the trips home from alien arenas he often sat in the back of the plane with Jim Zabel and Bob Brooks, the venerable announces who have covered Hawkeyes sports since the flood. They weren’t just voices to Street. They were history. They were Iowa. They were us.

I have a feeling that’s one reason Street never turned down an interview request, why he treated the most superficial questions as if they pulsated with gravity.

If you noticed a surplus of Chris Street quotes in this newspaper, there was a reason. He was the best and most willing quote on the team.

At Duke last weekend, after the Hawkeyes had lost a close game with the nation’s third-ranked team, only one player showed up to answer reporters’ questions. It was Street.

“He didn’t care a bit about the spotlight or the media,” says boyhood friend Kyle Coffey, who was born in the same Leon, Iowa hospital four days before Street. “He didn’t need it. He didn’t have to do all that.”

But he did. Street knew what he meant to the folks at the coffee shops and the plants. He knew what the schools kids were thinking and feeling when they approached him for autographs.

Before he was a household name he was one of those school kids himself. He was the school kid, and players like Bobby Hansen, Michael Payne and Greg Stokes were his models.

Taylor remembers the first time he saw Christopher, as he still calls Street. After the kids’ games, the adults would gather around a TV to watch the Hawkeyes play basketball.

“He was wearing Hawkeye sweats,” Taylor said, “and he had this little Hawkeye basketball.

Christopher and some of his friends were lying on the floor. He kept turning around and asking his dad what the Hawkeyes were trying to do.

“Our oldest daughter was 5 or 6 months old then. When she started crying Christopher asked my wife if he could hold her. He was that kind of kid.”

And if he ever forgot what it was liked to be in love with Hawkeye basketball, his mother and father were there to remind him.

Only a few of us can understand the personal anguish of Mike and Patty Smith, his parents. Most of us can only guess.

On what had to be the worst day of his own life, Mike Street tried gamely to communicate the essence of his son’s all-too-brief existence.

“I think the people know,” he said, “but if they don’t, Chris was an even better person than he was a basketball player.”