Five takeaways from Iowa's 96-87 win against Illinois in the first round of the Big Ten Tournament. 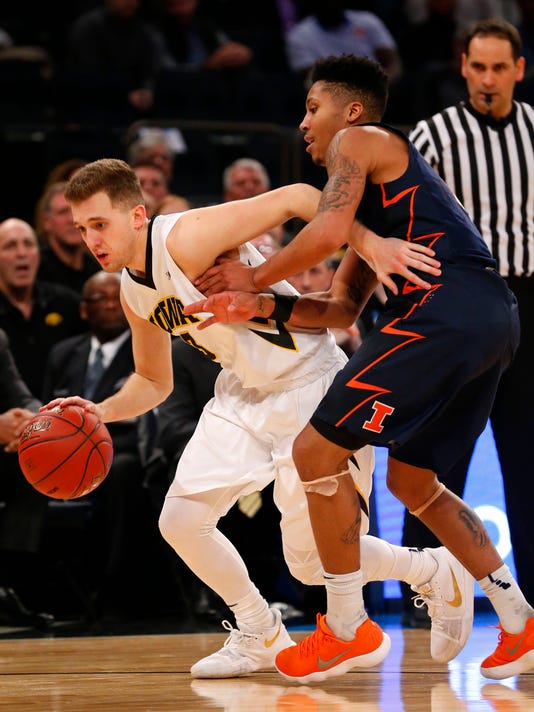 NEW YORK — Jordan Bohannon had become a focal point of national media since Sunday night, when his intentionally missed free throw against Northwestern went viral and became the feel-good story of college basketball.

“I couldn’t really get on my phone much,” Bohannon said. “Every 5 seconds or so, someone was calling me or texting.”

Wednesday, he felt what it was like to be the focal point of Illinois’ ball-hawking defense.

It became one of the stories of the game, one that Iowa conquered with strategy and perseverance in a 96-87 victory against Illinois in the first round of the Big Ten Tournament at Madison Square Garden.

“Their gameplan was to mug Jordan and not let him touch the ball,” fellow Hawkeye guard Maishe Dailey said, “because he’s probably the best shooter in the league.”

Illinois got physical with Iowa’s 6-foot sophomore ball-handler. Guards got their hands on him frequently, almost every trip up the floor in the first half — but usually not enough to draw a foul call from the crew of Bo Boroski, Terry Wymer and Lewis Garrison.

During timeouts, McCaffery was frequently in the ear of officials about the physical Illini play.

Bohannon committed an uncharacteristic four turnovers in the game’s first 10 minutes. He picked up his second foul on a double foul called by Boroski as Bohannon cut through the lane and contacted Te’Jon Lucas with 7 minutes, 47 seconds left in the first half.

“Not really sure (what happened),” Bohannon said. “I just tried to throw my hands up and create some contact. … That’s just how they play. You’ve got to give them a lot of credit. They get up into you, and get you frustrated.”

Illinois Fighting Illini forward Kipper Nichols (2) moves to the basket against Iowa Hawkeyes forward Luka Garza (55) during the second half of a first round game of the 2018 Big Ten Tournament at Madison Square Garden. Brad Penner/USA TODAY Sports
Fullscreen 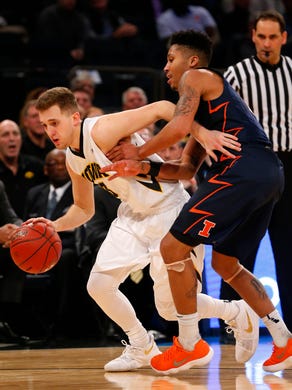 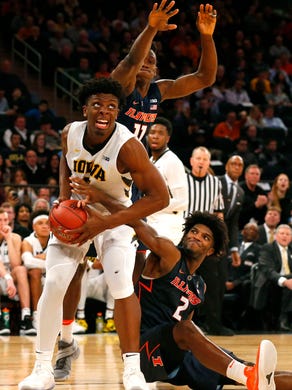 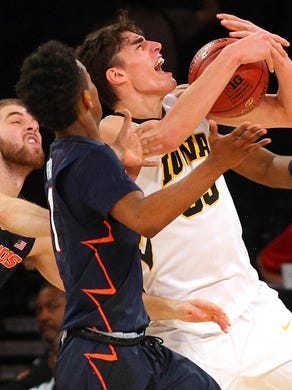 Illinois Fighting Illini forward Kipper Nichols (2) moves to the basket against Iowa Hawkeyes forward Luka Garza (55) during the second half of a first round game of the 2018 Big Ten Tournament at Madison Square Garden. Brad Penner/USA TODAY Sports
Fullscreen

Illinois Fighting Illini head coach Brad Underwood argues after being called for a technical foul during the second half of a first round game of the 2018 Big Ten Tournament against the Iowa Hawkeyes at Madison Square Garden. Brad Penner/USA TODAY Sports
Fullscreen

Illinois Fighting Illini head coach Brad Underwood coaches against the Iowa Hawkeyes during the first half of a first round game of the 2018 Big Ten Tournament at Madison Square Garden. Brad Penner/USA TODAY Sports
Fullscreen

Iowa Hawkeyes head coach Fran McCaffery coaches against the Illinois Fighting Illini during the first half of a first round game of the 2018 Big Ten Tournament at Madison Square Garden. Brad Penner/USA TODAY Sports
Fullscreen 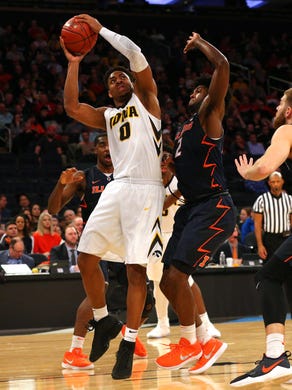 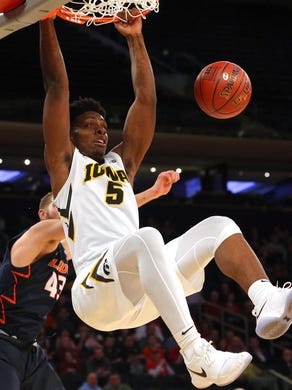 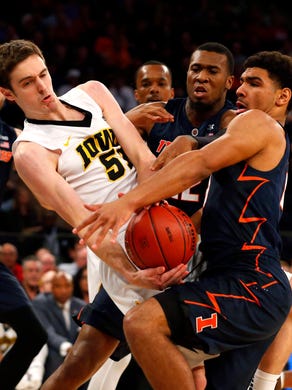 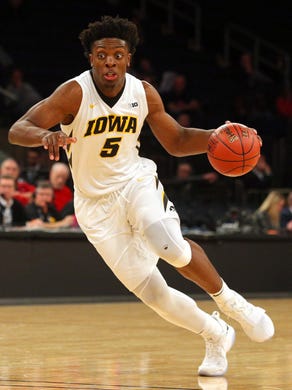 Illinois Fighting Illini head coach Brad Underwood coaches against the Iowa Hawkeyes during the first half of a first round game of the 2018 Big Ten Tournament at Madison Square Garden. Brad Penner/USA TODAY Sports
Fullscreen

The 6-foot-7 guard, already with two fouls himself, got Iowa to the finish line of the first half by running the point. While his statistical line won’t wow you — five points, three assists, one turnover in 16 minutes — it proved critical.

“I had one turnover,” Dailey said. “I thought I did good. Not bad.”

Dailey deserves a pat on the back for his performance. Even when Bohannon was on the floor, he often ran the point, which is not his natural position. Dailey's play helped spring Bohannon free, and the sharpshooter found a way to pump in five 3-pointers and score 25 points.

The 6-7 sophomore ran a lot of point guard in Iowa’s 96-87 win against Illinois.

Afterward, a TV reporter asked coach Fran McCaffery if he felt Bohannon’s continued production made him an unappreciated asset.

“If he’s under-appreciated (by someone),” he said, “then that person has no business appreciating anything.”

Of course, Bohannon’s national attention was due to him missing a free throw that allowed Chris Street — who was killed in a car accident 25 years ago — to remain associated with the Iowa record of 34 consecutive free throws.

Bohannon had made 34 in a row, but since Street never had a chance to attempt a 35th, he didn’t want to take the record from him. He purposefully left his shot short.

“I didn’t think much of it,” Bohannon said, three days after the miss heard ‘round the nation. “I just did what I thought was right at the moment. I’m going to continue doing that. If I get another chance, we’ll see what happens.”

After going 8-for-8 from the line Wednesday, Bohannon has made 10 straight free throws since the intentional miss. (Put another way, he’s made 44 in a row when trying to make them.)

Iowa star forward Tyler Cook was trending nationally on Twitter for a brief period after bashing his right thumb against the rim while being fouled on a second-half dunk attempt.

He left the game while trainer Brad Floy patched him up, leaving his status uncertain.

The thumb is fine, Cook insisted afterward. He called it a "scratch."

“I didn’t see it or feel it until the ref told me I was bleeding,” Cook said. “It’s fine.”

Cook, a right-hander, later returned and dunked with his left hand — as he often does. Cook now has 59 dunks for the season.

He finished with 19 points and five rebounds, leaving him seven points shy of becoming Iowa’s first sophomore to score 500 in a season since Chris Kingsbury in 1995-96.

That’s the title that Luka Garza already deserves in his young career.

On Wednesday, Garza again started slow — but was fantastic late, scoring 20 points, all in the game’s final 22:34, with eight rebounds. A late first-half 3-pointer got him going. 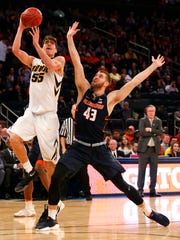 “I just settled down a little bit,” Garza said. “I came out a little antsy, a little nervous.”

“Mr. Illinois” has 39 points, 19 rebounds in two games against the Illini.

Garza’s going to be a good one. Check that: He already is.

The Wolverines, Iowa's next opponent at approximately 1:30 p.m. CT Thursday, swept the Hawkeyes this season by scores of 75-68 and 74-59. The fifth seed is playing as well as anyone in the conference.

This is going to be a tough one. Iowa will need to combat the 3-pointer, which is one of its biggest weaknesses. Even in victory, Iowa allowed 14 makes from long range Wednesday. There's no doubt that'll be the Wolverines' gameplan; they attempted 33 of them in a Feb. 14 win at Crisler Center.

"This is a team that has multiple weapons. ... The thing that makes them hard to guard is they have multiple 3-pointer shooters and multiple drivers. Right through the 5 man (Mo Wagner)."