Fran McCaffery unplugged: In-depth with the Hawkeye coach about the uncertain future of his program

With or without star forward Tyler Cook, Iowa coach Fran McCaffery vows fans will see a better team next season. He explains why:

Fran McCaffery unplugged: In-depth with the Hawkeye coach about the uncertain future of his program

Iowa basketball coach Fran McCaffery likes the experience and flexibility he'll have next season, with or without Tyler Cook Hawk Central

IOWA CITY, Ia. — The biggest question mark hanging over Fran McCaffery’s Iowa basketball team this offseason is whether its best player will return.

Tyler Cook is exploring his NBA options after a sophomore season that saw him lead the Hawkeyes with 15.3 points and 6.8 rebounds per game. He hasn’t hired an agent, so he can come back and play at Iowa.

But McCaffery said Wednesday in an interview with the Des Moines Register that he’s more concerned with Cook’s future than how it might impact his team, coming off a 14-19 season.

“A lot of times, there’s this perception that Fran and his staff want him to come back and he wants to go. That’s not the case at all. I want that kid in the NBA,” McCaffery said. “And there’s no doubt in my mind, it’s not a matter of if, it’s a matter of when. Now maybe it isn’t this year, OK? But maybe it is. The bottom line is he had to put his name in. He had to get the feedback. He’s got to go to some workouts and see how that goes. And meet some of those folks face to face and see what happens.”

McCaffery said he’s satisfied with his depth in the front court if Cook does decide to end his Hawkeye career after two seasons. He also said he’s not scouring the country for potential replacements for the power forward.

“We can’t get in his way. We have to support him in his pursuit,” McCaffery said. “In the meantime, it’s not like I’m calling 12 guys on the recruiting trail and saying, ‘Hey, if TC goes, you’ve got a scholarship.’ I’m not doing that. We’ve got guys that can play. We’ve got some veteran guys that can play. And we’ve got more flexibility next year if we want to play small.”

In the second segment of this two-part question-and-answer session with McCaffery, the eight-year Iowa coach addresses how he’s managing having his son, Connor, on the team, realistic expectations for incoming star recruit Joe Wieskamp, and why he’s optimistic about next season.

Part I:: Fran McCaffery unplugged: In-depth with the Hawkeyes coach on what derailed Iowa's season

But he begins by sharing his thoughts about last offseason’s surprise departure of backup point guard Christian Williams, and whether he believes his team has the requisite toughness to compete in the Big Ten Conference.

Answers have been edited slightly for brevity and clarity.

DMR: In retrospect, how damaging was the Christian Williams departure right before the season began?

Fran McCaffery: We had it set up for him to be the backup point guard and give you some flexibility. You could play (Jordan Bohannon) at the 2. You could play Christian at the 3. He’s a veteran guy. We go through the foreign trip and he’s there. OK, so then he up and leaves before the first game. All right, well Connor can take his redshirt off. We’ll have some depth there. Then he gets sick and has a terrible year health-wise. Brady (Ellingson)’s got the concussion problem. And all of the sudden now we’re pretty shallow. Had Christian left earlier, we could have maybe gone out and signed a guy if we wanted to and it would have given us a little more flexibility. But again, if Connor doesn’t get sick, I think we have enough depth. 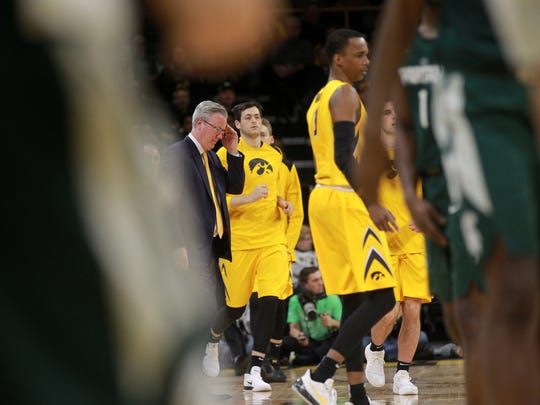 “I never felt like we weren’t tough. There were times where maybe we weren’t as efficient as we needed to be at crunch time. And that can be perceived that way.”

DMR: Do you think there’s something lacking in your team makeup, just the chemistry, the toughness, the wherewithal?

FM: I think what you do is you analyze every aspect of it. I never felt like we weren’t tough. There were times where maybe we weren’t as efficient as we needed to be at crunch time. And that can be perceived that way. There can be any number of reasons what went wrong there. It starts with the guy with the ball (Bohannon). I don’t think there’s a tougher guy in the country. I thought Luka (Garza) and TC were really competitive guys and pretty consistent. The guard position was a challenge because we really rotated three guards. That’s what we did. And those guys I thought fought really hard and were pretty good. But again it was all new and so I think with what we have coming back and the experience that we have, I feel better about those things that you’re referring to next year than what we just experienced. 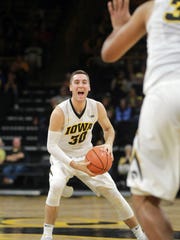 DMR: How did it go coaching your son for the first time? How did you manage that internally with the locker room dynamic, making sure he wasn’t being seen as a favorite?

FM: I think he’s been around our team so much. He’s grown up and he’s been in that locker room. He knows all the guys on the team. Not just from being here. But he’s known Austin Ash since fifth grade. He’s known Cordell (Pemsl) since probably seventh grade. He’s known (Nicholas) Baer. He’s played against Baer. I mean, he and Bohannon have been playing against each other, traveled together. The same with (Ryan) Kriener. You just keep going. And of course the other guys who got here, he knows all of them. So I think that’s been an easy deal. It was just the injury, sickness part of it, the surgery, it was really hard. … So I’m not worried about that. He’ll play. How much will be determined by him and how everybody else is playing. But it will be nice to know that we have some options next year. We’ve got three solid guards coming back that are veteran guys now. And we’ve got three rookies (McCaffery and incoming freshmen Wieskamp and C.J. Fredrick).

FM: Yeah, the thing about Joe is he’s as good of a rebounder as there was in the state of Iowa. So he can play the small forward position. Like I said, we could play small. We could play he and Baer at the forward positions. We could play four guards and he’s technically the ‘4’ man. Because he’s 6-6 and long and can dunk it. We just have more flexibility. I still have guys that I love: Cordell, Jack (Nunge), Ryan, obviously TC and Luka.

DMR: What are reasonable expectations for Wieskamp next year? Obviously, he was a big star at Muscatine and people know about him. Are people getting too excited about him? What do you think he can realistically give you next year?

DMR: What’s the biggest reason for optimism next season?

FM: I feel really good about the group we have coming back, the experience moving forward from guys that have produced. We’ve got four double-figure scorers returning. We’ve got one of the best point guards in the country. Obviously, Tyler Cook, if he stays in the draft we’ll be thrilled for him. If he comes back, he’ll one of the best players in the country, no question about that. But we have proven commodities offensively. We have size. We have depth that we didn’t have last year, especially in the backcourt. Gives us flexibility to play big or small, enables us to continue to press the way we want to press. We’ve got to address some things on the defensive end of the floor and be committed to making changes in that area. But I’m really excited about this group. I’ve been incredibly impressed from the day the season ended until now with how they have worked. Starting with killing it in the weight room. We’re going to look different and be different next year physically. But I really think this is a group that’s connected.