The first four games on Iowa's schedule have dates and opponents, including a game against Oregon on Nov. 15 at Madison Square Garden in New York City.

Iowa basketball coach Fran McCaffery likes the experience and flexibility he'll have next season, with or without Tyler Cook Hawk Central 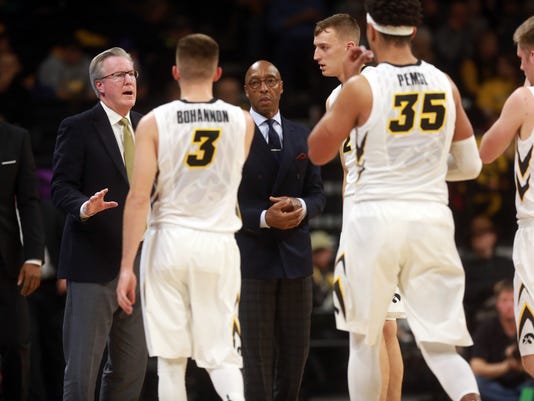 The dates and opponents for Iowa’s first four games of the 2018-19 men's basketball season were unveiled Monday.

Fran McCaffery’s ninth Hawkeye team will officially open play as part of the 2K Classic against Missouri-Kansas City in a Nov. 8 game at Carver-Hawkeye Arena, followed by a matchup against Green Bay on Nov. 11.

The following week, Nov. 15-16 in New York City, the Hawkeyes will have two 2K Classic games in Madison Square Garden. The Nov. 15 opponent will be Oregon, which reached the 2017 Final Four as a No. 1 seed but missed the NCAA Tournament completely in 2018. Still, the Ducks (RPI 67) posted a 23-13 record last season, secured one of the nation's top-five 2018 recruiting classes and will mark Iowa’s first formidable opponent of the season.

The Hawkeyes will face either Syracuse (RPI 33) or Connecticut (RPI 126) the following night, depending on the Oregon result.

This means that 27 opponents (with one “or” in there) of Iowa’s expected 31 are known — 20 in Big Ten Conference play; the four in the 2K Classic; home against Pittsburgh (Nov. 27 in the Big Ten/ACC Challenge) and Iowa State; and a neutral-site Hy-Vee Classic game against Northern Iowa in Des Moines.

The Prime Time League keeps plugging ahead, now in Year 32. The high-scoring summer league that features 12 Division I players each from the Iowa and Northern Iowa basketball programs, though, could use a few more good men.

PTL director Randy Larson wanted to get the word out that his league will continue to accept applications for players leading up to Sunday’s draft.

“I want everybody that would be good for us to know about it,” Larson said. “We’ve always had enough good players where there’s not a problem of having seven or eight good players on each team.”

To round out the league, Larson is hoping to get more applications from small-college players from around the state or high-end high school players, even if they can’t make every game.

“This will be the first year that the Cedar Rapids small-college league will not play on our nights. I’m hoping that will allow them to play in our league as well,” Larson said. “Before, they had to choose between a league where they’re going to play 35 minutes a night versus 10. I’m hoping that’ll provide some good quality depth for us because there’s a lot of good players in that league.”

Applications can be found at PrimeTimeLeague.com and must be submitted to Larson’s office (250 East Court St., Iowa City), in person or electronically (via email, at randymlarson@gmail.com), along with a $50 fee that also covers a game uniform.