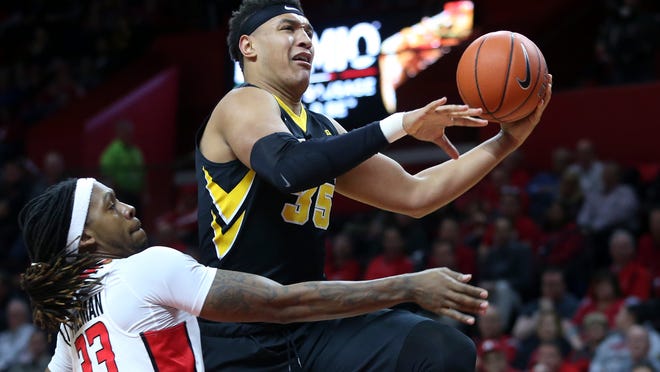 This time, Cordell Pemsl is sidelined for real.

The Iowa junior forward had surgery on his knee Tuesday that will cause him to miss the remainder of the season, the No. 21 Hawkeyes announced prior to their scheduled game against Western Carolina at Carver-Hawkeye Arena.

He would be a likely candidate for a medical redshirt, should Pemsl and the Hawkeyes pursue that route.

Iowa initially announced that Pemsl was out for the year on Nov. 27, but the 6-foot-8, 230-pound Dubuque alum unexpectedly returned Dec. 6 against Iowa State. Pemsl scored eight points in 18 minutes, showing signs that he could possibly contribute this season in some fashion.

His right knee, which contains a 4- to 6-inch metal plate and five screws, had begun feeling better. Even if Pemsl couldn’t practice full-go all the time, there was hope that surgery could be put on hold.

But he sat out Saturday's 77-54 victory over Northern Iowa at the final Hy-Vee Classic in Des Moines and was wearing a suit on the Iowa bench.

Then came Tuesday's news confirming the surgery, relating to hardware in his knee from a previous operation in high school that continues to cause Pemsl discomfort.

“I tried to give playing this season another shot in the Iowa State game, but after a week of rest and recovery, the chronic irritation caused by the hardware has remained, resulting in my inability to play in Saturday’s game versus UNI," Pemsl said in a university news release. "After further discussions with the medical staff, we determined that the best course of action is to correct the problem at this time.”

Pemsl played in two games this season, logging a total of 31 minutes. For his career, he has averaged 7.2 points and 4.7 rebounds in 68 contests.