Chad Leistikow and Mark Emmert offer their picks and analysis for tonight's game. The Hawkeyes are favored by 4.5 points.

Iowa center Luka Garza explains why the Hawkeyes have given up Twitter as they prepare for the Big Ten Tournament. Hawk Central

Mark Emmert and I are here at the United Center to bring you coverage of the Hawkeyes, for however long they’re here. We know for certain there’s a game tonight. After that, it's anybody's guess. 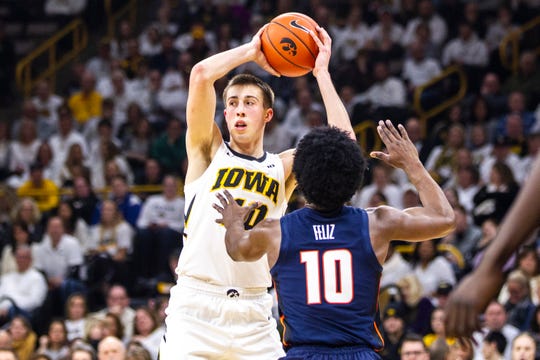 Big Ten Network is carrying all Thursday and Friday games at the Big Ten Tournament. CBS takes over for Saturday’s semifinals and Sunday’s final.

Iowa: Jordan Bohannon. The junior point guard’s postseason numbers are fantastic. In five career games (three in the Big Ten Tournament, two in the 2017 NIT), Bohannon is averaging 20.8 points and 9.2 assists per game, and he’s connected on 24 of 45 attempts from 3-point range. That’s 53.3 percent. This is a big game for Iowa’s big-game player. And he’s coming off a strong performance at Nebraska, in which he scored 20 points with five assists.

Illinois: Giorgi Bezhanishvili. The 6-foot-9 freshman scored 26 points in Wednesday night’s 74-69 overtime win against Northwestern, converting 12 of 15 shots from the floor. The Illini don’t have a ton of size, but if Bezhanishvili is hitting his shots — and he has quite the array of them — that’ll be a problem for Iowa. He was held to 11 points in the teams’ only meeting. Speaking of …

The teams met once in the regular season, and it was Iowa’s best shooting performance of the season. The Hawkeyes canned 15 of 21 attempts from 3-point range in a 95-71 rout of the Illini on Jan. 20 at Carver-Hawkeye Arena. Freshman Joe Wieskamp was a perfect 8-for-8 from the floor and scored a career-high 24 points. As a team, the Hawkeyes shot 68 percent. A repeat performance is probably too much to ask, but it’s worth noting: Iowa has reached 95 points in all three meetings against Illinois under second-year coach Brad Underwood (including a 96-87 win in last year’s Big Ten Tournament).

What Vegas is saying

Iowa opened as 4-point favorite, and the line was hovering around 4½ late Thursday morning. The Hawkeyes have failed to cover in the point spread in a jarring eight consecutive games, and they’re 3-5 straight-up in those contests. (They're due, right?)

Third-seeded Michigan, at approximately 8:30 p.m. Friday. Iowa defeated the Wolverines, 74-59, on Feb. 1 in what was the high point of the Hawkeyes’ season to date.

Iowa has scorched the Fighting Illini three times in the past two years, scoring 295 points by taking advantage of a defense that is overly aggressive about trapping ball-handlers. This is a favorable matchup for an Iowa offense that showed life in Sunday’s loss at Nebraska and is looking to rediscover its potency. Illinois has plenty of young talent, but not an abundance of muscle. Iowa got Bezhanishvili in foul trouble in the first meeting and kept the 6-9 post player planted on the bench for 16 minutes. Fellow freshman Ayo Dosunmu is the bigger worry here, with his ability to run the court and create easy scoring opportunities.

Prediction: The Hawkeyes have lost four straight, but should benefit from drawing a tired opponent that it has owned recently. Look for Iowa’s shooters to find confidence early and for the team to pull away late. Iowa 91, Illinois 79.

The Hawkeyes haven't experienced a comfortable win since that Feb. 1 upset of Michigan. Their four wins since (Indiana twice, Miracle I vs. Northwestern at home, Miracle II at Rutgers) were down-to-the-wire, hair-pulling thrillers. The key for them to regain their mojo tonight is Tyler Cook. Fresh off a second-team all-Big Ten nod, the Hawkeyes' power forward has a prime chance to show his athleticism and power against an Illinois team that lacks inside girth. He oddly only attempted two shots last time against the Illini, but if he lets the game come to him tonight, he should flourish. I also think Chicago native Isaiah Moss is motivated to shine in his hometown.

Prediction: Iowa will jump out to a strong start, but Illinois has play-making guards that should have all Hawkeye fans nervous. This one won't be over until the final minutes. But Bohannon will knock down some clutch free throws, and the Hawkeyes will avoid a bad loss and worries about a trip early next week to Dayton. Iowa 81, Illinois 76.