Big Ten Tournament: Tyler Cook being himself again, and an Iowa-Michigan preview

Chad Leistikow and Mark Emmert get you ready for tonight's Big Ten quarterfinal against Michigan.

Big Ten Tournament: Tyler Cook being himself again, and an Iowa-Michigan preview

CHICAGO — When Tyler Cook ultimately decided to come back to Iowa for his junior season, part of his mission was to become a more complete player.

Cook uncorked his typical display of dazzling dunks in Iowa’s 83-62 rout of Illinois at the United Center. Three of them, out of five baskets.

He also defended with intensity, ran the floor well and showed unselfish passing. It was a performance Cook needed after being held to nine total points in the Hawkeyes’ final two regular-season games.

“Tonight was big for me, as well as it was for our team,” said Cook, who was playing his first game since being named second-team all-Big Ten by the league’s media. “I just wanted to come out and be aggressive, not worry if shots were falling, if I was making mistakes. I just wanted to play hard and have fun tonight.” 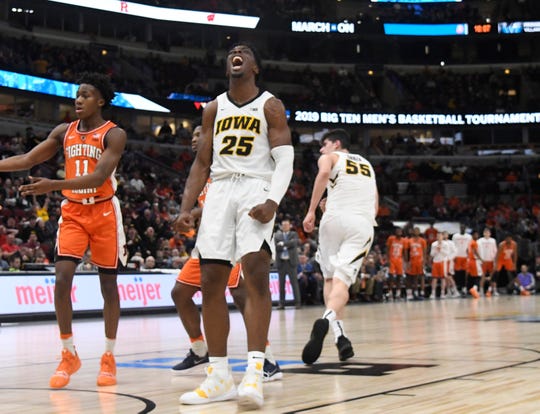 Cook finished with 12 points, five rebounds and a team-high six assists — four of which resulted in 3-pointers (two by Jordan Bohannon, two by Nicholas Baer).

“I knew especially in transition I’d have guys wide open,” Cook said. “I gotta give them credit, they made shots tonight.”

For whatever reason, Cook has gotten an unfair shake from a fair segment of Hawkeye fans. Maybe it’s because they expect a lot out of one of the most physically imposing players the program has ever had.

It was nice to see Cook let Thursday's game come to him … then let his game flourish.

“It just feels good to get out there,” Cook said, “and kind of be myself again.”

How to watch, Vegas odds

This one's back on the Big Ten Network again, and tip-off will commence about 30 minutes after Minnesota vs. Purdue. Brian Anderson, Bill Raftery (onions!) and Andy Katz are on the call. Michigan was an early 7½-point favorite. KenPom.com projects a 75-67 Michigan win.

Iowa: Joe Wieskamp. The Hawkeye freshman was fantastic in his first career postseason game, with his line of 13 points and seven rebounds not doing justice to how dominant he was against Illinois. Wieskamp hit 19 points against the Wolverines in their last meeting, but he seems to have full confidence at the most important time of the year. He had been held to five points or less four times out of five games until scoring 14 in the regular-season finale at Nebraska.

Michigan: Charles Matthews. The team's lone fourth-year player has missed nearly four games with an ankle injury, two of them losses to rival Michigan State. The Wolverines' defense is a lot tougher with their veteran guard on the court. Iowa held Matthews to six points and one assist on 2-for-12 shooting in 36 minutes on Feb. 1 in Iowa City. If Matthews is back to his usual self, that'll be trouble for the Hawkeyes.

Iowa's 74-59 win was a masterpiece in defense and ball control. The Hawkeyes held Michigan to 8-for-33 shooting from 3-point range. Do that again, and this game won't get out of hand. They also took care of the basketball. Too often when Iowa gets blown out of the gym, it’s too careless. Iowa had only 11 turnovers in that game against Michigan’s elite defense. Get up shots, up your chances. (Iowa has 25 assists to just eight turnovers Thursday against Illinois.)

Friday's Minnesota-Purdue winner. The second-seeded Boilermakers were early 10-point favorites. Saturday's second semifinal is set to begin at approximately 2:30 p.m. CT and will be televised on CBS.

Iowa’s best performance of the season came in a 74-59 home win over No. 11 Michigan as the calendar turned to February. Everything went right for the Hawkeyes that night. They outscored Michigan 40-20 in the paint and limited the Wolverines to 24 percent from the 3-point arc. Michigan got a mere three points from non-starters. Ryan Kriener came off the Iowa bench to contribute 15 points and 10 rebounds. The Hawkeyes also pushed Michigan to overtime before falling in last year’s Big Ten Tournament. That should give Iowa fans hope. But betting against a John Beilein-coached team in March is perilous. The Wolverines thrive in this event and in this month.

The Hawkeyes are comfortably into the NCAA Tournament field now, after avoiding a bad loss Thursday. They're a confident group, and it's clear they believe in themselves again after a rough four-game stretch. Point guard Connor McCaffery discussed that streak after the Illinois game, and pointed out that Iowa played bad against Rutgers but the other three losses were against good teams on the road. This is a mature team that is ready to prove a point.

Prediction: All the Hawkeyes have to do to pull the upset is play well. This is a good team when it's clicking. When Iowa won four games in four days at the United Center in 2001, it was a 6 seed and coming off a miserable finish to the regular season then got hot. Maybe this team can find the same magic. Wieskamp asserts himself with another big game (I'll say 17 points), and the Hawkeyes reach a Saturday semifinal for the first time in 13 years. Iowa 69, Michigan 66.