In-depth with Patrick McCaffery: On his Hawkeye future, respect for his father

In-depth with Patrick McCaffery: On his Hawkeye future, respect for his father

Iowa signee Patrick McCaffery discusses a number of topics as he watches Hawkeye practice at the NCAA Tournament. Hawk Central

IOWA CITY, Ia. — Donning a yellow Hawkeyes sweatshirt, Patrick McCaffery stood courtside as the seconds wound down on Iowa's nearly historic comeback against Tennessee in the second round of the NCAA Tournament.

He remembers feeling a couple emotions. One was pride, for the way his future teammates battled to force overtime after trailing the Volunteers by 25 points.

Because, the next time Iowa plays a game, McCaffery will be wearing a Hawkeyes jersey.

"It’s unbelievable, honestly," the 6-foot-8 son of Fran McCaffery told the Register with his characteristic chuckle. "It’s been coming for so long that it felt like it would never come."

The Register caught up with Patrick McCaffery this week to discuss, among other things, his senior season at Iowa City West, his improved 3-point shot, his thoughts on Iowa's season, his future as a Hawkeye and his respect for his father. 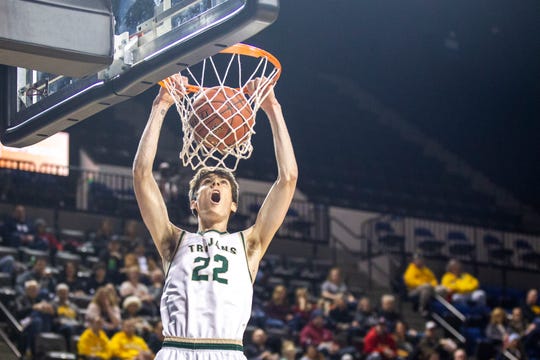 A dramatic season, respect for Dad

Whether it was the Gary Dolphin drama, Fran McCaffery's suspension or the four-game losing streak to end the regular season, plenty of unwanted noise surrounded Iowa basketball this year.

Patrick McCaffery has a unique perspective. Although most of Iowa sees Fran McCaffery as a basketball coach, Patrick simply sees him as Dad.

"We’re a really close, tight-knit group. Let the noise happen on the outside," Patrick said of how his family dealt with this year's ups and downs. "We can’t do anything about it, so just try to control what you can control and work and get better every day. That’s all you can really do."

That's the attitude his dad exudes when he's away from the arena, Patrick said.

And he said he respects his father so much for it.

"He never wavers. He never rattles off the court," McCaffery said. "Obviously, on the court, he’s pretty animated. But off the court, he never rattles. People always ask me, 'Am I scared of my dad?' and stuff like that. Like, no. He’s just always chilling. He's the chillest guy I know. He always prides himself on keeping a level head.

"The thing he always tells me is, 'You can’t get too high, and you can’t get too low.' Because, if you do, that’s dangerous in the game that we play and the lifestyle we live. No matter what, win or loss, just take it with a grain of salt and move on because there’s another game in two days that you’ve got to work on and get better for."

McCaffery had a monster senior campaign and was named one of three finalists for the Register's All Iowa boys' basketball player of the year.

Beyond putting up numbers Trojans coach Steve Bergman said he's never seen before at West, McCaffery may have been Class 4A's most efficient scorer. He netted his 25.1 points per game on 58.2 percent shooting, good for the best clip in 4A among players with more than 300 shots. He also shot 45.3 percent from long range.

He became West's all-time leading scorer this season, too. (And plenty of Iowa prep legends have come through Bergman's program.)

"I didn’t really care if I scored 12 points, 15 points, just whatever — as long as we won, that’s all that really mattered to me," McCaffery said. "I just wanted to win as many games as possible. Just being able to put our team in a position to win, whether that’s scoring points or just doing whatever." 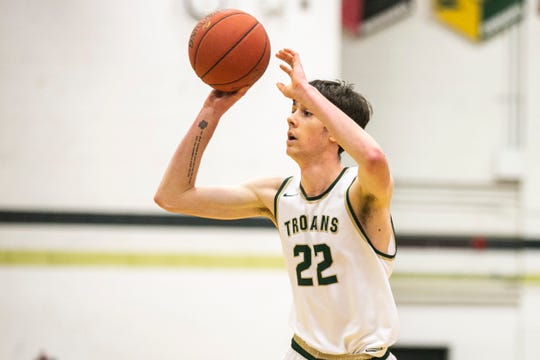 Release up, not forward

It was a marked improvement from last year, when McCaffery shot only 26.2 percent (17-for-65) from deep. He said he worked with Iowa assistant coach Kirk Speraw on his long-range stroke this past offseason.

Before this year, McCaffery said his shot arc was flat. When he released the shot, his arm would go forward rather than up. Now, with a more refined stroke, McCaffery feels more confident in his 3-point shot than ever.

Where does he project at Iowa?

Recruiting analysts are somewhat split when it comes to McCaffery's collegiate position. Some see him as a stretch power forward, while others see him more as a wing.

Truth is, McCaffery is a little of both.

He now can boast the outside shot of a wing. He also has the height to disrupt shots inside. He has very a good handle for his size, especially in transition. And, although he can afford to add strength if he's going to play down low, he has the length and quickness to guard multiple positions.

"Honestly, I just want to go whatever place that can help us win," McCaffery said. "Wherever I can contribute to the team, whether it’s forward in a small lineup or guard (in a big lineup), I’ll play whatever. I feel like that’s kind of my best attribute — being able to play everywhere."

Regarding the possibility of redshirting, McCaffery said his plan right now is to play as a true freshman. But plans can change, he said. He trusts the coaches' judgment.

Iowa City West's Patrick McCaffery (22) looks toward the basket around Cedar Falls' Jackson Frericks (24) during the first half of their 4A state basketball championship game on Friday, March 9, 2018, in Des Moines. Brian Powers/The Register
Fullscreen

Patrick McCaffery of Iowa City West drives to the basket during the 4A semifinal game against Waukee Thursday, March 8, 2018. Zach Boyden-Holmes/The Register
Fullscreen

Patrick McCaffery of Iowa City West drives to the basket during the 4A semifinal game against Waukee Thursday, March 8, 2018. Zach Boyden-Holmes/The Register
Fullscreen 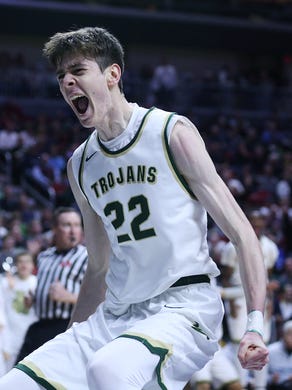 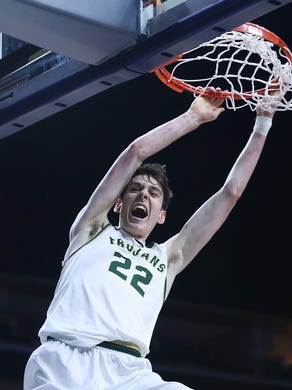 West High freshman Patrick McCaffery dunks the ball iin the final seconds of the fourth quarter at the US Cellular Center in Cedar Rapids on Tuesday, March 1, 2016. Bill Adams / The Press-Citizen
Fullscreen 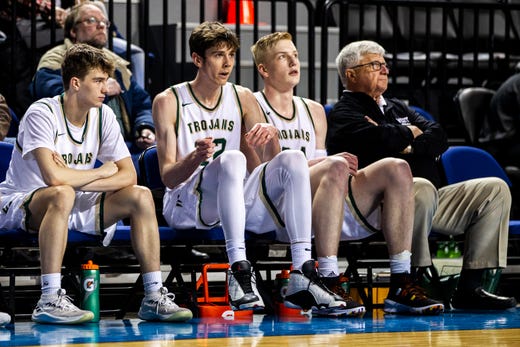 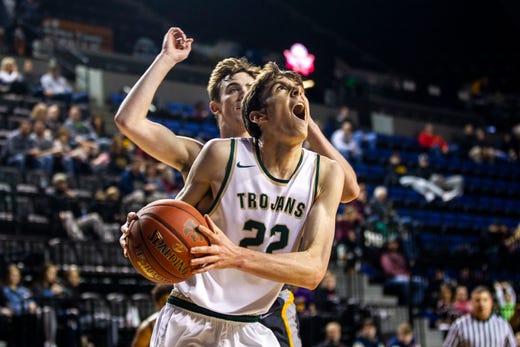 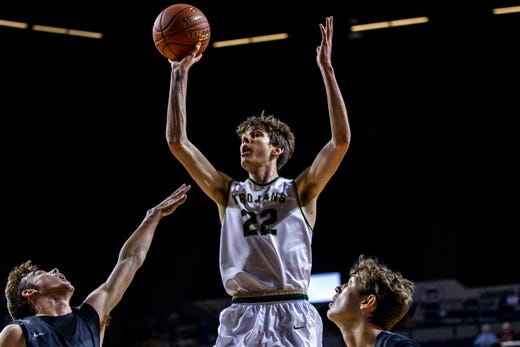 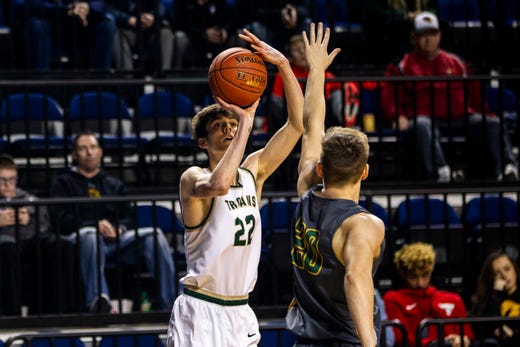 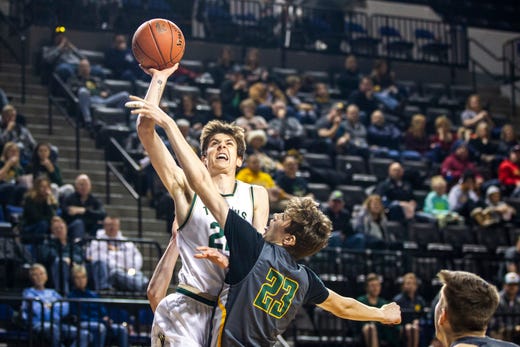 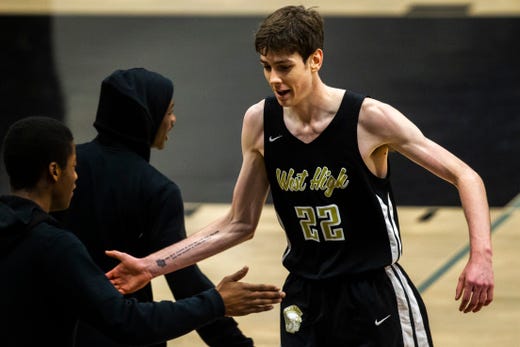 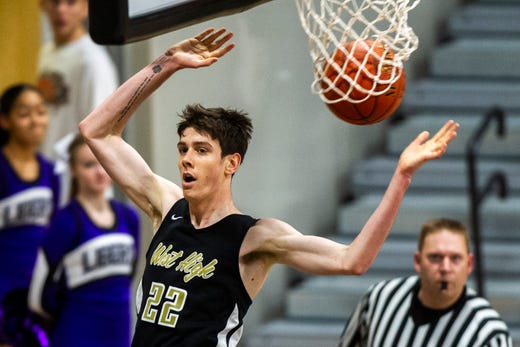 Iowa City West's Patrick McCaffery (22) comes down off the hoop after a dunk during a Class 4A boys basketball game on Friday, Dec. 21, 2018, at Liberty High School in North Liberty. Joseph Cress/Iowa City Press-Citizen
Fullscreen 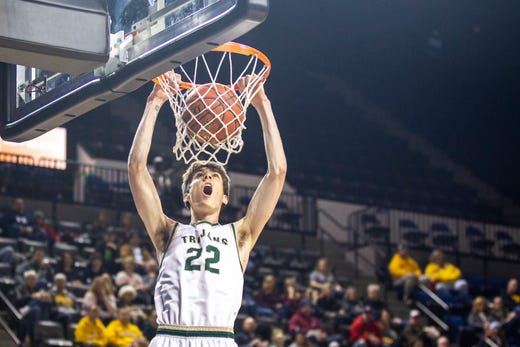 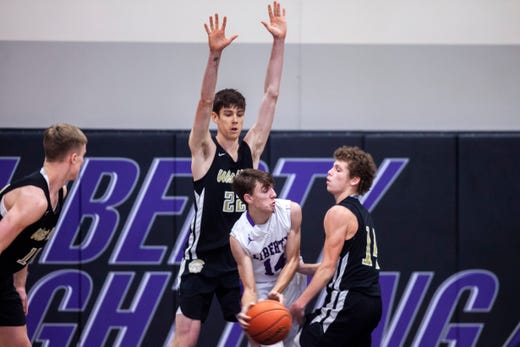 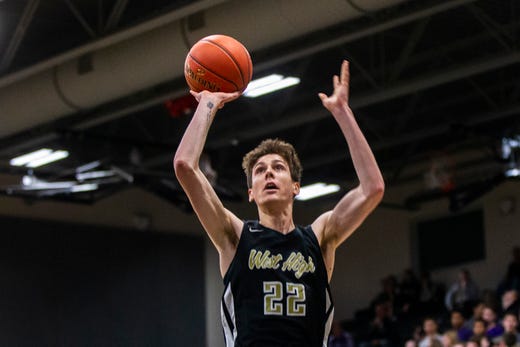 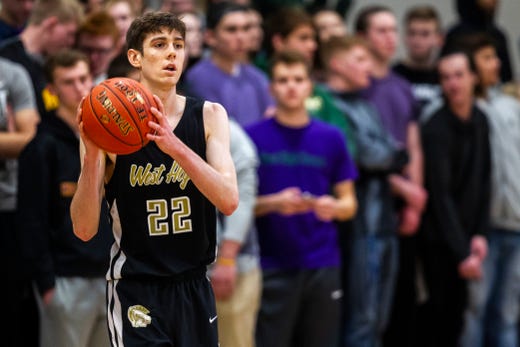 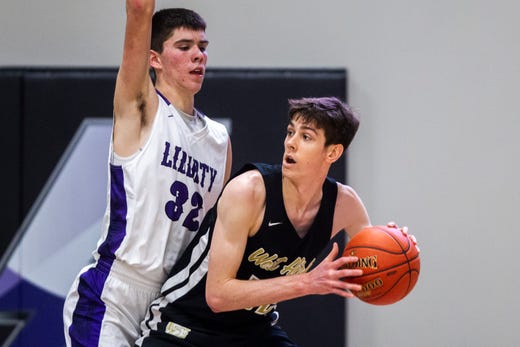 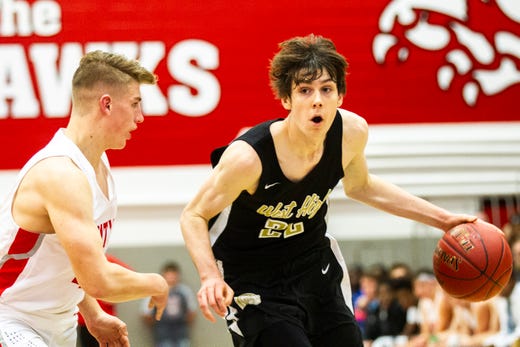 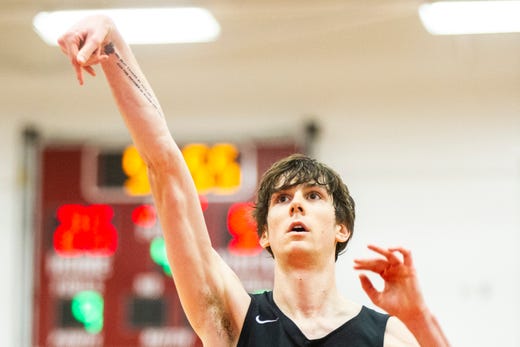 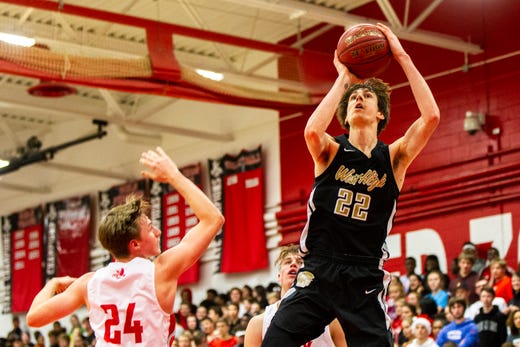 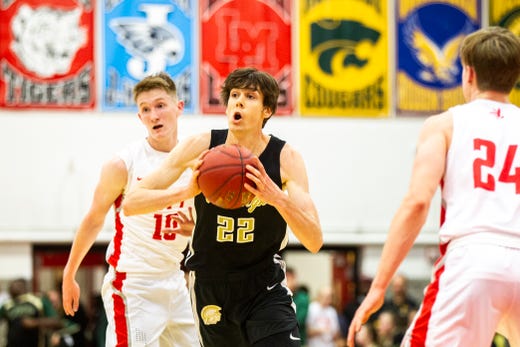 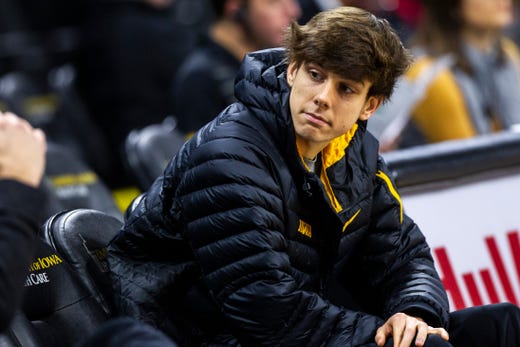 McCaffery echoed the sentiment of his soon-to-be-teammates: He's proud of the team's resilience.

"They were never completely out of a game. They always put forth a good fight," McCaffery said. "The last game just goes to show what happened this season. The first half, they didn't get off to a good start that they wanted to.

"So we weathered the storm a little bit, came out in the second half and TC (Tyler Cook) being really aggressive at the beginning was huge. It got everybody more confidence moving forward. They just made tough shots, made big shots. That’s something that they did all year. They got right back into the game. They fought. They got key stops when they needed them. They just fell a little bit short at the end."

"We have everybody back from the team, except for Nicholas (Baer), who is a massive loss for so many reasons," McCaffery said. "But we have the majority of the team back, and then we have guys like Cordell (Pemsl) coming back off redshirt, Jack Nunge has been playing as well as anybody, and then C.J. (Fredrick) and obviously me and (point guard signee) Joe (Toussaint). So we have the pieces there to make noise. It’ll be interesting to see how it all gets put together."

On his (and Connor's) Hawkeye dream finally coming true

"On my visit, when we put the jerseys on, that’s really when it hit me," he said. "I looked down and I was like, 'Whoa, this is real. This is going to happen.' I’ve always been with my dad’s teams everywhere. When I was younger, I’d go to practice every day. That’s always been the plan: Play for my dad, be on his team. So finally getting to have the opportunity? It’s just unbelievable.

"Any time that you get to play with your brother is really special, especially in the Big Ten at the highest level. That was always our goal. We’ve just always been around it. So to actually be able to play there together, that’ll be crazy when it finally happens. It’s been something that we’ve been thinking about for a really long time."