Arnold, a leading member of Iowa's 1980 Final Four team, had been battling severe health issues since being diagnosed with brain cancer at age 25. Arnold died peacefully, according to close friend and former teammate Mike "Tree" Henry, at his nursing home in southwest Chicago.

A guard on the Hawkeyes' most recent Final Four team in 1980, Arnold battled severe health problems for more than three decades. 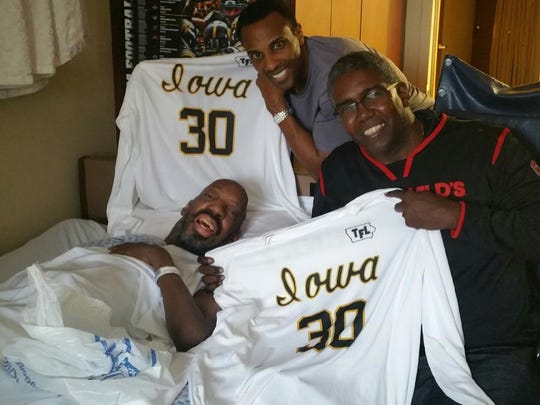 A tragic diagnosis of brain cancer in 1985, as he was preparing for a tryout with the NBA’s Dallas Mavericks, began Arnold's health woes. He was given a 10% chance to survive, but his body kept fighting. He's suffered multiple strokes. In his final years, he was largely confined to a hospital bed and couldn't speak.

Through it all, he was always known by friends and former teammates for maintaining a relentlessly positive outlook on life.

"I was blessed to have such a caring friend who taught me so much about life and what it is to truly LIVE, no matter what your circumstances were," Henry told the Register via text message on Saturday morning. "He taught me perspective in understanding things could always be worse. I couldn't really have a bad day, because when I found myself complaining about day-to-day things, I just thought of Kenny."

Arnold was a beloved Hawkeye. Despite playing with a broken thumb in the 1979-80 season under Lute Olson, he averaged 13.5 points a game as the Hawkeyes made a stirring run past mighty Georgetown into the Final Four.

Arnold's Iowa teams finished first, fourth, second and second in the Big Ten Conference during his four-year career (1979-82), in which he scored 1,112 points. He is one of three Hawkeyes to score 20-plus points in a Final Four game (Carl Cain and Bill Logan are the others). Arnold's 352 assists rank 10th in school history.

“Our thoughts and prayers are with the Arnold family," Iowa coach Fran McCaffery said in a statement. "We lost one of the most inspirational players our program has ever had. Kenny always had a smile on his face and cared most about the happiness of others. His spirit and legacy will not be forgotten.”