D.J. Harvey visited Iowa City last week as he narrowed his choices to a final two.

Fran McCaffery reacts to an 83-77 overtime loss to Tennessee in the second round of the NCAA Tournament. Hawk Central

Coach Stackhouse and the coaching staff at Vanderbilt have something brewing over in Tennessee! Can’t wait to be apart of it... blessed and excited to say that I’ve committed to Vanderbilt University pic.twitter.com/pl6Kni9Uqd

Harvey made an official visit to Iowa last week, but the Hawkeyes ended up with a meaningless silver medal in his recruitment. He’ll instead join a Vanderbilt program that went 21-43 over the past two seasons but is hoping to be revitalized under new coach Jerry Stackhouse.

Harvey, who has dealt with injury issues, averaged 10.7 points and shot 39 percent from the floor for the Fighting Irish last season. Under transfer rules, Harvey would have to sit out next season and would have two years of eligibility, beginning in 2020-21. 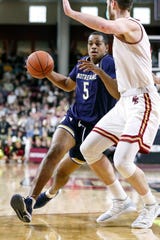 He would’ve been a welcomed addition in Iowa City as Fran McCaffery looks to restock his roster for the future. Iowa is down to 10 scholarship players for next season after Isaiah Moss announced his intent to transfer last week, and it’s down to an expected eight for the 2020-21 season (with Jordan Bohannon and Ryan Kreiner graduating after this coming season).

The 0-for-transfers Tuesday only ramps up the urgency with which Iowa needs to fill the recruiting class of 2020 with quality talent. The Hawkeyes also have yet to announce a new assistant coach to replace Andrew Francis, who left the program for California last month.