Fran McCaffery provided updates on his 2019-20 roster as the team gets ready for the season.

The playing status of Iowa senior guard Jordan Bohannon remains cloudy as the Hawkeyes hit their annual media day. The same could be said of the roster status of junior forward Cordell Pemsl, who was a notable absence from Wednesday’s festivities at Carver-Hawkeye Arena.

Iowa coach Fran McCaffery did offer some insights into both of their uncertain situations this season.

Pemsl was arrested for OWI in the early-morning hours of Sept. 20 and has not returned to practice since. Pemsl remains suspended from team activities, according to a school spokesman.

The 6-foot-9 forward has long been a favorite since arriving from Dubuque Wahlert for his on-court grit and hustle. He started 14 games as a freshman and averaged 8.9 points and 5 rebounds a game, but hasn’t been able to match that production since.

Pemsl missed all but two games last season with a knee injury, and he received a medical-hardship waiver in the offseason that gives him two years of eligibility. McCaffery gave an update about Pemsl's situation on Wednesday at the team's local media day.

“He took care of his legal part of his issues. He’s got some other things he’s got to work out. Maybe next week, we could have him back at practice,” McCaffery said.

Pemsl enters the season as a key depth piece. Senior Ryan Kriener, junior Luka Garza and sophomore Jack Nunge would be the primary post players on the roster, with former walk-on Riley Till potentially providing insurance.

Meanwhile, Bohannon had told Hawk Central in the spring that he was prepared to miss the season to recover from off-season hip surgery. McCaffery said Wednesday he hopes the veteran guard can test his hip soon before making a final determination on the season. 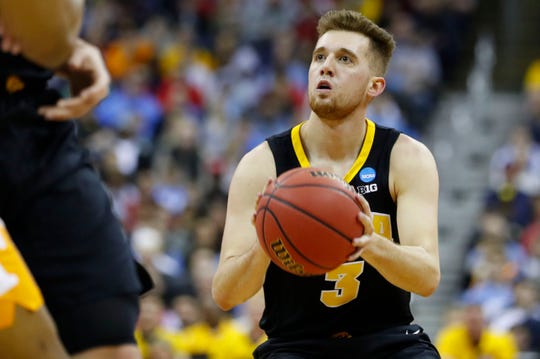 Iowa Hawkeyes guard Jordan Bohannon (3) shoots the ball in the first half against the Tennessee Volunteers in the second round of the 2019 NCAA Tournament at Nationwide Arena. (Photo: Rick Osentoski / USA TODAY Sports)

“He’s at practice. He is not practicing but is doing things on the floor. He’s running, he’s shooting. Not doing a lot of cutting," McCaffery said.

“We’re being very careful with him. Pretty soon, maybe another week or two, trying to go full tilt.”

Could Iowa fans see him in a few games this season, even if he decides ultimately to redshirt?

“Yes, we can," McCaffery said. "The bigger questions might be is that the smartest thing to do? I think he’s got to decide, are we really going to give it a go and see if it responds the way we hope it would?”