Iowa did what it needed to do in a rather uneventful season-opening win over SIUE.

IOWA CITY, Ia. — The opening-night cobwebs lingered for a bit, creating some early sluggish moments in front of a mildly full Carver-Hawkeye Arena. They didn’t remain for long. Iowa eventually hit the gas the way it should.

There wasn’t a massive run or absurd happenings, more so just gradual erosion of an inferior foe. The Hawkeyes finished Friday’s 2019 debut with an 87-60 win over SIU-Edwardsville, turning a 12-point halftime lead into a 20-point affair early in the second half. A nondescript, uneventful victory covered most of the typical season-opening spectrum. 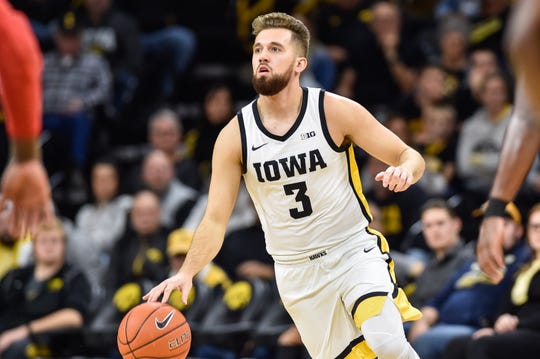 The leaders got theirs, with Luka Garza (20 points, 12 rebounds) and Joe Wieskamp (16 points) guiding the offensive show. Garza nearly put up a double-double in the first half, as Iowa hopped on the size advantage their big man offered.

"I just think we really followed the gameplan," Garza said. "We wanted to get the ball inside. We knew we had an advantage, so we wanted to get me Jack (Nunge) or Ryan (Kriener) involved and drive the ball in there. I think we did a really good job of that. I was just able to be put in great positions by my teammates who got be the ball."

Among those teammates who helped propel the runaway win was Jordan Bohannon. Until a redshirt decision is made regarding his repaired hip, his nightly workload will remain a pivotal topic. The Linn-Mar product saw his 96-start streak snapped as expected as he continues grinding from the bench. But Bohannon still made the most of his action.

He entered at the first half’s 14:03 mark, played 19 minutes, chipped in nine points and delivered the play of the night with a nifty halfcourt bounce pass to a cutting CJ Fredrick for an easy layup.

Nothing about Bohannon's life is simple right now. He's slogging forward as best he can.

"I'm starting to move a little more slowly back into things," Bohannon said. "... I'm still just taking it one day at a time, and coach (Fran McCaffery has been doing a good job about doing that. So I'm just going to continue rolling with that same mindset and mentality."

Other reserve highlights came with Joe Toussiant and Ryan Kriener. Each added nine points while playing 15 minutes. On a night where the Hawkeyes went a pedestrian 8-for-25 from deep, Toussiant did his part by draining a pair of 3-point attempts.

He swished a corner trey soon after checking in, which halted a futile 1-for-8 downtown start. An immediate Toussiant bounce-back following a rough exhibition is a nice sign to see this early in his career.

"I think the important thing for him is when he's not in the game is to study the game, so he knows what to do when he does come in."

With Friday now in the rearview, Iowa will begin studying a more rigorous foe up next. In comes DePaul Monday as part of the Gavitt Games event. The Blue Demons are 3-0 and will offer the Hawkeyes a much heftier challenge than their opening act.

With a swift turnaround right away, keeping it pushing after a cruise-control start should be even easier.