The Iowa big man made short work of North Florida, finishing with 29 points in an 83-68 Hawkeye win

Iowa center Luka Garza was frustrated early by North Florida, but got into a great rhythm. How did he do it, and what lesson did he learn? Listen: Hawk Central

Still, he was surprised when the 6-foot-7 post player sprinted over to block an early dunk attempt. Garza is four inches taller and 63 pounds heavier, after all.

It looked like it might be a long night for Garza, who missed his first five shots and appeared flustered.

Instead, he made short work of the Ospreys, making his next eight field goals to finish with 29 points in an 83-68 Hawkeye win before an announced crowd of 9,389 at Carver-Hawkeye Arena. Iowa (3-1) used 20 offensive rebounds to generate 24 points.

“I was a little hesitant at first. I didn’t do a good job finishing,” Garza said.

Garza said he settled into a rhythm after stepping out to hit a 3-pointer from the right corner and following that with a 12-footer from the left baseline.

The junior scored 30 points in Iowa’s last game, a win over Oral Roberts. He became the first Hawkeye to score at least 29 points in consecutive contests since Matt Gatens eight years ago.

Aminu, the reigning defensive player of the year in the Atlantic Sun Conference, finished with five blocked shots. Garza was hardly the only victim. But the game taught the Iowa center a valuable lesson that he intends to apply going forward.

“We knew he was a threat at protecting the rim,” Garza said. “I know a lot of teams are scouting me that I shot-fake a lot. So I’m trying to mix in when to go straight up into the guy, when to shot-fake. And I’m just trying to pick my moments not to always shot-fake and kind of lose my balance. It’s all about making adjustments in the game.” 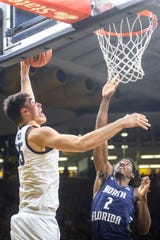 Iowa’s backup point guard, true freshman Joe Toussaint, came in to the game and committed an early aggressive foul. But unlike his last outing, when he followed that with another and promptly found himself on the bench, Toussaint played at a reasonable pace after that and had an strong game.

Toussaint finished with 10 points and four assists in 19 minutes. His three buckets came on strong drives that he finished with high-arcing layups, which he needs since he’s only 6-foot. He got fouled on two other drives and made all four free throws.

And his assists? Well, they were on no-look passes that only his teammates saw coming, including an early dart that Garza handled.

“I always glance the floor and I always make sure me and my teammates make eye contact before I do it,” Toussaint said. “And there it goes.”

Garza smiled when asked about playing alongside Toussaint.

“Every time he comes into the game,” Garza said, “I expect a flashy play.”

Toussaint arrived on campus in June at 177 pounds. He’s up to 190 now, and feeling ready to absorb the contact he knows is coming.

“In the Big Ten, there’s a lot of body-bumping, just hand-checking, a whole bunch of physicality,” he said. “I just want to make sure I’m in shape to be ready for that.”

That’s a style of basketball the New York native enjoys, he said.

“But I wasn’t as big as I thought I was,” Toussaint added.

Iowa point guard Joe Toussaint on getting ready for Big Ten physicality and the art of his no-look passes. Hear what he says: Hawk Central

Another strong second half for Fredrick

Iowa shooting guard CJ Fredrick missed all four of his first-half shots and was scoreless in 13 minutes. But, as he’s done in the past, he came out strong to start the second half. First, he lobbed a beautiful alley-oop pass to Joe Wieskamp that resulted in a crowd-pleasing dunk.

Fredrick then scored on a fast-break layup and followed with a 3-point swish. He finished with those five points and three assists in 19 minutes.

The second-half response from Fredrick, a redshirt freshman, was strong. But he can’t continue to be so quiet in the first halves going forward if he wants to be the impact player the Hawkeyes need. 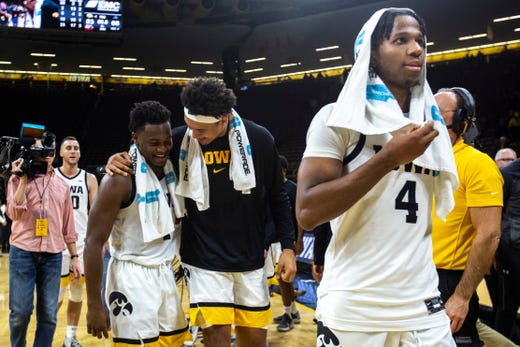 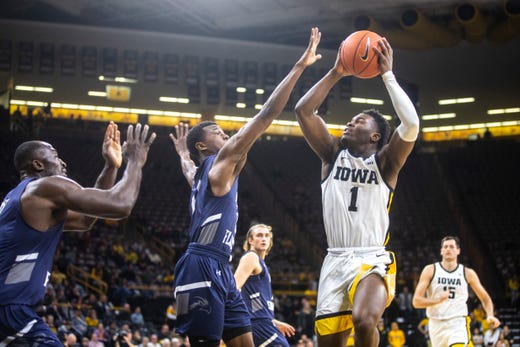 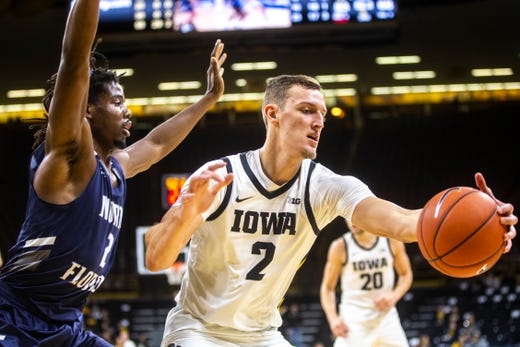 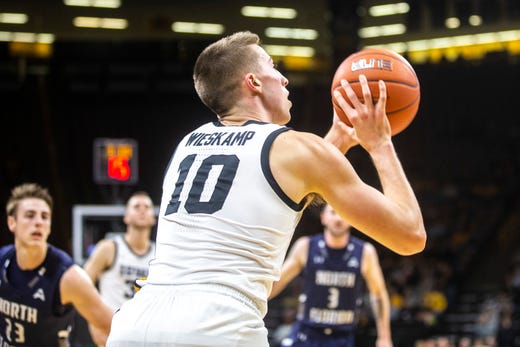 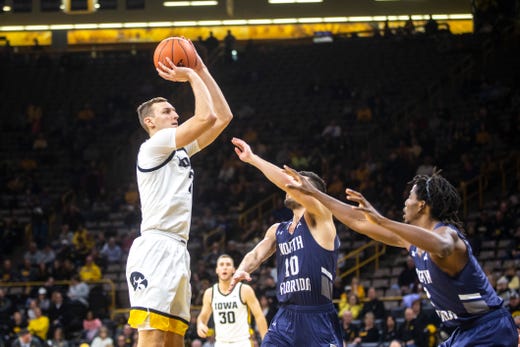 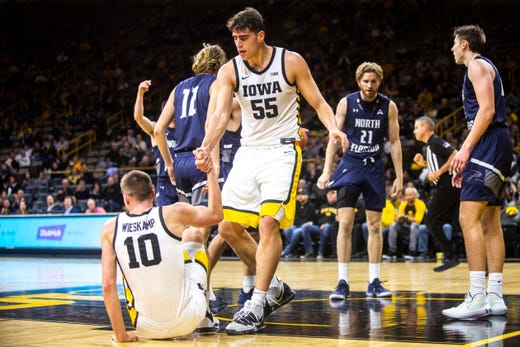 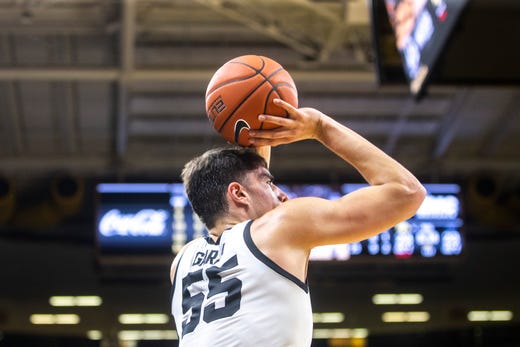 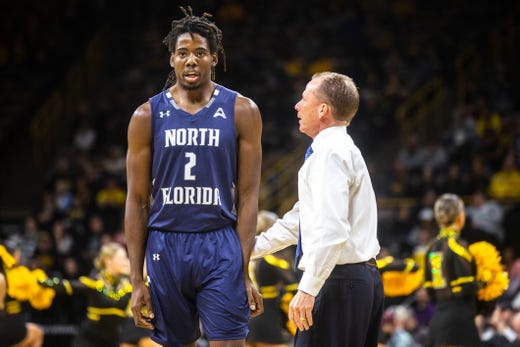 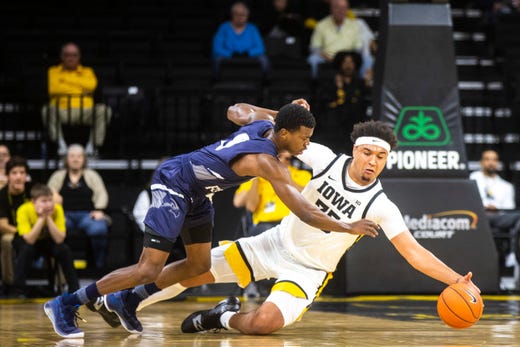 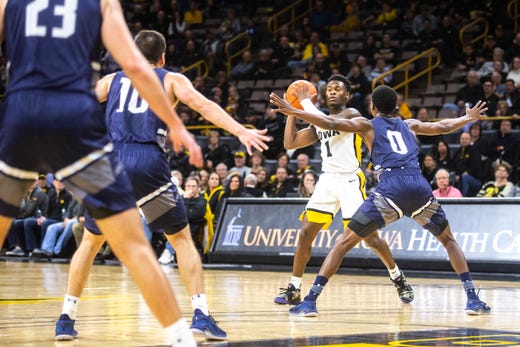 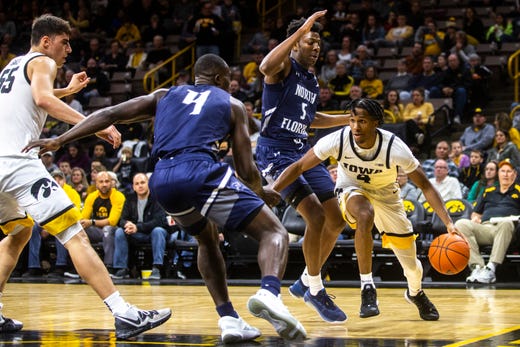 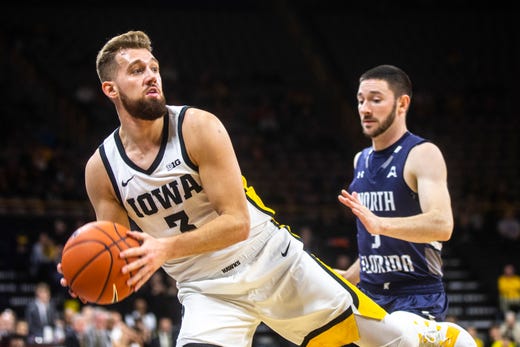 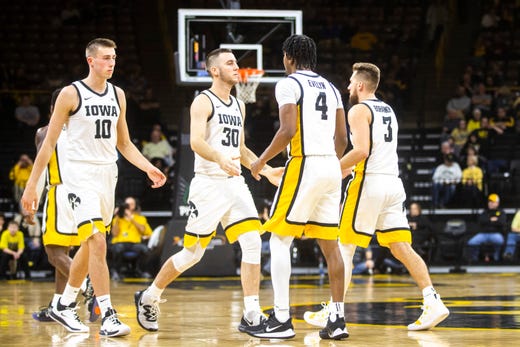 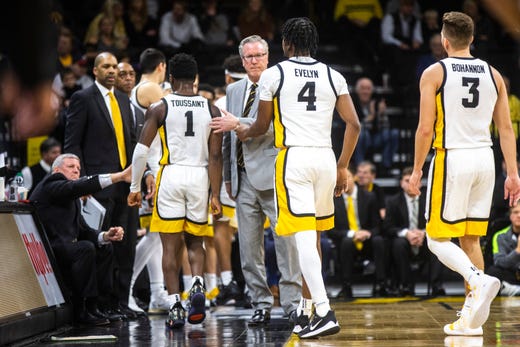 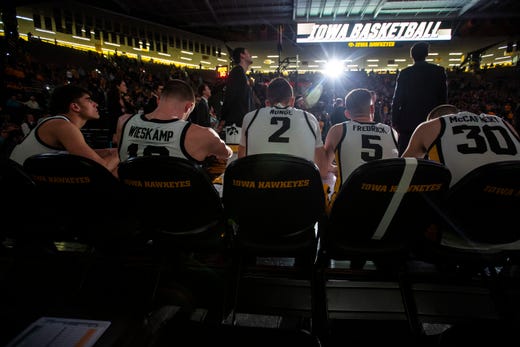 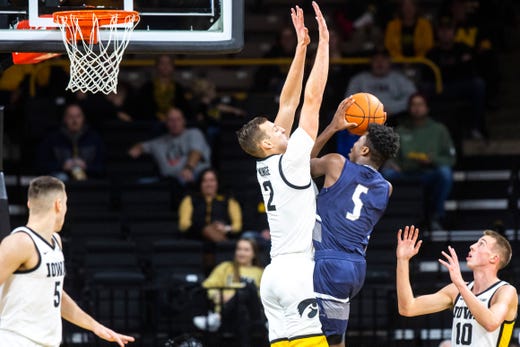 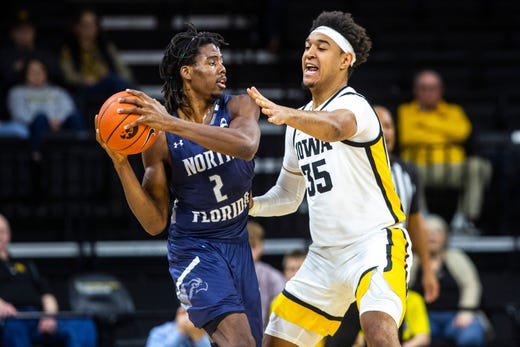 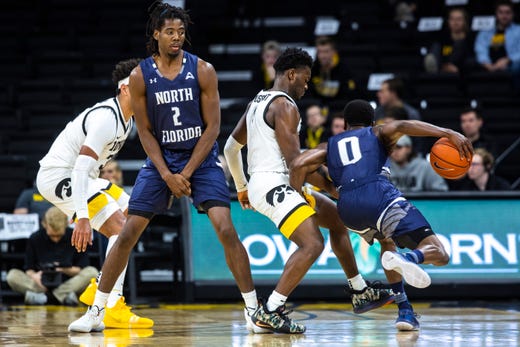 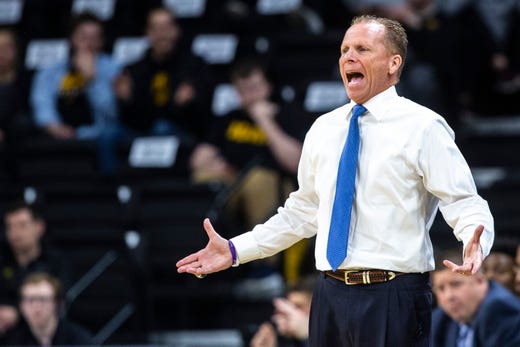 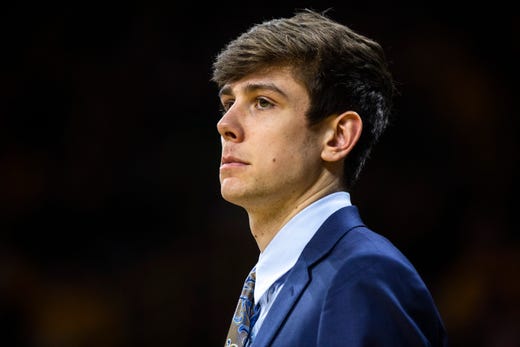 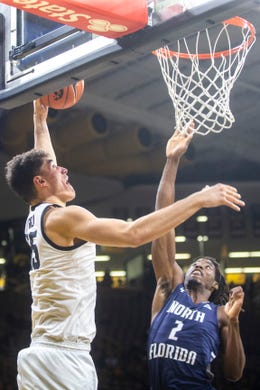 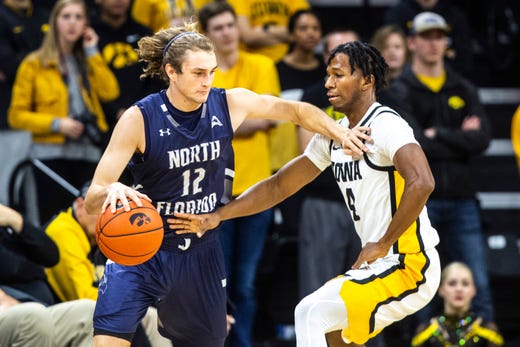 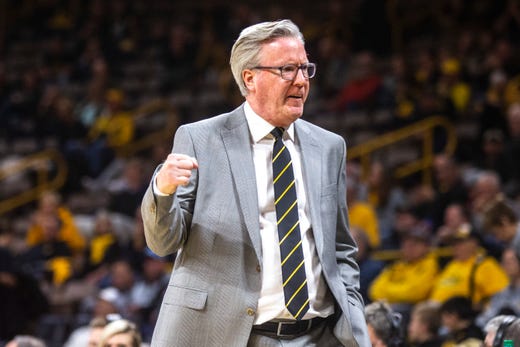 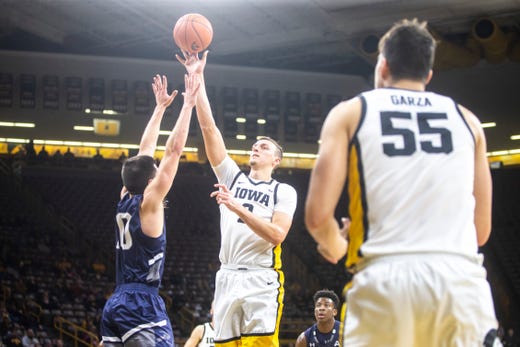 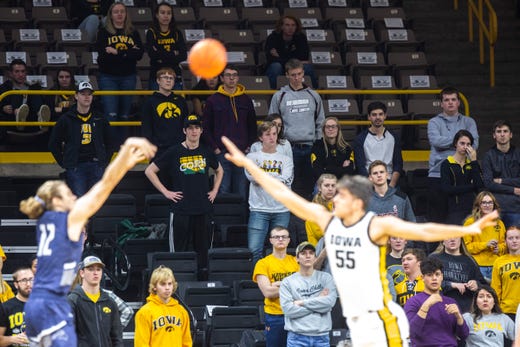 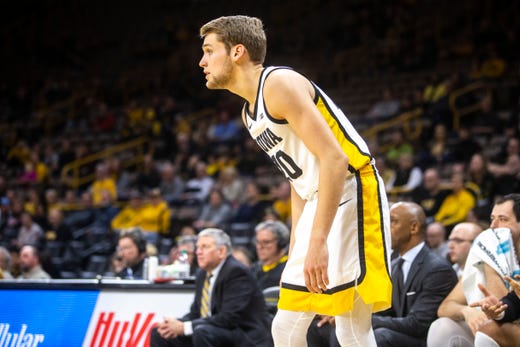 North Florida point guard Ivan Gandia-Rosa is a senior who is a member of the Puerto Rican national team. Iowa coach Fran McCaffery knew he needed to be the focal point of the defensive gameplan.

But it was still a satisfactory defensive performance, McCaffery explained. The Hawkeyes made him work, and wore him down a bit in his 35 minutes.

“We backed up the one time. We got a little confused on a switch one time,” McCaffery said of the defense on Gandia-Rosa. “The thing with him is, he had 192 assists last year, so if you get up on him, you’ll get on the side of him, he’ll find people. The other guys will make 3s. So I think from that standpoint, we limited his effectiveness.

“At the end of the day, you want to make that guy work. You want to wear him down. And he was tired. They took him out for a stretch.”