November tourneys have been telling for Iowa basketball: What will we learn this time?

The quality of the Hawkeye team is often revealed in November tournaments. This week, look for what happens at power forward and point guard.

November tourneys have been telling for Iowa basketball: What will we learn this time?

Iowa center Ryan Kriener knows his team can change the narrative around it by winning in Las Vegas. Hear more: Hawk Central

LAS VEGAS, Nev. — It’s late November, and that means we’re about to get an indication of what this Iowa men’s basketball team has in store.

Two years ago, there was a trip to the Cayman Islands, two disappointing losses to lower-level opponents and a sign that all was not well. The Hawkeyes finished 14-19.

Last year, the worm turned in the Big Apple. Iowa pounded Oregon and Connecticut to win the Empire Classic and serve notice that it would be a legitimate NCAA Tournament contender. The Hawkeyes made it back to the tourney, falling in overtime to No. 5 Tennessee one game short of a Sweet 16 berth.

“It’s going to be really important for us to be ready and come out from the start and kind of prove that we belong again, kind of like we did last year,” said Iowa senior guard Jordan Bohannon, who will attempt to play in both contests while battling soreness in his surgically repaired hip.

Added senior center Ryan Kriener: “Last year was a very us-against-the-world mentality. … Nobody thought we were going to be anything special, and there’s kind of the same feelings going around. We’re going to prove people wrong again.”

Iowa has played five home games that haven’t revealed much. Here are four things to monitor in Las Vegas. 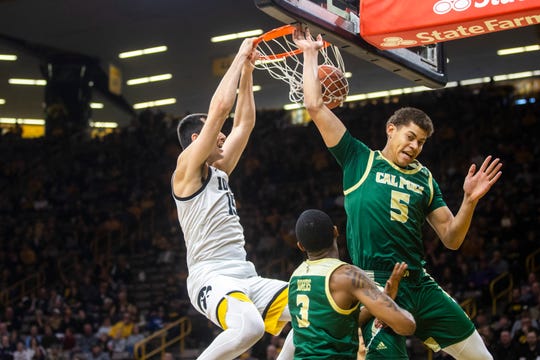 Iowa senior Ryan Kriener (shown dunking Sunday against Cal Poly) will likely take on a bigger role as starting power forward now that Jack Nunge is out for the season. How he handles that will go a long way in determining how far the Hawkeyes can go in March. (Photo: Joseph Cress/Iowa City Press-Citizen)

How will Hawkeyes proceed without Jack Nunge?

Iowa got some deflating news just before flying out Monday: Starting power forward Jack Nunge is lost for the season after tearing his right ACL in Sunday’s win over Cal Poly. The redshirt sophomore seemed to be becoming more comfortable with his role.

And now it’s someone else’s role.

It’s likely that Kriener will get the start in his place, at least initially. But that takes away a valuable bench contributor and puts the team’s two centers in the lineup together.

Kriener said he and junior Luka Garza had already started working together in practices before the Nunge injury. But it is an adjustment.

“We both like to roll into the block, take advantage of a mismatch. When I’m playing with Luka, I’ve got to play a little more perimeter-based, a little more flare screen, down screen, get shooters open, flash to the high post, try to feed him because he gets deep post position and he’s hard to stop there. So I’ve got to be more of a facilitator kind of player when he’s in there. With the guys really keying on him, it sets up back-cuts for me and offensive glass opportunities,” Kriener said.

That’s the ideal scenario for Iowa. We’re about to see how it plays out in reality.

The good news for the Hawkeyes is that all three of their post players (which include redshirt junior Cordell Pemsl) are experienced athletes who should be able to figure things out. The bad news is that they can’t afford any fatigue or foul trouble up front now.

Does Iowa have enough 3-point shooters to give Wieskamp space?

Bohannon thinks they do.

“It’s the same mentality as last year, to shoot open 3s and shoot layups,” he said.

But last year, Bohannon played 31 minutes per game and led the team with 79 3-pointers, at 38.3 percent accuracy. He is playing 19 minutes now and is 6-for-20 this season (30 percent). It’s unclear if he’ll be able to find his old form this winter or if he’ll shut things down next month and apply for a medical redshirt.

Why is that important?

Because small forward Joe Wieskamp is Iowa’s best player, and he needs space to work. He is a great shooter (59 made 3s, 42.4 percent last season), but equally effective on the drive. This year, defenses have been able to give him extra attention and his offensive efficiency numbers show the result. 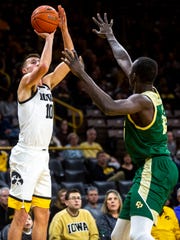 Wieskamp ranked 87th in the nation in offensive rating under Ken Pomeroy’s statistical measure a year ago. He is 483rd this year. And that’s been against lesser competition.

The Hawkeyes need to find a way to maximize Wieskamp’s vast skill set, starting with actually getting him the basketball. And that means someone else on the perimeter has to command some defensive attention.

Fredrick is the best option.

“I can really help this team, scoring-wise, and I know later on when we have a deep stretch (of difficult games), we’re going to need a lot of scoring and that’s going to open up things for other people, too,” Fredrick said after scoring 21 points against Cal Poly. “My teammates and coaches kept instilling in me to be aggressive.”

How will point guard spot play out?

Bohannon said he still considers himself a point guard, the position he started at for three years. But he’s been coming off the bench this season and often is playing off the ball. It’s unlikely that he will win that starting job back, unless his hip makes a miraculous recovery.

That puts the Hawkeyes down to essentially two options at point guard, since the graduate transfer Evelyn also appears to be more of a wing player.

Redshirt sophomore Connor McCaffery is the starter and he does two things very well: Move the basketball (5.4 assists per game) and convert free throws (14 of 15). He is not a scorer, though, at 6.4 points per game. And his 25 minutes per game also include time at small forward (and potentially even power forward in small lineups after the Nunge injury).

That means true freshman Joe Toussaint must prove that he’s ready for big-time college competition immediately. He’s shown flashes, but has also been inconsistent, with games when he gets out of control and is unable to rein himself in. That’s typical for a rookie. Iowa does not need a typical rookie in this spot at this time, however.

It all comes down to defense

Iowa’s defense has been tested only once this season, and it failed. That was in a 93-78 loss to DePaul of the Big East Conference. The Blue Demons shot 61 percent from the field and 55 percent from the 3-point arc.

The Hawkeyes are coming off their best statistical defensive showing, but it was against lowly Cal Poly (37 percent from the field, 14 percent from 3).

The Hawkeyes have been playing large stretches of both man-to-man and a 3-2 zone defense in the early going. Coach Fran McCaffery has also shown a willingness to extend pressure out to the three-quarters of the court, especially when Toussaint is in the game.

Bohannon said Iowa’s defensive communication is better than last season, when the team was 111th in Pomeroy’s adjusted defensive efficiency rankings. The Hawkeyes are 125th entering this tournament.

“I’m going to make sure everyone’s calm on the floor and not stressing out. I think if we play together, we have a really high ceiling as a team,” Bohannon said.

Texas Tech was in the national championship game a year ago, falling in overtime against Virginia. Many of the names have changed, but the overall philosophy has not. The Red Raiders are 12th in adjusted defensive efficiency, but also 29th in adjusted offensive efficiency, in Pomeroy’s rankings. They will represent one of the biggest challenges Iowa faces all season, not just in the non-conference.

Are the Hawkeyes ready to compete at that level, on both ends? We’re about to find out.

“The thing that I’ve been really preaching is hard work, preparation and execution. Those are things that anybody has. It doesn’t take any ability to have (those),” Kriener said.

“At this level, everyone can play. Everyone’s a good enough athlete, but it’s how well you can think the game a lot of the time.”