The graduate transfer from Valparaiso is coming off his most impactful game as a Hawkeye just when Iowa needs more options off a thin bench.

IOWA CITY, Ia. — The Iowa men’s basketball team found a third option at point guard just when it needed one most.

Senior Bakari Evelyn had been playing sparingly and rarely looked to shoot in the Hawkeyes’ first 11 games. He was scoreless in six of those.

But on Dec. 21 in Chicago’s United Center, Evelyn came to the forefront. His 15 points, seven rebounds and four assists were just what the Hawkeyes needed to hold off Cincinnati, 77-70.

“I’d definitely say it’s good to be able to show my ability and help my team win,” Evelyn said afterward.

Next for the Hawkeyes (9-3) is a 3 p.m. Sunday home game against Kennesaw State (1-11) on ESPNU. Then it’s 18 games of Big Ten Conference competition, in which Evelyn’s experience will be called on by coach Fran McCaffery.

Iowa was without starting point guard Jordan Bohannon against Cincinnati, and will be for the rest of the year. He had season-ending hip surgery Dec. 19.

True freshman Joe Toussaint made his starting debut in Bohannon’s place and was not up to that challenge. He was held without a point for the first time this season, committing three fouls and three turnovers in a season-low 4 minutes of playing time.

There will be better days ahead for Toussaint. The biggest revelation for Iowa was that the 6-foot-2 Evelyn was able to save that day.

“He's just a hard worker who is going to come in and do his thing,” Iowa center Luka Garza said of Evelyn. “And we all have confidence in him and we have seen this in him since the start of the season, and even in the summer, he's been playing really well for us. And it was great to see him have a night like this. He deserves that.” 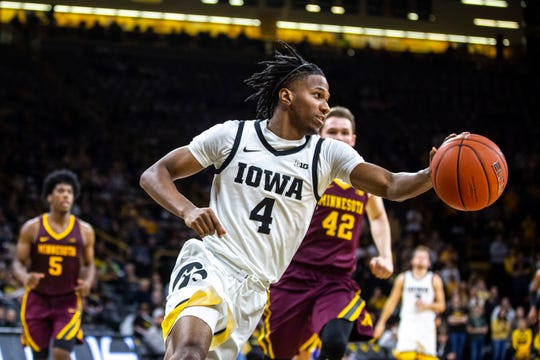 Iowa guard Bakari Evelyn (4) had been biding his time and searching for a role in his first 11 games for the Hawkeyes. On Dec. 21 against Cincinnati, Evelyn showed his true value with 15 points, seven rebounds and four assists. (Photo: Joseph Cress/Iowa City Press-Citizen)

Evelyn transferred to Iowa from Valparaiso to try one final season in the Big Ten. He was biding his time early on, searching for a role, until called on to provide 29 crucial minutes against Cincinnati. Evelyn made 3 of 4 3-pointers and all four of his free throws.

He said he had never lacked confidence in his shot, and his teammates were urging him to be more aggressive.

The only blemish on Evelyn’s performance against Cincinnati was his five turnovers. The Hawkeyes committed 24 in all. That can’t become a trend.

In addition to Toussaint, Iowa has sophomore Connor McCaffery, who can play point guard. But his father, Fran, also prefers to move the 6-5 Connor to a forward spot to get an extra ball-handler on the court. Faced with a thin bench, it gives McCaffery some needed flexibility.

That’s why Evelyn can be such an important player for the Hawkeyes. If he can steady things at the point and provide a scoring threat from the wing, McCaffery can feel comfortable experimenting with different lineups.

“I’ve played in big games before,” Evelyn said of his role in the Cincinnati win, Iowa’s third in a row.

“So I was just helping stay poised."