Iowa had only one easy game left on its schedule, and made the most of it by dominating from start to finish to the delight of its largest home crowd.

Iowa coach Fran McCaffery knew Cincinnati was going to make a charge. How did his team overcome it? Hear what he has to say: Hawk Central

IOWA CITY, Ia. — The Iowa men's basketball team had only one chance to breathe on its schedule between Nov. 28 and whenever the season ends in March.

That was Sunday, when one-win Kennesaw State came to Carver-Hawkeye Arena in the ultimate tuneup game for the Hawkeyes.

Iowa was in tune, all right.

The Hawkeyes did whatever they wanted on both ends of the court in a 93-51 victory, to the delight of the biggest crowd of the season so far.

Many of the fans may have come to see the "Star Wars" characters who posed for pictures in the concourse. If they stayed long enough, they saw Iowa senior Ryan Kriener pose for a long time while hanging from the rim after a second-half dunk that punctuated this win.

Kriener scored a career-high 20 points, smiling as he headed to the bench after making all nine of his shots.

The Hawkeyes were coming off a stretch in which they went 5-2 against top-level competition, with only one of those games played here. After this comes 18 Big Ten Conference games. And then tournament play.

So it was no wonder the Hawkeyes enjoyed this one so much. 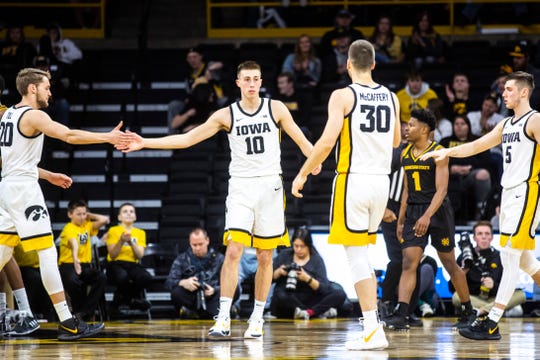 Iowa wasted no time asserting its dominance this time against the Owls (1-12), racing to a double-digit lead behind Garza. The 6-foot-11 junior had 14 points and five rebounds in the first half.

The Hawkeyes led 49-30 at intermission after gathering 10 steals and scoring 18 points off of turnovers.

Freshman point guard Joe Toussaint finished with six points, seven assists and four steals, shaking off a poor performance in his starting debut on Dec. 21 against Cincinnati, a game in which he committed three turnovers and three fouls while failing to score.

Iowa next plays Penn State in Philadelphia on Jan. 4.