If Fredrick can return to the thin Hawkeye lineup, that would be a big help. McCaffery updated the situation during a Monday-morning call.

Iowa basketball fans received a dose of encouraging news Monday morning, as Fran McCaffery sounded optimistic that starting guard CJ Fredrick would return from a foot injury at some point this season.

Fredrick, a 50% 3-point shooter, has missed Iowa’s last five halves of basketball with what’s being called a stress reaction in his left foot. Such injuries can linger for weeks and months; avoiding a stress fracture is the biggest concern. 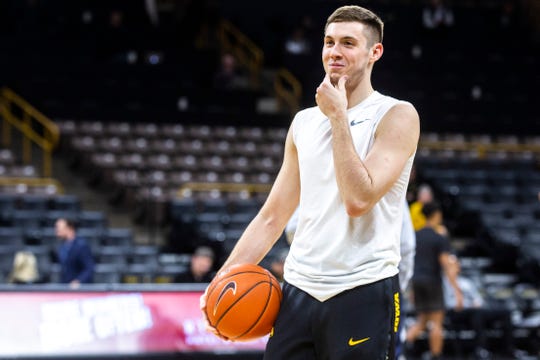 After receiving eight days of rest since playing in the first half against Penn State on Jan. 4, Fredrick has resumed light work and was shooting at Sunday’s practice.

McCaffery left open the possibility that Fredrick would return for Tuesday’s 7 p.m. game at Northwestern, but continued to classify the redshirt freshman as day-to-day. He has also said he wouldn't rush Fredrick back to the court.

“Yeah, I think he’ll come back at some point,” McCaffery said during a teleconference with a handful of beat reporters. “If it’s Tuesday … it’s literally day-to-day. If he has a bad day, he won’t. If he has good days, then he does play, then we’ll see how it goes from there. It’s just probably going to be like that the rest of the season."