Iowa coach Fran McCaffery explains why he played freshman CJ Fredrick all 20 minutes in the second half vs. Michigan. Listen: Hawk Central

IOWA CITY, Ia. — Iowa knows how to close out games at Carver-Hawkeye Arena, and Illinois was the latest victim Sunday.

The Hawkeyes went on a 17-3 scoring run to seal a 72-65 victory over an Illini team that entered play tied for first in the Big Ten Conference standings.

No. 18 Iowa (16-6, 7-4 Big Ten) pulled within a game of Illinois, thanks to big baskets late from Connor McCaffery and Luka Garza. Thanks to four consecutive free throws by CJ Fredrick.

And a Joe Wieskamp breakaway dunk that brought a capacity crowd to its feet one final time.

Garza led the Hawkeyes with 25 points and 10 rebounds. Fredrick and Wieskamp each scored 18. 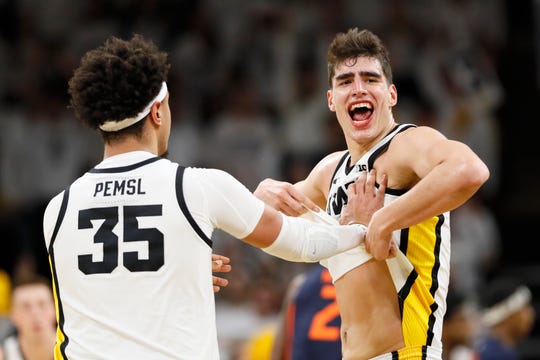 Two ranked teams and a good, old-fashioned Big Ten Conference border battle brought out the best crowd of the season at Carver-Hawkeye Arena.

Early on, the play on the court was uninspiring. Neither team was sharp on offense, with each committing seven turnovers.

But then Alan Griffin came off the Illinois bench to hit a pair of 3-pointers for a 23-15 lead, prompting Iowa coach Fran McCaffery to call a timeout.

Hawkeye junior center Garza emerged from that huddle determined to impose his will, and did so with 11 quick points to put his team in front and the sellout crowd on its feet.

That set up a tight, intense second half in which neither team gained separation.

McCaffery nailed a 3-pointer from the right corner to give the Hawkeyes a 64-62 lead with 3 minutes, 17 seconds remaining. It was his third trey of the game, tying a career-high. Iowa never trailed again.

Fredrick extended that lead with a free-throw line jumpshot.

Then Garza delivered the dagger, stepping out to the top of the key to drain a 3-pointer for a 69-62 Iowa lead with 37.6 seconds left. That was his career-high fourth triple of the game.

Iowa next plays at Purdue on Wednesday.