Iowa's CJ Fredrick becoming 'pain' for opposing teams, and that's just the way he likes it

Fredrick is Iowa's third-leading scorer and the most accurate 3-point shooter in the Big Ten. You can bet opposing coaches are noticing.

Iowa's CJ Fredrick becoming 'pain' for opposing teams, and that's just the way he likes it

Iowa guard CJ Fredrick is seeing more attention from opposing defenses. He knows he must adjust. Hear what he says: Hawk Central

“It’s going to be a pain in the ass to see him the next four years,” Illinois coach Brad Underwood said Sunday after Fredrick scored 18 points to help the Hawkeyes down his Illini 72-65.

That’s the kind of praise you’re going to get when you’re the most accurate 3-point shooter in the league as a first-year player.

And Fredrick said he’s starting to sense that opponents are making him a more central part of their scouting reports. In Iowa’s loss at Maryland on Thursday and in the Illinois win, he had to work harder to get open. 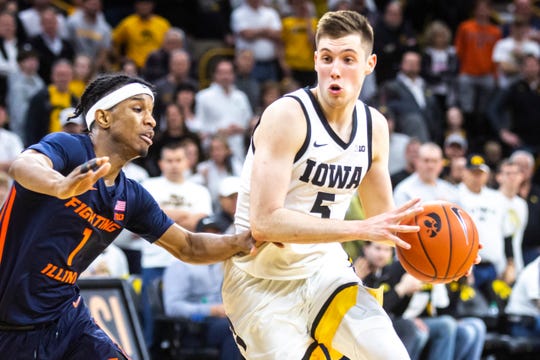 Iowa guard CJ Fredrick (right) is getting more attention from opposing defenses these days. The redshirt freshman welcomes it. He averaged 14.5 points over his past six games and leads the Big Ten Conference in 3-point shooting accuracy at 47%. (Photo: Joseph Cress/Iowa City Press-Citizen)

Fredrick has averaged 14.5 points in the six games since returning from a stress reaction in his left foot. He has been a steady, heady player at both ends of the court for a Hawkeye team that desperately needs him to be. Iowa coach Fran McCaffery relies on an eight-player rotation, and often only four of them provide the scoring.

Fredrick has typically been one of those. And he’s not afraid to let opponents hear about it.

“I like to do a little bit of everything on the court. Pass it. Score it. Run around. Bring a lot of energy. Play defense. That’s kind of how I was in high school, too (at Covington Catholic in northern Kentucky),” Fredrick said.

“Not a lot of people liked me.”

Joe Wieskamp is certainly glad to have Fredrick around. The sophomore starts opposite him on the wing, and the two can make things difficult for opponents with their long-range shooting combined with an ability to drive.

The Illini made an effort to close out strong on Fredrick and Wieskamp at the 3-point line. The adjustment was to beat Illinois off the dribble, as the duo combined to make 9 of 14 shots from inside the arc.

Fredrick showed off a nice touch on some floating jump shots.

“We realize that CJ and I are two of our better perimeter players, so they’re going to show a lot of attention to us,” Wieskamp said.

Fran McCaffery said Fredrick has had to get accustomed to battling superior athletes in the Big Ten. He took a redshirt season last winter, in part, to prepare for that.

“It’s just a whole different level of physicality and athleticism,” McCaffery said. “He has to work harder.”

Fredrick said he didn’t want to think about whether he was developing a strong reputation around the Big Ten.

“I’m just trying to help our team win games and do whatever we can. Try to be a problem for opposing teams,” he said.

But he did understand Underwood’s comment was a positive development. It shows he’s getting under the skin of opposing coaches and players.

“I just like playing with a lot of energy, a lot of heart,” Fredrick said.

“I was running a lot of screens back and forth, and a lot of guys don’t like to guard that. But that’s kind of what I’ve been labeled for, even when I was in high school.”

And now in college.