Luka Garza is a fast-rising star for No. 17 Iowa, and he welcomes the attention

The Hawkeye junior center is leading the Big Ten Conference in scoring, and the university is backing him with a sophisticated promotional campaign.

Luka Garza is a fast-rising star for No. 17 Iowa, and he welcomes the attention

Luka Garza could try to tune out all the national acclaim that’s coming his way this winter.

But why would he?

Iowa’s junior center has worked hard to put himself in the limelight. And that is precisely why Garza hasn’t let that slow him down.

“He’s the kind of guy that (publicity) brings another level of confidence for him. He likes hearing that kind of stuff,” said Iowa guard Connor McCaffery, who has known Garza since their high school days and is now his roommate. “But at the same time, he already thought: ‘I’m that guy. I can do this.’ Now that he’s getting recognition for it, he’s almost validated in a sense.”

Iowa center Luka Garza is getting used to being surrounded by reporters these days. Here, he speaks after a Hawkeye home victory over Illinois on Feb. 2. (Photo: Joseph Cress/Iowa City Press-Citizen)

Garza is putting up the kind of numbers that turn heads, just not his own. He leads the Big Ten Conference in scoring at 23.1 points per game and is fourth in rebounding at 9.9. He has surpassed 20 points in each of the Hawkeyes’ past nine games, something that hasn’t been done here since Fred Brown in 1971. He is climbing Iowa’s career scoring chart at a dizzying pace, now up to 1,374 to move past Bruce King and Ed Horton for 17th all-time.

And he’s shown no signs of slowing down.

Garza will take those gaudy statistics into Assembly Hall on Thursday, where No. 17 Iowa (17-7, 8-5 Big Ten) aims for a rare league road victory over Indiana (15-8, 5-7), which has lost four consecutive games. Tipoff is at 7 p.m. Fans can tune in on the Big Ten Network, where Garza has become appointment TV.

Garza is the center of an Iowa promotional campaign

Iowa has had two consensus first-team all-Americans in 118 seasons of competing in men’s basketball: Murray Wier in 1948 and Chuck Darling in 1952.

That was long before college sports information departments started sophisticated promotional campaigns for their top athletes. And that means Garza may already be the most highly publicized men’s basketball player in Hawkeye history. 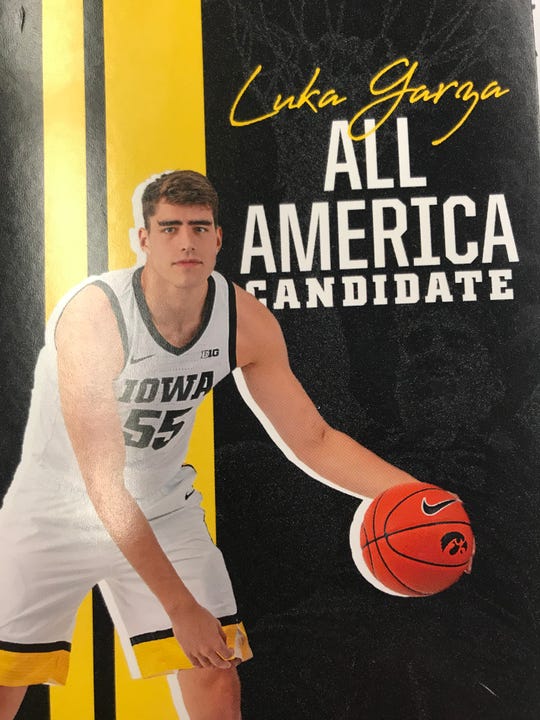 The University of Iowa sports information department is busy promoting Luka Garza for the all-America team, including this spiral-bound notebook that is being given to reporters. (Photo: Mark Emmert/Des Moines Register)

Iowa’s media notes these days always include a three-page packet pointing reporters to Garza’s accomplishments and accolades. The university created spiral-bound notebooks with Garza’s picture and the words “All-America candidate” on the front and back to hand out at Saturday’s home game vs. Nebraska. Next week, Iowa will debut a website devoted exclusively to coverage of Garza.

Not that opposing coaches need any reading material about Iowa’s 6-foot-11 mega-star. Every Hawkeye postgame now includes effusive praise, sometimes unprompted, from those who have tried (and failed) to devise a game plan to stop him.

“He is, in my mind, as good a player as there is in the country right now. He just plays so hard,” Nebraska’s Fred Hoiberg said after Garza scored 22 points despite frequent double- and triple-teams in Saturday’s 96-72 Hawkeye victory.

“That is the thing I love about that kid more than anything. He obviously has a skill-set; you can’t stop him in the paint when he gets an angle. He carves out space as well as anybody I have seen at this level. He is able to step out and knock down the 3. But the thing I like most is his intensity, effort and relentlessness, and it is a good lesson for our young players to go out there and play with that type of effort every possession. It doesn’t matter if it’s the first possession or the last, he is running the same way down the floor.”

Garza is in the running for national player of the year, a finalist for both the Wooden Award and the Kareem Abdul-Jabbar trophy given to the nation’s top center.

Fran McCaffery, who recruited Garza when he was a pudgy teenager honing his skills at Maret School in Washington, D.C., and on the AAU circuit, said he hasn’t noticed any change now that he’s becoming a household name.

“He’s just a grinder and he keeps working and he stays locked in. We just keep encouraging him to keep doing what he’s been doing. He knows how we feel about him,” McCaffery said Wednesday.

“His teammates love him and appreciate him. It’s pretty much business as usual.”

Garza, who averaged 13.1 points and 4.5 rebounds as a sophomore, has admitted that he let a highly productive stretch of games last year get into his head. The attention was great; his reaction was not. He averaged just 4 points in his next four outings.

Garza’s durability and reliability have been amazing this season. He is averaging 31 minutes per game. He hasn’t been held below 16 points in any Big Ten contest.

He welcomes the attention now.

“I think I have such blinders on to what I want to do, what I want this team to be able to achieve, that all of that stuff doesn’t really affect me,” Garza said.

“I work too hard to let that affect me. That’s what comes when you work as hard as I do.”