No. 18 Hawkeyes 'out-hustled' in humbling home loss to Purdue

The Hawkeyes are at a loss to explain lethargic showing in home finale, but most re-focus quickly with crucial road game at Illinois next.

No. 18 Hawkeyes 'out-hustled' in humbling home loss to Purdue

Purdue coach Matt Painter has a 17-8 record all-time against Iowa, including convincing wins in the last four meetings. Hawk Central

After a dreary 77-68 loss to Purdue on Tuesday, Iowa was also the team trying to explain how things unraveled so quickly and thoroughly at Carver-Hawkeye Arena.

“Maybe this is something we needed toward the end of the year to just kind of refocus and be more motivated,” Iowa center Luka Garza said after a record-setting night for him that was anything but festive.

The Boilermakers (16-14, 9-10 Big Ten) jumped Iowa early, building a 42-21 first-half lead that proved to be insurmountable. They grabbed an incomprehensible 21 offensive rebounds, good for 20 points. They turned 15 Hawkeye turnovers into another 25 points. They seemed to get to every loose ball while Iowa’s players appeared to have heavy legs.

“I really hate getting out-hustled more than anything,” Garza said.

“I don’t think we had the hunger that we needed to have to win this game. They played like hungry dogs. They were all over us, trying to get on the glass. They were everywhere. … They were a team that played like they needed this win.” 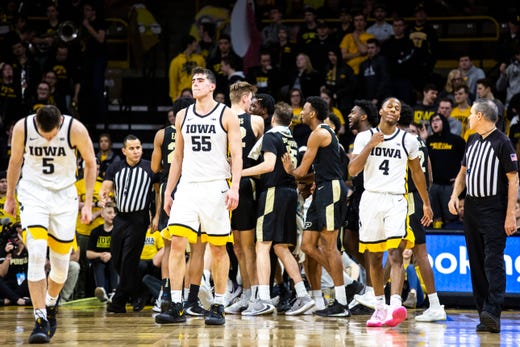 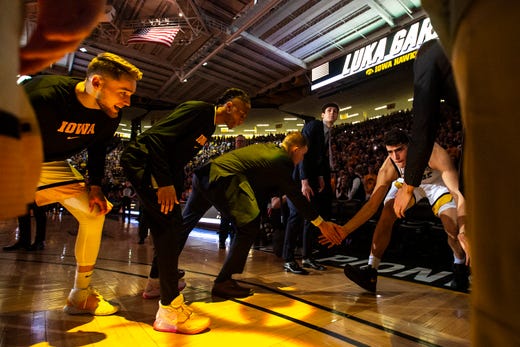 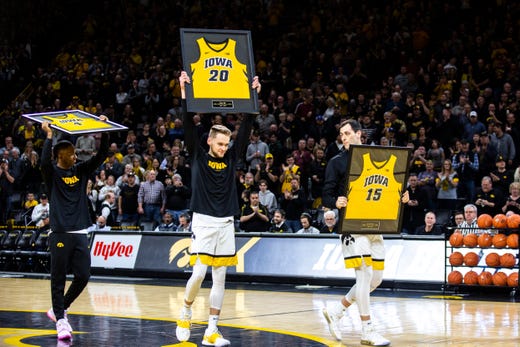 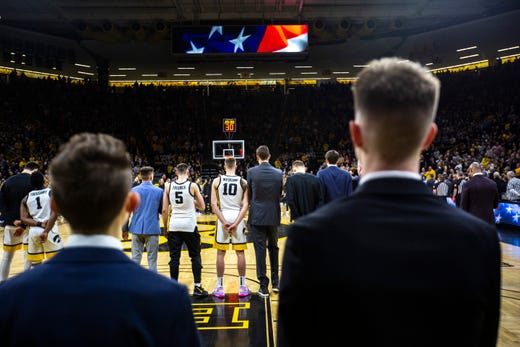 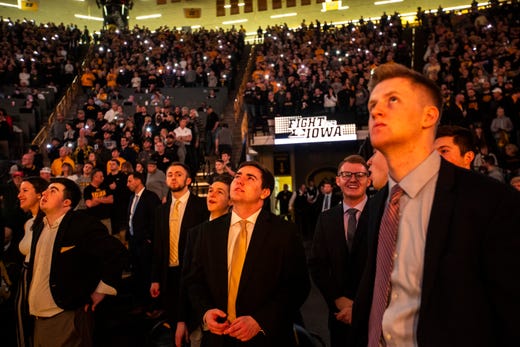 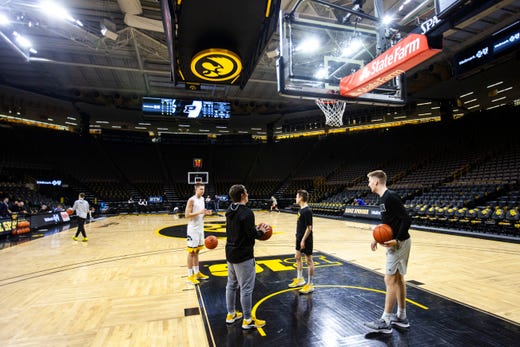 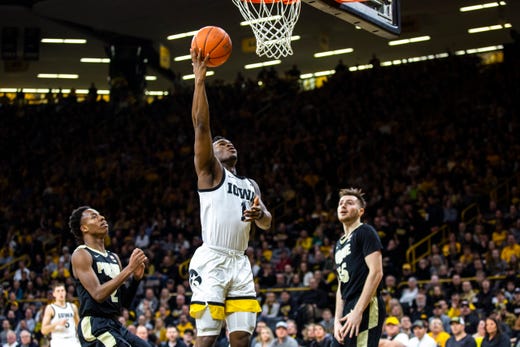 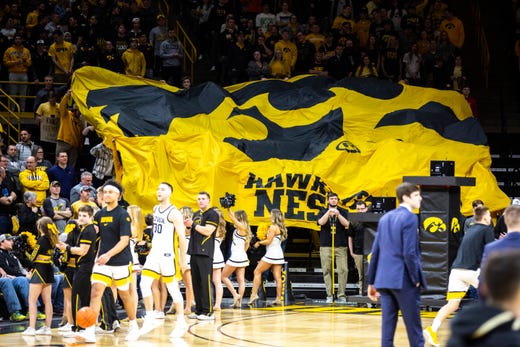 Students in sitting in the "Hawks Nest" hold up a banner with a Tigerhawk logo on it during a NCAA Big Ten Conference men's basketball game, Tuesday, March 3, 2020, at Carver-Hawkeye Arena in Iowa City, Iowa. Joseph Cress/Iowa City Press-Citizen
Fullscreen 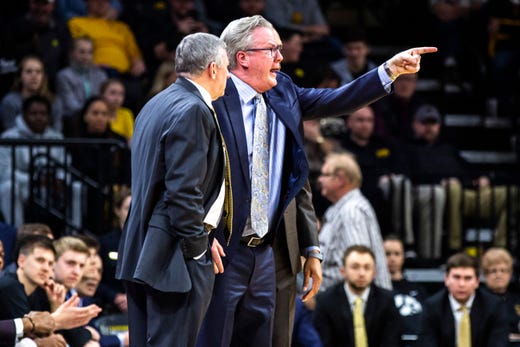 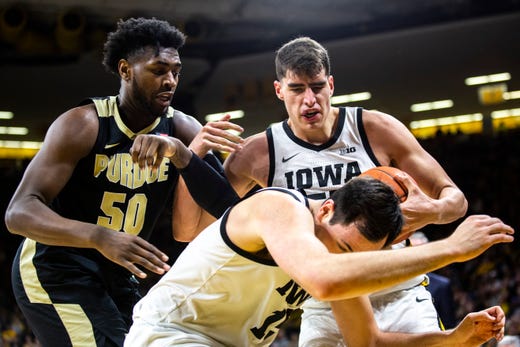 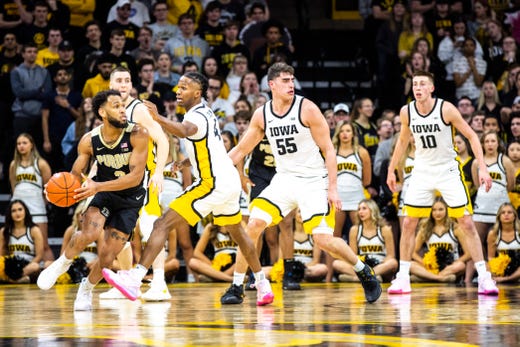 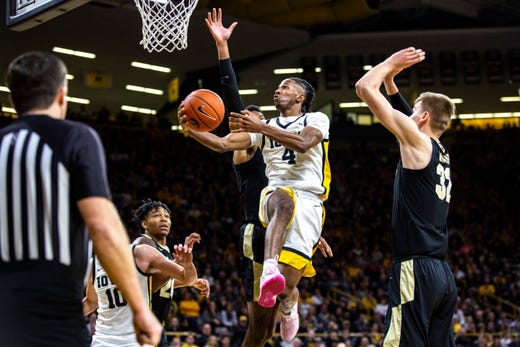 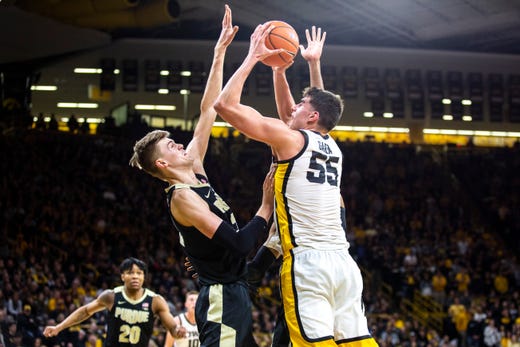 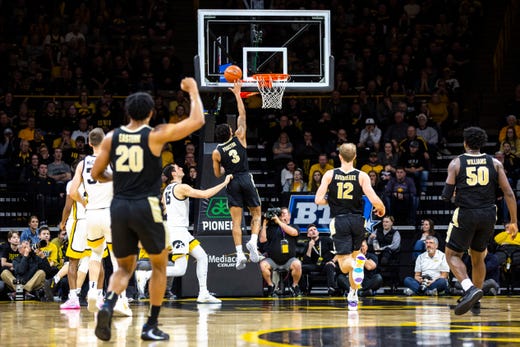 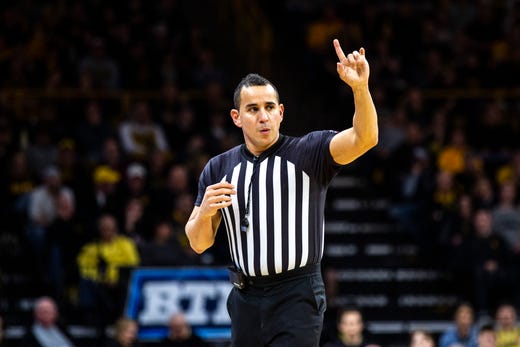 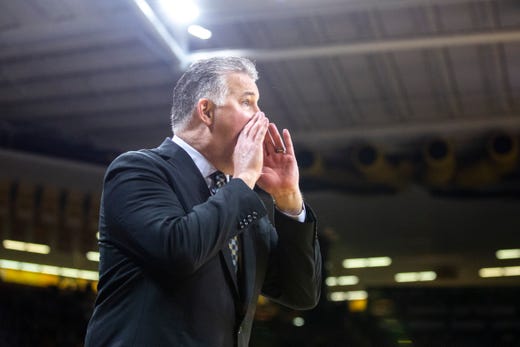 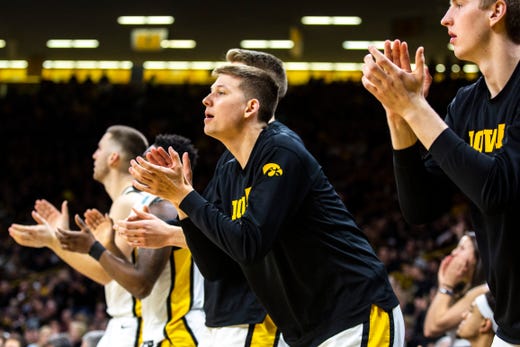 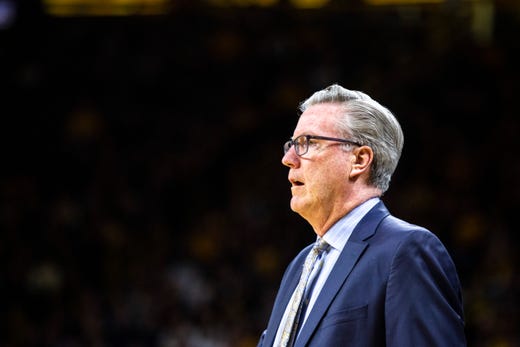 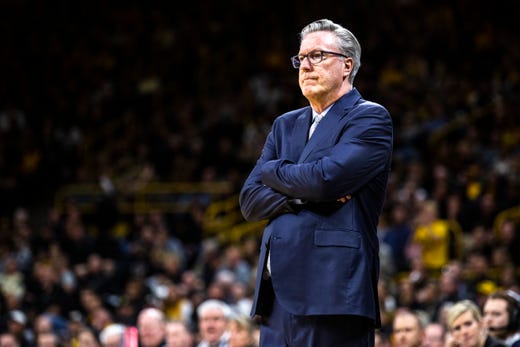 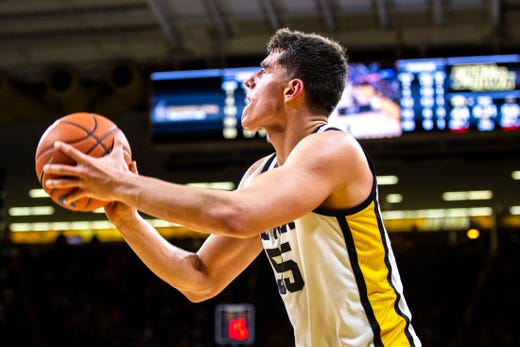 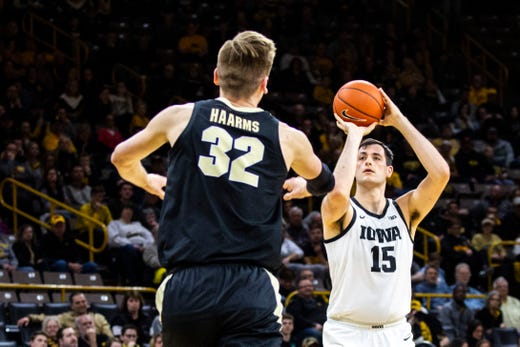 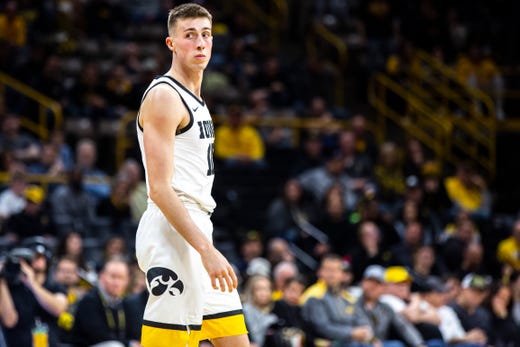 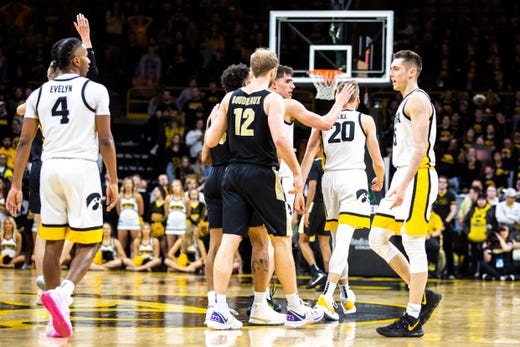 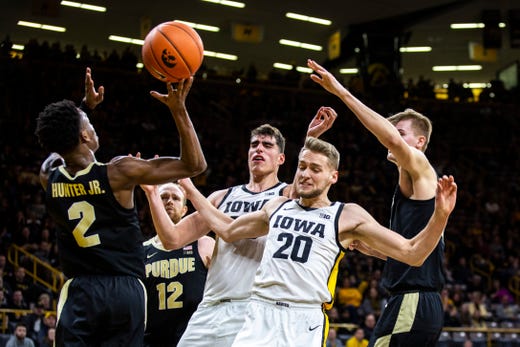 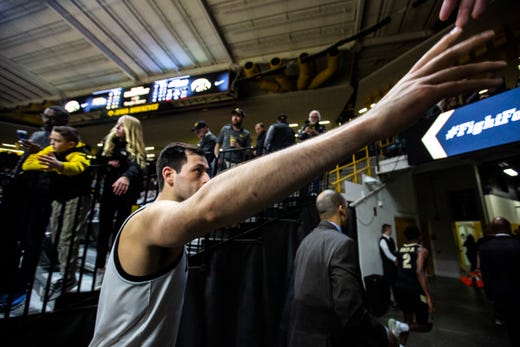 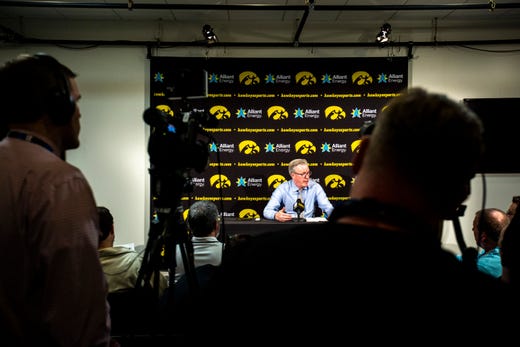 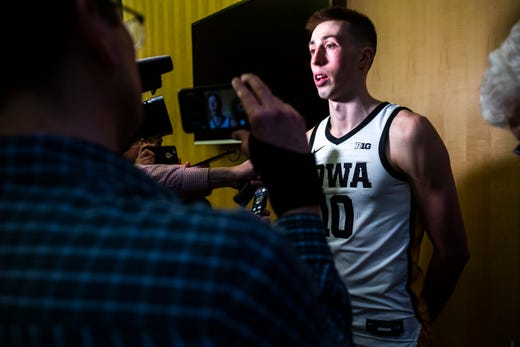 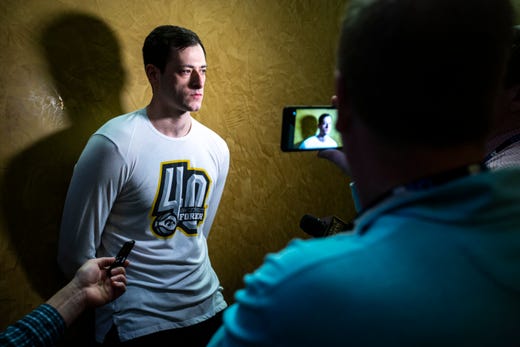 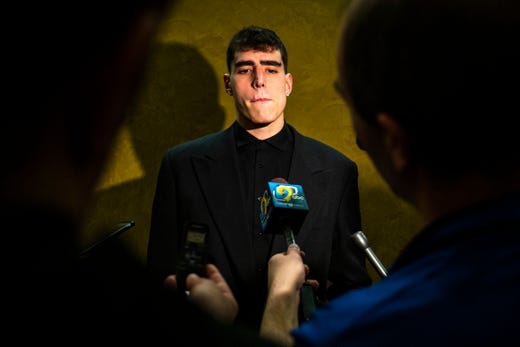 It’s true that Purdue is trying to play itself into the NCAA Tournament with a late-season surge. It’s also true that the Boilermakers had dropped four of their previous five games before Tuesday. And that they had hammered the Hawkeyes 104-68 in West Lafayette on Feb. 5.

So Iowa should have been ready. And the Hawkeyes clearly weren’t.

Iowa coach Fran McCaffery must have sensed this early, because he lit into his players during the first media timeout, after his son, Connor, had airballed a 3-point attempt and Purdue already owned an 11-4 lead. Fran McCaffery has not had many moments like that this season as his No. 18 Hawkeyes (20-10, 11-8) climbed up the national rankings and secured a second consecutive NCAA berth.

“So there were four or five things that happened that were very uncharacteristic of our team. I felt like, ‘OK, I’ve got to jump them here to get them to focus a little bit better and to lock in.’”

Iowa head coach Fran McCaffery also got a technical foul in a frustrating first half for the Hawkeyes. Hawk Central

The Hawkeyes never really did, though. There was a six-minute stretch to open the second half in which they cut a 17-point halftime deficit to 47-36. But that was it. A Joe Wieskamp layup with 12 seconds left provided the final margin, the only time Iowa got within 10 points in the second half.

Garza didn’t want to say the Hawkeyes were overconfident after 13 consecutive home victories. But he did allow that they seem to play better when they’re viewed as underdogs.

“It doesn’t matter if we’re ranked higher than other teams,” Garza said after scoring 26 points to reach 712 on the season, the best ever in program history.

“We have to play like they did (Tuesday) in terms of the hustle that they played with. You’ve got to play like that every single game. … It’s the way we usually play basketball.”

Iowa center Ryan Kriener can't explain a flat performance against Purdue. But it wasn't the way he wanted his home career to end. Listen: Hawk Central

Kriener picked up two fouls in the first half and could only stew on the bench while his team fell behind. The 6-foot-10 native of Spirit Lake started the second half in place of point guard Joe Toussaint as McCaffery looked for more size to help with a rebounding disadvantage that had bordered on ridiculous.

It helped for a bit, as the Hawkeyes went on an 11-5 run. Kriener finished with nine points, three blocked shots and two rebounds.

“I don’t really have an explanation for it right now,” he said succinctly when asked what was amiss with his team.

“They’re playing for their NCAA Tournament lives right now. … We needed to bring a better edge.”

Kriener hyperextended his knee in the second half while racing over to contend with Purdue center Matt Haarms. He said it’s happened before and he is confident he’ll be able to recuperate in time for Sunday’s’ regular-season finale at Illinois.

That game could have big implications for the Big Ten race. If Illinois loses at Ohio State on Thursday, then the winner of Sunday’s game in Champaign would earn a top-four seed and a double-bye in the conference tournament.

You know Kriener will be eager to be on the court for that one.

As for Tuesday in his Carver-Hawkeye swan song, Kriener admitted it was a disappointing finale.

“Everyone has visions of getting that curtain call and all that stuff,” he said. “Ultimately, I’m very fortunate with being able to live out a lot of dreams here and I’m very grateful with the crowd (of 13,216) we had.”

Iowa junior forward Cordell Pemsl played only four minutes Tuesday before limping to the bench. He was helped to the training room and spent the rest of the first half there. He rejoined his teammates on the sideline for the second half, but didn’t play again.

“He got hit in the leg, which to be honest with you, I don't think in and of itself would be a big deal, except that he keeps getting hit in the same spot,” McCaffery said. “It's like the third or fourth time this happened to him.

“So that was the issue. Hopefully he'll be better by Sunday.”

The Hawkeyes sure hope so. Pemsl had averaged 5.5 points and 5 rebounds in his previous six games. He was just starting to be the impactful player he was as a freshman. His absence would leave McCaffery with essentially a seven-player rotation.