Without Hawkeye legend Ronnie Lester, 'Kobe and the Lakers' might never have happened

When Bryant declared for the NBA draft in 1996 as a 17-year-old high school senior, Ronnie Lester was the only member of the Lakers staff who had seen Bryant play.

Without Hawkeye legend Ronnie Lester, 'Kobe and the Lakers' might never have happened

Kobe Bryant was a legend to the world, but to his daughter Gianna Bryant, he was so much more. USA TODAY

One could argue that Kobe Bryant never would have become a Los Angeles Laker had it not been for former Iowa Hawkeye basketball great Ronnie Lester.

When Bryant declared for the NBA draft in 1996 as a 17-year-old high school senior, Ronnie Lester was the only member of the Lakers staff who had seen Bryant play.

“I rarely saw high school players back then, but every year I would go to the McDonald’s High School All-Star Game showcasing the top 24 seniors. As a scout, it gave me a head start to see top prospects early.

“I realized immediately that Kobe was a serious talent. He just looked so advanced compared to the other kids and his footwork was amazing for a 17-year-old. He reminded me of Michael Jordan. When I shared that with friends back home in Chicago it raised a lot of laughter and derision because Jordan was on his way to winning his fourth NBA championship that spring and nobody played like Jordan.” 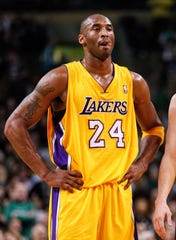 Lester’s Los Angeles career began with an NBA championship as a member of the 1985 “Showtime” Lakers. He was a backup point guard to Magic Johnson, playing sparingly on his one good leg. After retiring in 1986, Lester transitioned from player to respected front office executive who would win six more championship rings spanning three decades — first as a scout and later as the team’s assistant general manager.

Bryant's announcement that he was skipping college to enter the draft was audacious. Only a handful of kids — most recently Kevin Garnett in ’94 — had declared for the draft out of high school. As soon as he heard the news, Lester called Jerry West — the Lakers general manager whose now iconic silhouette serves as the NBA logo — urging him to take a look at the kid. Intrigued, West flew Kobe along with several other draft prospects to Los Angeles to work them out. 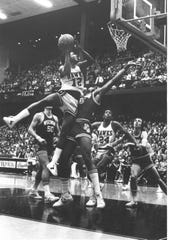 “Jerry fell in love with Kobe and immediately arranged to invite him back to L.A. for a private workout. We met at a tiny, dingy YMCA in Inglewood, not far from where the Lakers played games at the Forum but far enough out of the way to assure no one would find out.

"Jerry brought in former Lakers great Michael Cooper to work Kobe out. Though 'Coop' had been a five-time first-team all-NBA defensive player, we watched Kobe run circles around him. He did whatever he wanted to poor Coop. From that moment forward, Jerry West was on a mission to draft Kobe.”

The problem was the Lakers had the 24rd draft pick, and there was no way that Kobe would fall that far. It was reported that the New Jersey Nets might take him as the No. 8 pick. West began a campaign to move up in the draft. Lester said West worked around the clock, full-court pressing every team with early draft picks in order to create a plausible chance to get Kobe.

By draft day, the only hope came at the 13th spot held by the Charlotte Hornets, who were willing to draft Kobe and then trade him for Lakers starting center Vlade Divac.

This scenario was problematic for several reasons. First, it didn’t seem likely Kobe would fall to the 13th pick. Second, the Lakers would be bucking an unwritten NBA rule back then that you never traded a “big” for a “small.” And finally, Vlade was popular with both the Lakers coaching staff and fans.

“When New Jersey took Kerry Kittles instead of Kobe at the eighth spot,” Lester said, “we knew we had a chance. Losing Vlade was a risk but we were gambling that we had a decent shot at landing Shaquille O’Neal, who was about to become a free agent.”

West’s plan worked to perfection. Kobe fell to 13th, Charlotte drafted him and made the trade for Divac while the Lakers then used the 24rd pick to select Derek Fisher out of the University of Arkansas-Little Rock. A month later, West signed Shaq, culminating a brilliant and remarkable series of moves. O’Neal would team with Kobe for three Laker championships while “Fish” and Kobe became friends and running mates, winning five championships together for the purple and gold. 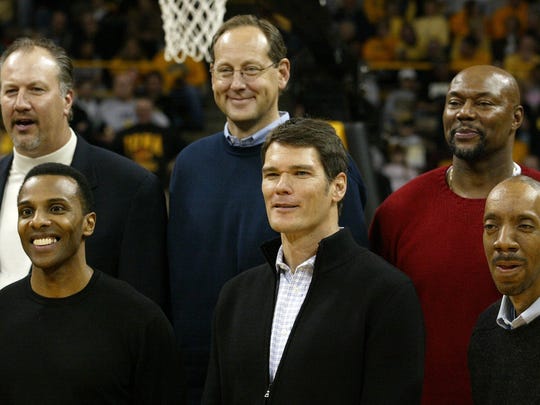 Members of Iowa's 1980 Final Four team are honored at Carver-Hawkeye Arena in 2005. In front, from left, are Ronnie Lester, Jon Darsee and Kenny Arnold, and in back, from left, are Mike Heller, Steve Waite and Vince Brookins. (Photo: Register file photo)

Asked what he remembered about Bryant during the 10 years they overlapped, Lester pointed out that because front-office management held the fate of a player’s future in their hands, he rarely developed close relationships to players. From the distance of the front office, Lester said Bryant's drive and determination to do things his way set him apart.

At one point early in Bryant's career, an exasperated assistant coach told Lester that he had never sat through so many coaching meetings called to discuss one player. While Lester described Bryant as strong-willed and sometimes stubborn, he also commented on the quality of his personality, his intelligence and his commitment to outwork everyone.

“Kobe’s parents and sisters moved to L.A. and shared a house with him for the first few years, which was a big help. Kobe was so focused on basketball that I don’t think he had any friends and I don’t think he wanted any,” Lester said.. “The other players found him awkward to relate to. He was a kid and they were grown men with families or other responsibilities, whereas Kobe was solely consumed by basketball. He wanted to practice, work out, or watch film, 24/7. He was a fanatic about his work ethic. I never saw another NBA player work harder than Kobe.”

Ronnie Lester signs an autograph for Rhonda Evans of Tiffin before he and other members of the 1980 Final Four team are recognized at FRYfest at the Coralville Marriott on Friday, Sept. 1, 2017.  (Photo: David Scrivner/Iowa City Press-Citizen)

Lester's observations remind me of what Peter Schjeldahl, the great art critic, once wrote about Pablo Picasso for the Village Voice:

“Picasso was simple in all the ways that counted. People make the mistake of supposing that genius is complicated. It is the opposite. We regular folk are complicated — tied in knots of ambivalence and befogged in uncertainty. Genius has the economy of a machine with a minimum of moving parts.”

At the Laker practice facility in El Segundo, the administration offices open to a hallway lined with windows overlooking the basketball court below. Lester remembers many days sitting in his office — both early in the morning or late at night when suddenly he would hear a basketball bouncing.

“It was unusual at those hours, so I’d always take a peek to see who was on the court. Invariably, it would be Kobe. All alone, working on his game.”

Though Lester will tell you he was just doing his job, Laker fans might disagree. They owe a debt of gratitude to Lester for convincing West to take a look at the skinny high school kid from Philly and igniting one of the most astute draft maneuvers and lopsided trades in NBA history.

Jon Darsee, a regular Register contributor, was a member of the University of Iowa 1980 Final Four team and a three-year basketball letterman. He now serves as chief innovation officer at the UI.