Brown: Minus White, Iowa leaves Purdue with silver lining, but no win

There was no crashing and burning after adversity, but it's a hollow feeling anyway for the Hawkeyes.

Brown: Minus White, Iowa leaves Purdue with silver lining, but no win

The Iowa coach also was proud of the Hawkeye effort to rally at Purdue. 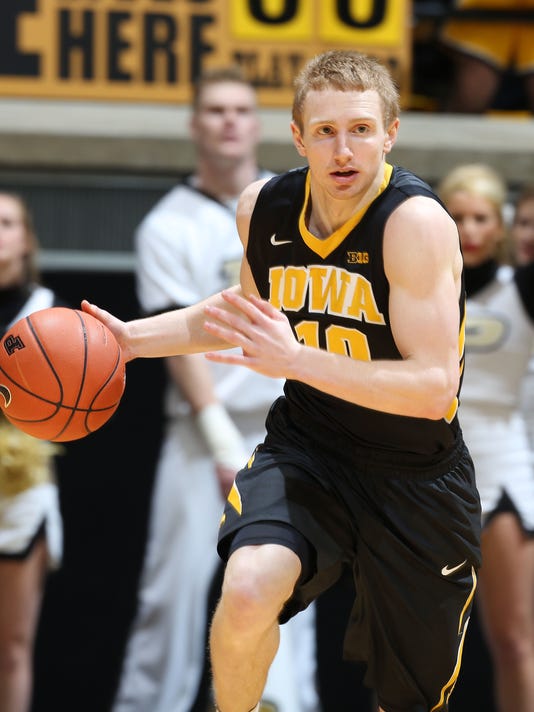 Iowa guard Mike Gesell committed no turnovers, scored 15 points on 6-for-8 shooting and had two assists in the second half. He scored Iowa’s last 12 points, but the Hawkeyes fell 67-63 at Purdue on Saturday.(Photo: Brian Spurlock/USA TODAY Sports)

WEST LAFAYTETTE, Ind. – This Iowa basketball team has shown a tendency to crash and burn in the face of adversity all season. And it looked like more was in store Saturday at Mackey Arena.

The good news is, that didn't happen. The bad news is that the reward was not a third Big Ten road victory, only a hard-to-swallow sign of progress after Purdue rallied in the final minute for a 67-63 triumph.

The Hawkeyes will be one-and-done in The Associated Press' poll after their second loss of the week.

When Iowa's leading scorer and rebounder, Aaron White, went down with a shoulder injury less than 5 minutes into Saturday's game, the Hawkeyes veered sideways: careless passes, a lack of hustle, silly turnovers, little defense and poor execution on offense.

A repeat of second-half crash-and-burns against Texas, Iowa State, Northern Iowa and Michigan State, not to mention the entire 40 minutes of Tuesday's 32-point loss at Wisconsin, appeared imminent.

Purdue went up by a dozen and had a 10-point lead at the break. It was the Boilermakers' first halftime lead of the Big Ten season.

That's when Iowa coach Fran McCaffery went up to point guard Mike Gesell and told him he needed the junior to be a leader. Gesell, who had missed five of six field-goal attempts and had three turnovers the first half, responded.

No turnovers, 15 points on 6-for-8 shooting and two assists later, Gesell had Iowa on the cusp of victory. He scored the Hawkeyes' final 12 points in the final 7 minutes, including a jumper that gave his team a 63-62 lead with 1:18 to play. Gesell made a killing off the dribble, taking advantage of foul trouble by Purdue's post players to get to the rim.

"Those last 5 minutes, he was unbelievable," teammate Adam Woodbury said. "Making plays, getting to the hoop for and-ones. I know what he's capable of. Some people doubt him sometimes. That's unfair. Because he runs our team pretty damn well."

The Hawkeyes had no turnovers in the second half, and finished with a whopping 46-31 rebounding advantage. Iowa's Gabe Olaseni had a career-high 16 rebounds. His 11 offensive boards outnumbered the entire Purdue team by two.

That was just one of a series of crazy numbers that decided this game. Iowa made just four of 17 3-point attempts. Jarrod Uthoff, Iowa's second-leading scorer, was two-of-14 from the field and missed all five 3s he took.

Purdue Boilermakers center Isaac Haas (44) is congratulated by a fan as he walks off the floor after the game against the Iowa Hawkeyes at Mackey Arena. Purdue defeats Iowa 67-63. Brian Spurlock-USA TODAY Sports
Fullscreen

The Purdue Boilermakers fans wave during the game against the Iowa Hawkeyes at Mackey Arena. The Boilermakers won 67- 63. Brian Spurlock-USA TODAY Sports
Fullscreen

Purdue Boilermakers coach Matt Painter (L) talks to his team during a time out against the Iowa Hawkeyes at Mackey Arena. The Boilermakers won 67- 63. Brian Spurlock-USA TODAY Sports
Fullscreen

Iowa, second in the Big Ten in free-throw shooting at 75 percent, was just 17-for-26. Purdue made just four of 20 3-pointers. And the Boilermakers' leading scorer, Kendall Stephens, playing with a broken pinkie finger on his shooting hand, missed all four shot attempts.

This one came down to Rapheal Davis, who had made four of 21 3-pointers all season. He made three in five tries Saturday. The last one was deep, with his team down a point, 44 seconds to play and the shot clock about to expire.

"Honestly, you've got to live with that one," Gesell said.

And a big road victory turned into a silver lining instead.