Brown: Dale Howard will always be coach to me

Rick Brown remembers Dale Howard, who passed away at the age of 81 Friday night

Brown: Dale Howard will always be coach to me 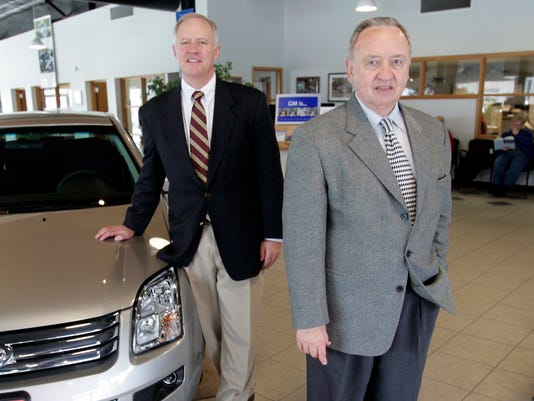 Dale Howard, right, and his son, Steve, seen here in 2007. Dale passed away at the age of 81 Friday night.(Photo: Doug Wells/Special to the Register)

IOWA CITY, Ia. – My youth is served every time I enter Carver-Hawkeye Arena through the main entrance.

Steve Howard and I became close friends when his family moved to Fort Dodge in the late 1960s. Steve's dad, Dale, was the men's basketball coach at Iowa Central Community College in Fort Dodge. Watching those teams play was can't-miss entertainment for a high school kid. I can still picture Tony Styles hooking his defender and making his patented baseline move.

Dale got out of coaching in 1973, and went on to build a business empire in Iowa Falls. He passed away Friday night at 81 years of age after taking cancer to overtime.

Dale and his wife, Marilyn, shared their wealth with many. That included his alma mater, the University of Iowa. In 2008, the Howards kicked off fundraising for renovations to Carver-Hawkeye Arena with a $3.5 million gift.

The money went to what is now called the Dale and Marilyn Howard Family Pavilion, a four-story, 75,000-square-foot addition dedicated in September of 2011. The addition includes two practice courts, new offices, locker rooms and training facilities.

You'll see the Howards' name on the wall outside the arena's main entrance. Just a name to many, but a fond memory for me. Dale never lost his love for basketball after he left coaching, and he continued to make friends with those in his old profession.

Iowa coach Fran McCaffery opened his news conference after Saturday's loss to No. 5 Wisconsin by talking about Dale.

"In the time I've been here we became very close friends," McCaffery said. "We would not have our practice facility, our office complex, the Carver-Hawkeye renovation, without the generosity of he and his wife Marilyn. Great husband, great father, great basketball man, and we're going to miss him."

Northern Iowa players wore black ribbons with the initials D.H. on their uniforms during Saturday's electric 70-54 victory over No. 12 Wichita State at the McLeod Center. After making funeral arrangements for his dad, Steve Howard and other members of the family made it to Cedar Falls for the second half.

Afterwards, Northern Iowa coach Ben Jacobson asked Steve to talk to the team. The Panthers' Seth Tuttle, who had just scored a career-high 29 points in the victory, took the black patch off his uniform and presented it to Steve.

Visitation for Dale Howard will be Wednesday from 4 to 7 p.m. at the Hamilton Auditorium on the campus of Ellsworth Community College in Iowa Falls. His funeral will be at 10:30 a.m. Thursday at First United Methodist Church. In lieu of flowers, the Howards ask that donations be made to the church or Coaches vs. Cancer (American Cancer Society).

The last time I saw Dale was in early November, at a Coaches vs. Cancer event hosted by Fran and Margaret McCaffery. The event was held in the Dale and Marilyn Howard Pavilion, a testament to his business brilliance. But he'll always be coach to me.