Wisconsin is on the doorstep of the Big Ten men's basketball championship. The rest of the league? Not so predictable.

Iowa's Peter Jok, left, and Gabriel Olaseni, right, smile on the bench in the closing minutes of the second half of the NCAA game against Nebraska in Lincoln, Neb. on Sunday, Feb. 22, 2015. Iowa won 74-46. Nati Harnik, AP
Fullscreen

Hawkeyes guard Mike Gesell (10) cheers during the final moments of the game against the Nebraska Cornhuskers in the second half at Pinnacle Bank Arena. Iowa won 74-46. Bruce Thorson-USA TODAY Sports
Fullscreen

Hawkeyes center Gabriel Olaseni (0) wipes his face during the game against the Nebraska Cornhuskers in the second half at Pinnacle Bank Arena. Iowa won 74-46. Bruce Thorson-USA TODAY Sports
Fullscreen 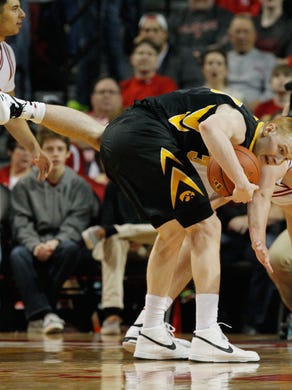 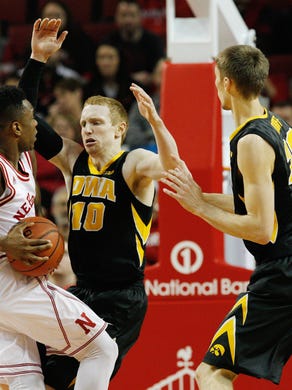 An Iowa Hawkeyes trainer looks at guard Peter Jok's (3) eye during the game against the Nebraska Cornhuskers in the first half at Pinnacle Bank Arena. Iowa won 74-46. Bruce Thorson-USA TODAY Sports
Fullscreen 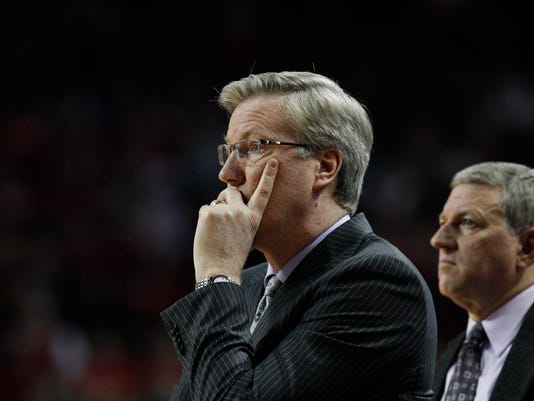 “When it’s all said and done, the reason that (Nebraska) game ended the way it did was more because of our defense than our offense,” Iowa coach Fran McCaffery said.(Photo: Bruce Thorson/USA TODAY Sports)

Wisconsin is on the doorstep of the Big Ten men's basketball championship everyone expected it to win before the season started. The rest of the league? Not so predictable.

The Badgers (13-1) have a three-game lead over Maryland, Michigan State and the season's biggest surprise, Purdue. With two weeks remaining in the regular season, there are your likely top four seeds for the Big Ten Tournament at the United Center in Chicago.

Five more teams — Indiana (9-6), Ohio State (8-6), Iowa (8-6), Illinois (7-7) and Michigan (7-8) — could end up between the fifth seed and the ninth seed in Chicago. Things could change quickly between now and the trip to the Windy City. The seeding shuffle also has NCAA Tournament implications.

No team represents the unpredictability as much as the Hawkeyes. Coach Fran McCaffery's team has won a league game by 34 points and lost another one by 32. Iowa has won five Big Ten games by 11 points or more and lost two by 14 points or more.

"I think everyone overanalyzes stuff like that," McCaffery said. "The one thing I always say, and you probably think I'm just saying it, is I'm respectful of the teams that beat us. You lose two games and everyone is like, 'It's two bad losses.' "

Losses at home to Minnesota on Feb. 12 and at Northwestern three days later in overtime, snapping the Wildcats' 10-game losing streak, felt like bad losses at the time. The Wildcats went on to win at Minnesota and destroy Penn State, so that one doesn't look quite so bad.

Iowa rebounded last week with a 34-point victory at home against Rutgers Thursday and a 28-point victory at Nebraska on Sunday. The Cornhuskers, in their second season at Pinnacle Bank Arena, entered the game with a 25-5 record in their new home. Those five losses had been by a total of 27 points.

Iowa shot 50 percent from the field, the first Nebraska opponent to make at least half of its shots in 38 games. Defensively, the Hawkeyes were active and engaged. It was the kind of defense that was missing down the stretch against Minnesota, and at the start of the Northwestern game when Iowa trailed by 10 points early on.

"When it's all said and done, the reason that (Nebraska) game ended the way it did was more because of our defense than our offense," McCaffery said.

Last week marked the first time Iowa has held a Big Ten opponent under 50 points in back-to-back games since the 2005-06 season, when Penn State had 38 and Wisconsin 44 in the final two regular-season games. It had happened just twice over the previous five seasons.

Illinois, a team that has shooters and guards who can get to the rim on the bounce, will challenge Iowa's born-again defense. Beating the Illini would break this recent trend of good Hawkeyes/bad Hawkeyes, and move McCaffery's team a big step closer to the NCAA Tournament.