Why ask why? Iowa's Uthoff has become go-to guy

Uthoff would rather let his actions speak for him on the court, but he's not afraid to argue his point in class.

Why ask why? Iowa's Uthoff has become go-to guy 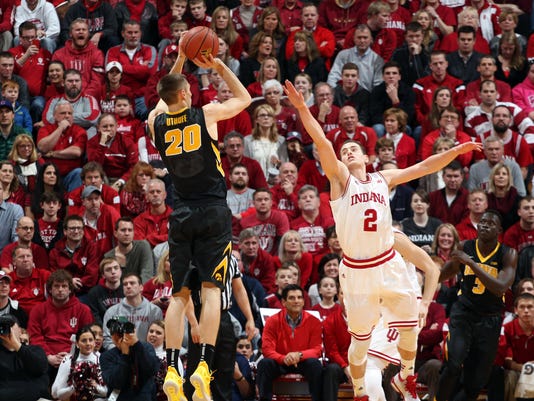 IOWA CITY, Ia. – I listened in disbelief as my daughter's boyfriend told a story about Jarrod Uthoff and the economics class they shared last year at the University of Iowa.

"If you get a topic I'm interested in, I actually start talking," Uthoff said. "If I'm not really interested, I just sit back and observe."

In other words, I told Uthoff, you don't find media types very interesting.

"That's a good one," he said, punctuating his comment with a laugh that filled the room. "I didn't see that one coming." 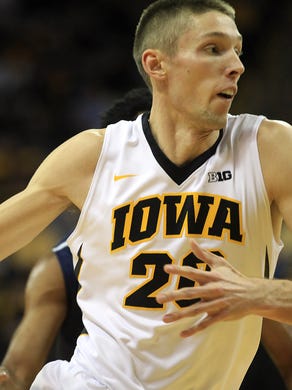 Iowa senior forward Jarrod Uthoff was one of the nation's finalists for the Oscar Robertson Trophy, awarded to the top player in college basketball. Mark Marturello/The Register
Fullscreen

Iowa's Jarrod Uthoff goes up for a shot during the Hawkeyes' game against Rutgers at Carver-Hawkeye Arena on Thursday, Feb. 19, 2015. David Scrivner / Iowa City Press-Citizen
Fullscreen

Iowa's Jarrod Uthoff (20) looks to dribble around Northwood's Malte Ziegenhagen (4) during the first half of play at Carver-Hawkeye Arena on Sunday, November 2, 2014. Justin Torner/For the Iowa City Press-Citizen
Fullscreen

Iowa's Peter Jok (3) and Jarrod Uthoff (20) vie for a loose ball with Maryland's Jake Layman (10) during the first half of play during the 71-55 Hawkeye win over the Terrapins at Carver-Hawkeye Arena in Iowa City on Sunday, February 8, 2015 Justin Torner/For the Iowa City Press-Citizen
Fullscreen

Iowa's Jarrod Uthoff (20) puts up a layup versus Northwestern during senior day in the first half at Carver-Hawkeye Arena in Iowa City on Saturday, March 7, 2015. Justin Torner/For the Iowa City Press-Citizen
Fullscreen 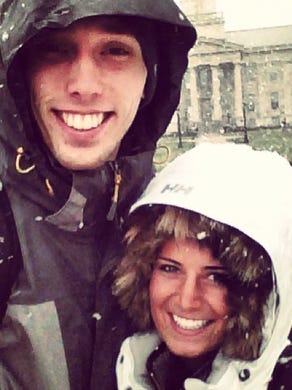 Jarrod Uthoff and his fiancee, Jessie Jordan, at the UI pentacrest. They first met in the fall of 2011. Special to the Register/Jessie Jordan
Fullscreen

Dale Uthoff Jr., left, and Jarrod, right, went out one summer night on the Iowa River and caught a 50-pound flathead catfish, well after their parents were asleep. But of course they had to break the news – so there was mud-covered Dale Jr. with a giant fish draped over his shoulder and young Jarrod, grinning ear to ear. “Their eyes got as big as saucers,” Dale Jr. says. Special to the Register, The Uthoff family
Fullscreen 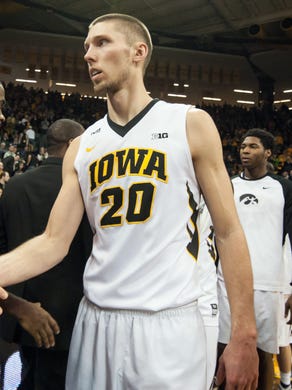 Jarrod Uthoff launched himself into national player of the year conversations after he and the Hawkeyes' torrid start to the 2015-16 season. Jeffrey Becker, USA TODAY Sports
Fullscreen 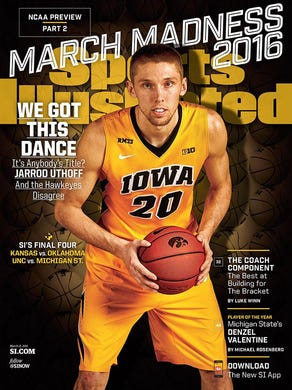 Iowa Hawkeyes guard Anthony Clemmons (5) and forward Jarrod Uthoff (20) walk back the the bench during a time out in the second half against the Michigan Wolverines at Crisler Center. Rick Osentoski/USA TODAY Sports
Fullscreen

Jarrod Uthoff launched himself into national player of the year conversations after he and the Hawkeyes' torrid start to the 2015-16 season. Jeffrey Becker, USA TODAY Sports
Fullscreen

Uthoff would rather let his actions speak for him on the court. He's the No. 2 scorer and rebounder and leading shot-blocker on a Hawkeye team that takes a 21-10 record and a six-game winning streak into Thursday's Big Ten Tournament opener at the United Center in Chicago.

An economics major, Uthoff will graduate in May. Then he'll start working toward a graduate degree — likely in sports management — next year. His most interesting class this semester?

"Any class I can argue in would be a class that I'm interested in," Uthoff said. "I love to argue. I'm always asking why. That's been my personality since I was a little kid. Ask me to do something, or tell me the way something is, and I'm going to ask why."

Uthoff's free-spirit personality is refreshing in the cookie-cutter, cliche-rich world of college sports. His car has vanity plates that read "SLMDUNK," a gift from his sister when he was a junior at Cedar Rapids Jefferson. But he doesn't watch college basketball on television. Truth is, he doesn't even have cable TV.

"I'm too busy to pay all that money to watch it once a week," said Uthoff, an avid outdoorsman. "I'm too cheap."

But he can hoop. Following back-to-back redshirt seasons — one at Wisconsin, the other at Iowa after transferring — Uthoff's college career off to a mediocre start last season. He averaged 18.2 minutes, 7.6 points and 4.6 rebounds a game off the bench. But he's started all 31 games this season, averaging 30.1 minutes, 12.2 points and 6.3 rebounds while blocking a team-high 51 shots.

Uthoff survived the ups and downs by staying on an even keel, a trait that serves him as well as his quizzical thirst for knowledge.

"He's always been the even-keeled kid that he is now," said Jerry Ask of Cedar Rapids, Uthoff's AAU coach for four seasons starting in 4th grade. "Whether he's playing good or bad, whether he's getting praised or yelled at, he never changes expressions. A very polite kid. No hot dog in him. He always had a motor and he never seemed to get tired."

The youngest of five children, Jarrod was always tall and athletic for his age.

"When he got in third or fourth grade, and he was big enough to handle the ball and shoot properly, that's when we got him playing basketball," said Dale Uthoff, Jarrod's older brother. "He was more natural playing baseball. But we all knew he had the physical capabilities to be a really good basketball player."

Dale, 12 years older than Jarrod, graduated from Drake and had a job lined up that started a few months later. So he spent a summer taking Jarrod to basketball camps. He also bought him a Goalsetter hoop that went up in the driveway of the family's home in Marengo.

"I was pretty pumped about it," Jarrod said. "I was always out there."

At the end of the summer, Dale saw an ad in the Cedar Rapids Gazette. Ask was looking for a player to join his Cedar Rapids Tornadoes fourth-grade AAU team.

So they made the 30-mile drive to Cedar Rapids to attend a tryout, conducted in Ask's driveway. Jarrod made the team. The Tornadoes played for the State AAU 4th-grade title, losing to a Salvation Army team that included Uthoff's Iowa teammate, Josh Oglesby, and Northern Iowa's Matt Bohannon.

What's in store for the red-hot Hawkeyes in the Big Ten Tournament?

Four years. A lot of practices, a lot of games. And a lot of trips from Marengo to Cedar Rapids.

"His parents (Dale and Diane) invested a lot of time and a lot of gas money to get him to everything," Ask said. "They never missed."

Uthoff's AAU teammates were all in the Cedar Rapids Jefferson school district. So Jarrod moved in with his sister, Erika, in Cedar Rapids and joined them. He went on to become Iowa's Mr. Basketball in 2011, selecting Wisconsin over multiple Division I offers.

He redshirted his first season with the Badgers, but it never felt like home. Uthoff transferred to Iowa, sat out another year and then slowly shook the rust off his game. This season, he's made the most of his extended minutes.

"That was always my goal, to play Division I basketball," Uthoff said. "My other goal was to play in the NBA. I thought that was a long shot. Now it's neat that I'm here (at Iowa). And the next goal is achievable."