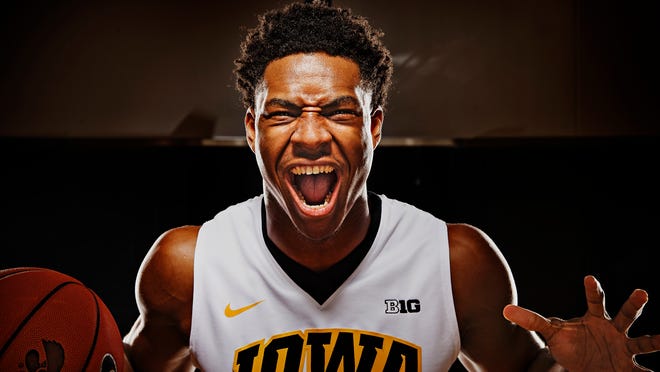 IOWA CITY, Ia. — Adam Woodbury was a big catch for Iowa basketball coach Fran McCaffery, a top-100 recruit who said no to North Carolina and took a chance on the home-state program trying to find its way again.

When Woodbury arrived for his freshman season in the fall of 2012, senior Eric May pulled the 7-footer aside.

“He said, “This time goes by really fast,’ ” Woodbury said. “I said, “Yeah, you’re an old guy now, you don’t know what you’re talking about.’ But he knew what he was talking about. These years go by so fast.”

Woodbury is now a senior. Can that really be possible? True story.

Woodbury, Mike Gesell and Anthony Clemmons arrived with promise. They will leave with results.

“They stood up and said, “We’re going to make a difference,’ ” McCaffery said at the Hawkeyes’ annual media day Wednesday at Carver-Hawkeye Arena. “That takes courage and that takes confidence.”

So here we are, three-fourths of a career over, a senior swan song to go. With this trio in uniform, Iowa has run off three straight 20-win seasons, made back-to-back trips to the NCAA Tournament and recorded the school’s first victory in the Big Dance since 2001.

And instead of getting advice from underclassmen, they’re passing it on. McCaffery enters his sixth season at Iowa with an eclectic roster. It’s loaded with experience at the top and packed with potential in a six-player recruiting class at the bottom.

“I’ve got to figure that sometime in 30-plus years I’ve had something like this,” McCaffery said. “But I don’t remember.”

“Extremely athletic,” Gesell said. “Guys who fit perfect in Fran’s system, guys that can run, block shots and play multiple positions. Guys who can score, too. I think it will be a very special class.”

If youth and experience mesh, this could be a real good team. An NCAA team. But this journey will get out of the blocks with four returning starters and five guys who have starting experience.

Woodbury has started 104 of 105 games at Iowa. Gesell has started 97 of 101, and Clemmons 25 of 104. There’s also a fourth senior, Jarrod Uthoff, who transferred in from Wisconsin and looks to be Iowa’s go-to guy like Aaron White and Devyn Marble before him.

And don’t sleep on junior Peter Jok, who started 21 games last season and is, in my book, poised for a breakout season. You read it here first.

Dom Uhl, a sophomore, also got a taste last season and needs to play some quality minutes for this team to succeed. But there will be minutes for the new faces, too. That includes walk-on forward Nicholas Baer and redshirt freshman shooting guard Brady Ellingson.

“I’m confident in my skill set, and my teammates,” Fleming said. “The guys really mesh well together. I think we can pick up the load and keep it going in a bigger and better direction.”

“Our guys that were here did a great job of recruiting them, mentoring them and welcoming them,” McCaffery said. “All three were in the starting lineup. Sometimes, that stuff doesn’t go well in the locker room. But it was never an issue.”

Starting minutes aren’t as readily available now as they were in 2012-13. But new and old will have to play as one for this playing rotation, likely at least 10 bodies deep, to work.

“It’s not just about this year, it’s about the future,” Gesell said. “We want this program to succeed. Obviously, it’s this year first. At the same time, it’s our job to bring the freshmen along and teach them as much as we can so that next year they can continue to have success.”

And that is an admirable legacy to leave, beyond wins and losses.

Embrace the moment, kiddos, because time flies by.

“That’s something they keep telling us,” Wagner said.