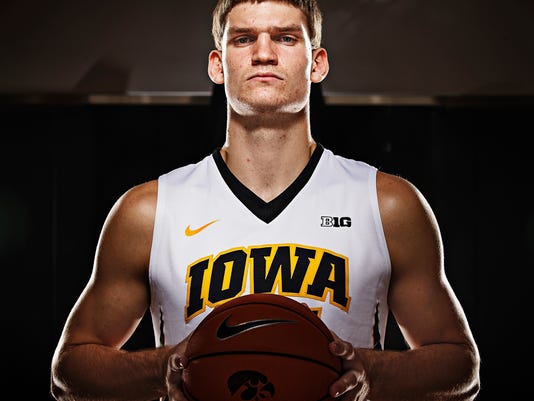 CHICAGO — The questions came, even though Adam Woodbury hoped they wouldn't.

"It's ancient history," Iowa's senior center said as he waited to be interviewed at Big Ten basketball media day Thursday. "I'm tired of answering those questions."

But I expected them to come, and I wasn't disappointed. Questions about two eye-poking incidents — yes, they were accidental — involving Woodbury in games at Wisconsin Jan. 20 and at home against Maryland Feb. 8.

Woodbury found himself in the eye of the storm after they happened. So did McCaffery after staunchly defending his player. Eight months later, it was still the elephant in the ballroom at the O'Hare Marriott.

"I would certainly hope it wouldn't linger," McCaffery said Thursday. "You're talking about a guy who has played a long time, and he's as good a person as I've ever coached. He'd never try to intentionally hurt anybody. I took great exception to people who attacked him last year because I know him. I know his family. I think it was unfair."

But the questions did come. One media type asked Woodbury what the over-under in Las Vegas would be on eye-pokes this season. I can tell you this: Woodbury doesn't care what you think about him, whether it's an eye-poking incident or questions about whether he can dunk or not. When you stand 7 feet 1 inches tall, you're always going to bring attention to yourself.

"I can't really put too much stock in what they think of me," Woodbury said. "It's what my teammates think of me, who my family thinks I am and how I present myself. That's all I can put stock in."

Instead of eye-pokes, the real emphasis should be on what Woodbury can accomplish in his senior season when he'll see extended playing time, foul trouble be damned.

McCaffery expects 34 or 35 minutes a game out of his four-year starter, who averaged 20.5 last season.

"Any time the coach asks you to do more than you did last year, it's got to be a real confidence boost," Woodbury said.

"Last year, it was all about getting other guys open and rebounding," Woodbury said. "This year, there will be a little more scoring and rebounding."

"It's just me getting smarter in some areas," Woodbury said. "I can't gamble as much because we don't have the backups we did last year."

Woodbury's safety net was Gabe Olaseni, who averaged 18.6 minutes, 8.1 points and 4.8 rebounds off the bench. He's not around now.

"This year is going to be a little different," Woodbury said. "I've got to pick and choose my spots more carefully. I'll have to know when to give up that easy basket to maybe stay in the game 5 or 10 minutes longer."

McCaffery has said that it will be backup center by committee this season, with sophomore Dominique Uhl first in line. But keeping Woodbury out of foul trouble is paramount.

"You've got to move your feet, and you've got to keep your hands out," McCaffery said. "That will keep you out of foul trouble. And he knows that."

Woodbury has helped put the bite back in Iowa basketball his first three seasons.

"We've done a lot of cool things," Woodbury said. "And we're looking to finish on a high note."

And that would be a great to be remembered. Even when it becomes ancient history.