Notebook: Bluder on playing by quarters; Disterhoft ahead of schedule

Iowa women's basketball coach Lisa Bluder didn't feel the need for a rule change to produce points, and the longtime Iowa coach had the statistics to prove it.

Notebook: Bluder on playing by quarters; Disterhoft ahead of schedule 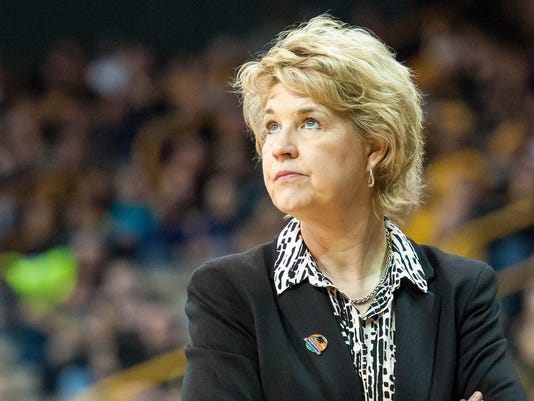 Earlier this month, the NCAA rolled out a fresh format and a new set of rules designed to increase scoring in women's basketball.

Lisa Bluder didn't feel the need for a rule change to produce points, and the longtime Iowa coach had the statistics to prove it.

Iowa broke the school record for scoring average each of the last two seasons posting 79.5 points per game last season under Bluder.

Now, the NCAA Playing Rules Oversight Panel has approved a new format that is supposed to allow for even more scoring.

The NCAA announced format changes that includes the switch to four, 10-minute quarters rather than two, 20-minute halves.

"What I understand is the motive is less stoppages of play, more offense and I think everyone wants that, but we averaged almost 80 points a game so I don't know that we needed to have that," Bluder said. "Regardless we are going to have to adapt to it and get used to it."

The switch to quarters is designed to enhance the flow of the game by decreasing the number of stoppages, including the amount of media timeouts.

Under the new rules, teams will enter the bonus and shoot two free throws on the fifth team foul in each quarter rather than shooting a one-and-one on the seventh team foul of each half and entering the double bonus on 10 team fouls.

Bluder saw the now obsolete one-and-one as a bonus for her team that shot .757 from the free-throw line last season.

"With our team having a one-and-one was a benefit because we were a good free-throw shooting team," Bluder said. "I think one-and-ones rewards better shooting teams. To me I kind of like the one-and-one."

The other rule changes include advancing the ball to the front court following a timeout in the final minute of the fourth quarter and any overtimes.

"I always feel sometimes that people are put on rules committees and they feel like they have to do something to be effective," Bluder said. "I didn't feel like our game was broken."

• AHEAD OF SCHEDULE: Junior Ally Disterhoft is ahead of schedule in her rehab following postseason wrist surgery.

According to Bluder, the surgery went well and Disterhoft has been cleared for 10 minutes of ball handling or shooting per day.

Original prognosis didn't have Disterhoft, who will miss all of this summer's Game Time League, cleared for that type of activity until August.

"The surgery went well, it's a good thing it was done and she should have no more issues with it," Bluder said. "They are expecting a full and complete recovery.

The group of newcomers will compete in the Game Time League this summer with Gustafson and Davis paired together on the Beat the Bookstore/Westport Touchless Autowash team.

Peschel, who was voted a team captain for the upcoming season along with Disterhoft, is spending six months studying in Spain this summer.

"We miss Kali because Ally and Kali were voted captains so you have two captains that are really not able to scrimmage with the team or be a part of game time which is really not the best scenario," Bluder said. "I think we have enough senior leadership with Claire and Nicole that we are able to handle things."