The Iowa women host No. 8 Maryland on Sunday 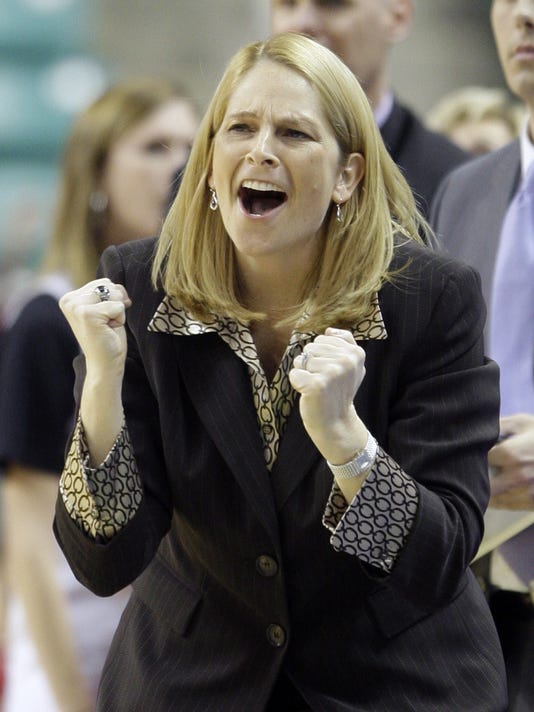 Maryland coach Brenda Frese reacts to a call in the second half of their 66-64 loss to Duke in an NCAA college basketball game in the Atlantic Coast Conference tournament in Greensboro, N.C., Friday, March 5, 2010. (AP Photo/Chuck Burton)(Photo: ASSOCIATED PRESS)

Much was made about the challenging start to Big Ten play facing the Iowa women’s basketball team.

The Hawkeyes have proved so far that they were up to that challenge.

Iowa went 2-1 to open a difficult stretch, winning a pair of games over NCAA Tournament teams from a season ago.

The Hawkeyes’ biggest test in a four-game, 11-day slate, and of the season, comes Sunday when Iowa (12-3, 2-1 Big Ten) puts its 25-game winning streak at Carver-Hawkeye Arena on the line against defending Big Ten champion and eighth-ranked Maryland (13-2, 2-1) at 2 p.m.

It’s a test the Hawkeyes are looking forward to.

“Maryland has the tradition, they have been in the last two Final Fours, they have incredible horses, they have all-Americans on their team, but you know we are excited about this,” Iowa coach Lisa Bluder said.

Over the last few seasons Maryland has established itself as one of the top programs in the country.

Led by Cedar Rapids native Brenda Frese, Maryland is 75-12 over the past three seasons and has advanced to the Final Four two years in a row.

Maryland went 18-0 on its way to the Big Ten title a season ago, including a 93-88 win over Iowa in College Park.

The Terrapins dropped their first Big Ten Conference game since joining the league last Saturday, 80-71, to Ohio State, but rebounded with an emphatic 89-50 win over Nebraska on Thursday.

“It’s exciting to have a top team in the country come in to your home court,” Bluder said. “You have all the added elements of Brenda Frese being from Cedar Rapids playing into this.”

Meanwhile, Iowa will be attempting to bounce back from its first conference loss of the season, an 82-75 loss at Michigan in which the Hawkeyes held a 17-point lead.

Iowa has gone 22 games since it lost back-to-back games, a stretch that dates back to last season.

The Hawkeyes last lost back-to-back games on Feb. 21 of 2015, and have had consecutive losses just twice in the last three seasons.

“We try to take it one game at a time,” Iowa sophomore Whitney Jennings said. “Then once you are done turn the page to the next scouting report and go from there.”

For Iowa to avoid back-to-back losses it will need a strong effort on both ends of the court against one of the top offensive teams in the country.

Three Terrapins average more than 14 points led by Shatori Walker-Kimbrough, who is averaging a team-high 17.7 per game.

Three other players average between 7.4 and 8.3 points on a Maryland team that leads the conference in field-goal percentage (51 percent) and assists (20.3).

Maryland has been almost as good defensively this season, holding opponents to 54.5 points per game (second in the conference) while limiting teams to a Big Ten-best 33 percent field-goal shooting.

“We are excited for this game,” Iowa's Ally Disterhoft said. “It’s going to be a good matchup and we are excited to get back out there on the floor and keep improving like we know that we can.”

What to watch: Maryland has been dominant since joining the Big Ten last season, going 20-1 in regular-season conference games, and had a 19-game Big Ten winning streak snapped with a home loss to Ohio State last week.

Iowa junior Ally Disterhoft has scored in double figures in every game this season and had a team-high 22 points in Iowa’s only meeting with Maryland last season.