Notebook: Hawkeyes get back to 'Iowa basketball'

Notebook: Hawkeyes get back to 'Iowa basketball' 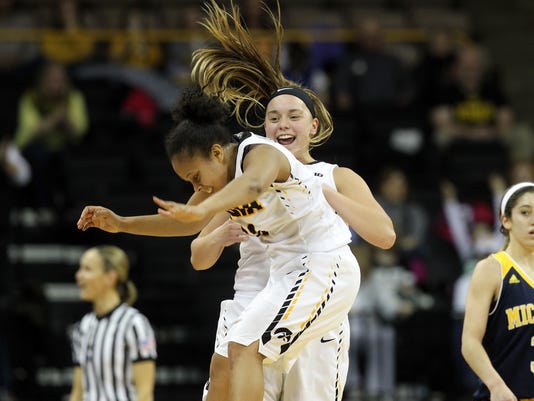 Iowa's Tania Davis and Alexa Kastanek celebrate as they head into a timeout during the Hawkeyes' game against Michigan at Carver-Hawkeye Arena on Thursday, Jan. 28, 2016.(Photo: David Scrivner / Iowa City Press-Citizen)Buy Photo

When Iowa is sharing the ball, scoring points and getting contributions from multiple players, Lisa Bluder simply calls the style "Iowa basketball."

Over the last few weeks, Bluder hasn’t gotten to use that phrase very often.

On Thursday, Iowa basketball was back.

Iowa had four players in double figures. The Hawkeyes scored more than 80 points for the first time in Big Ten play Thursday, snapping a three-game losing skid with an 85-69 win over Michigan.

For the first time since its 2-0 Big Ten start, Thursday night looked like the Iowa basketball that helped the Hawkeyes start the season 12-2.

Iowa had 21 assists Thursday, its highest total in a Big Ten game this season, and committed just 12 turnovers while notching its highest point total since scoring 89 in a Dec. 22 win over Drake.

The 12 turnovers matched the lowest total during Big Ten play and marked just the second time in the last seven games that the Hawkeyes had four players score in double figures.

“Absolutely,” Bluder said when asked if Thursday’s performance was more "Iowa basketball." “Twenty-one assists, 12 turnovers, I love that, our bench outscores their bench tremendously, four players in double figures so good balance there. All good stuff.”

Tania Davis getting comfortable for Hawkeyes

The Hawkeyes also shot 84 percent from the free-throw line, outscoring Michigan 26-9 at the charity stripes.

All of those statistics are staples in Iowa’s usual high-scoring attack.

Bluder hopes Thursday’s more Iowa-like performance gets her team back to play the way she expects over the final half of the Big Ten season.

“It’s one game, I understand that, and we are going one game at a time, but hopefully this will get us going down the right path for these last nine games,” Bluder said.

With everyone but Michigan State and Maryland nine games through the Big Ten slate half of the teams in the league have a winning record.

Iowa, which is in eighth place, has six of its final nine games against teams that hit the halfway point above .500.

Bluder believes her young team, which had five freshmen or sophomores play more than 20 minutes on Thursday, is peaking at the right time.

“Our freshmen are growing up, our sophomores are getting more and more experience and that is helpful at this time of year,” Bluder said. “They aren’t babies anymore. So that’s nice.”

GOING BIG: Megan Gustafson and Chase Coley were not in the starting lineup together on Thursday like they were Sunday at Purdue.

The duo still saw plenty of time on the court together and continued to impress.

Coley came off the bench for the first time this season and notched her third career double-double with 21 points and 10 rebounds.

Gustafson had her first career double-double with 10 points and 12 rebounds as Iowa continued to experiment with Coley playing a forward spot with Gustafson in the post.

Coley said she is getting more comfortable in that spot, which allows her to face the basket more, and she had three assists and just one turnover against Michigan.

“I like it a lot,” Coley said of playing the "4" spot. "I like the short shots and facing up more. I love pulling the big girl out and looking for my teammates inside. I love getting the ball to Megan in the post when she’s in there.”

LOCKING DOWN LATE: Tania Davis will get plenty of praise for her career-high 18 points on Thursday, but it was the freshman’s defense that had Bluder raving.

Flaherty, who ranks 10th in the nation in scoring at 22.2 points per game, finished with 31 on Thursday, but had just seven points over the final 25 minutes.

“She is a heck of a player, that girl can shoot the ball,” Bluder said of Flaherty. “She had 24 points in the first 15 minutes and we really challenged Tania to face guard her and try to keep the ball out of her hands and then she scores seven in the last 25 minutes, so I thought Tania did an exceptional job of defending a key player for them.”