Iowa hosts No. 6 Ohio State on Thursday in need of a signature win. 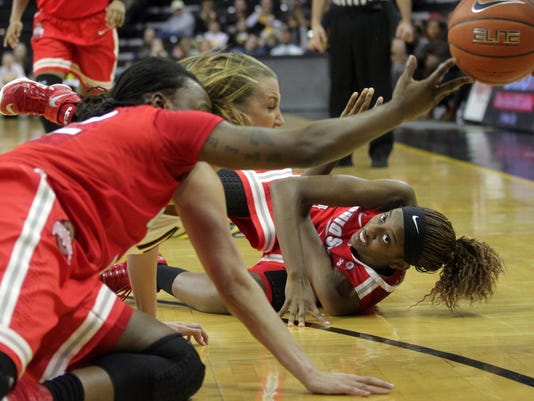 Coming off another tough loss and with its streak of NCAA tournament appearances in jeopardy, Iowa coach Lisa Bluder decided to start building for the future.

No, Bluder isn’t throwing in the towel on this season.

In fact, it’s just the opposite.

Following a 74-69 loss to Michigan State on Sunday, the message from Bluder was to build on the positives from the loss to help in the future.

As in the immediate future. Specifically, the final six games of the Big Ten regular season. That stretch begins with Thursday’s 7:30 meeting with sixth-ranked Ohio State at Carver-Hawkeye Arena.

“I think you have to build for the future, and when I say 'future,' I don’t mean next year. I mean these next six games,” Bluder explained. “We are getting better, we are getting better. And that is to be expected with a young team.”

In order for Iowa (15-9, 5-7) to run its Big Ten-best string of NCAA tournament appearances to nine straight, a strong finish is a virtual must.

Iowa will try to snap a two-game losing skid with a statement victory Thursday against the league leaders.

Bluder is reminding her young team of the what they did well in Sunday's loss to the 14th-ranked Spartans.

“We were right there. We were one point down with 30 seconds to go against the No. 14 team in the country, so I think we need to remember that and build on that and try to make some noise in these last six games,” Bluder said. “We know it’s going to be a tough challenge against Ohio State on Thursday night.”

Ohio State (19-4, 11-1) comes to Iowa City one of the hottest teams in the country and alone atop Big Ten standings after a 94-86 win over Maryland on Monday.

Ohio State has won 15 of its last 16 games and seven straight since its only Big Ten loss of the season at Northwestern.

The electric Mitchell accounts for nearly 30 percent of that scoring production herself. She averages 25.1 points per game, which ranks fourth nationally and second in the Big Ten.

“She is fun to watch,” Bluder said of Mitchell. “She is an amazing player. She can shoot the 3 so easily and also get to the rim. She is just an excellent player.”

Mitchell is far from a one-person show.

Three other players average double digits for the Buckeyes, led by senior Ameryst Alston who averages 18.6 points per game.

Shayla Cooper is averaging 13.1 points and Alexa Hart 11.8 per game.

“They just have a lot of offensive weapons,” Iowa sophomore Whitney Jennings said. “It just makes it extremely hard for opponents to guard them.”

For teams defending the Buckeyes, it is a matter of picking your poison.

Although defending Mitchell and Alston are the top priorities, the 6-foot-3 Hart is third nationally in field goal percentage at 66 percent.

What to watch: Ohio State was upstart team of the conference last season, going from 17-18 two seasons ago to 24-11 last year. This season, the Buckeyes have cemented themselves as Big Ten title contenders and possibly more. Ohio State became the first team in the conference to knock off Maryland since it joined the league.

Ohio State won the final two of three meetings between the two teams last season but has lost five straight to Iowa at Carver-Hawkeye Arena.