Iowa left too many points off the board to come away victorious against No. 1 Notre Dame. 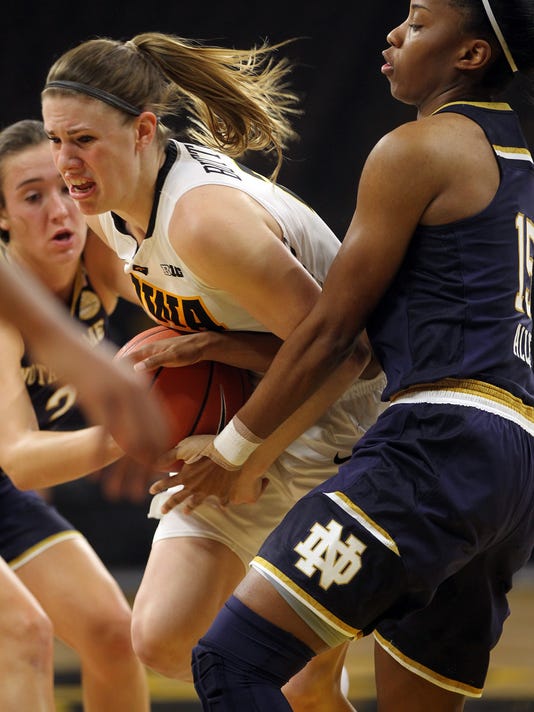 IOWA CITY, Ia. — Iowa out-rebounded Notre Dame 39-35 Wednesday night. That's the first time anyone had edged the Irish on the boards this year, and it'll likely be one of the few times for the rest of the season. The Hawkeyes also finished with 17 assists, compared to Notre Dame's 12.

There were lots of these box-score victories, but they didn't add up to an actual victory. Twenty-three turnovers reeled back the Hawkeyes' upset bid against No. 1 Notre Dame, and they lost 73-58 in the Big Ten/ACC Challenge. The Irish scored 21 points off those 23 turnovers.

Megan Gustafson notched another double-double with 16 points and 11 rebounds. Statistically, she outplayed Associated Press All-American Brianna Turner, who finished with 15 points and four rebounds. Ally Disterhoft led Iowa with 18 points and dished out five assists. Kathleen Doyle was next on the leader board with six points.

Iowa has mostly hung tough against a powerhouse before falling off in the fourth quarter in two of its past three games. It happened in a 78-65 loss to No. 9 UCLA in Cancun, and of course it happened Wednesday.

Here are some takeaways from the more recent version. 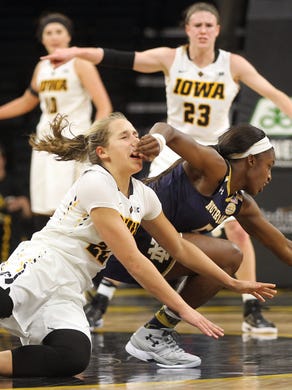 Iowa's Kathleen Doyle gets hit in the face as she fights for a loose ball during the Hawkeyes' game against Notre Dame at Carver-Hawkeye Arena on Wednesday, Nov. 30, 2016. David Scrivner/Iowa City Press-Citizen
Fullscreen

Iowa's Alexa Kastanek, top left, celebrates with Megan Gustafson as they head into a timeout during the Hawkeyes' game against Notre Dame at Carver-Hawkeye Arena on Wednesday, Nov. 30, 2016. David Scrivner/Iowa City Press-Citizen
Fullscreen

This game started out about as poorly as you could imagine for Iowa.

First possession: Kathleen Doyle drove into a blockade in the paint and turned it over, and the Irish scored — 2-0.

Second possession: Another turnover on a pass inside to Doyle, and the Irish scored — 4-0.

Play hadn't even lasted for two minutes at that point.

“I think we were just a little hurried on offense in the first half," Disterhoft said. "Coach talks about composure, I think that’s huge. You have to have that, especially when you’re playing the top team in the nation, one of the top teams in the nation."

Composure found the Hawkeyes for the next two quarters. That “1” next to Notre Dame didn’t matter; Iowa matched the Irish 34-34 through quarters two and three.

Some numbers from that span …

Now some uglier numbers, from quarters one and four …

“I wish I could take back the first five minutes and the last five minutes,” Hawkeyes coach Lisa Bluder said, “because I thought the middle was pretty good.

"It's been happening like this all year. It's like the first half, we're so juiced, I think we're so ready to go that we're almost not playing calm and collected, like you have to do."

Iowa's Kathleen Doyle gets hit in the face as she fights for a loose ball during the Hawkeyes' game against Notre Dame at Carver-Hawkeye Arena on Wednesday, Nov. 30, 2016. David Scrivner/Iowa City Press-Citizen
Fullscreen

Iowa's Alexa Kastanek, top left, celebrates with Megan Gustafson as they head into a timeout during the Hawkeyes' game against Notre Dame at Carver-Hawkeye Arena on Wednesday, Nov. 30, 2016. David Scrivner/Iowa City Press-Citizen
Fullscreen

Iowa obviously wanted to find ways to feed Gustafson as much as possible, but Notre Dame’s uncanny speed and length on the perimeter made that nearly impossible. It was an accomplishment just to find a brief window for an inside pass.

You’re not going to beat Notre Dame inside. One, Turner is the best big in the country and she’s got the edge over any matchup — even Gustafson. Two, it’s a tall task to touch the paint against the Irish.

So, the Hawkeyes needed to shoot long balls, and lots of them.

They hesitated early on. Doyle, Disterhoft, Tania Davis and Mackenzie Meyer all balked on 3s in the first, each making an extra pass or putting the ball on the floor instead of letting it fly. Iowa shot just three 3-pointers and made one.

They enjoyed a 3-for-7 mark from long range in the second, but they missed their final nine 3-pointers, including critical shots as Notre Dame expanded its lead at the end of the third and into the fourth.

“We have to start putting the ball in the hole better from 3-point range, because otherwise it clogs up everything in the middle,” Bluder said. “So we have to start doing it. We’ve got to find people that are going to do the job for us.”

To be fair, the same length and speed that makes it hard to penetrate against Notre Dame also makes it hard to get off a clean 3. There was a possession in the third in which the Hawkeyes rifled passes all around the perimeter and into the paint to Hannah Stewart twice before ultimately getting off a shot. And they were good passes, too — nothing was open.

Against a Notre Dame, or a Maryland or Ohio State for that matter, an upset bid will crash and burn if points get left off the board. Iowa shot shot 6-for-15 from the charity stripe.

“Forty percent from the free-throw line — you think of what a difference mentally if we had six, seven, eight more free throws,” Bluder said. “It makes it a totally different game at the end.”

The free-throw misses came at bad times for Iowa, too. A couple examples: Bre Cera missed one after Notre Dame pushed its 43-41 lead to 48-41 four minutes into the third. Chase Coley missed a pair later in the third with Iowa down 50-46.