Iowa's next three opponents before closing the season against last-place Wisconsin? Northwestern, Purdue and Indiana. 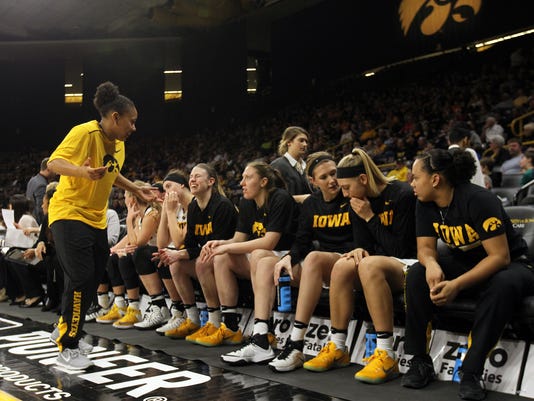 Her Hawkeyes sit at 6-6 in the Big Ten, tied for fifth place with Northwestern, Michigan State and Purdue, and one game back of 7-5 Indiana.

Their next three opponents before closing the season against last-place Wisconsin? Northwestern, Purdue and Indiana.

"We do completely control our own destiny right now with these last four games," Bluder said. " ... We could end up even as high as fourth in this conference, but we obviously have to win all four."

If Iowa takes both road games in Bloomington, Ind., and West Lafayette, Ind., and sweeps the home games, it’ll enter the Big Ten tournament securely in line for an at-large berth in the NCAA Tournament.

Lose one of those road games and Iowa will chomp at its nails on Selection Monday. Lose both road games — or two of the four games, in general — and it’ll need to win at least two games in the Big Ten tournament for a chance at an at-large.

"It’s huge. We have a lot of opportunities in front of us and we recognize that," said Ally Disterhoft, who topped 20 points in both games last week. "We recognize the importance of each of these last four Big Ten games, especially. The most important game is the game right in front of us, and that’s Northwestern."

The Wildcats enter Thursday’s contest having lost three straight, mustering only 38 in a 28-point loss last Saturday at Indiana. They were supposed to play Iowa with four days’ rest, but the death of Northwestern guard Jordan Hankins postponed its Jan. 11 game at Minnesota to Monday.

So this will be Northwestern’s third road game in five days, while Iowa will have three days of rest since its game at Ohio State.

Northwestern ranks around the middle of the conference in basically every meaningful stat but two: field-goal percentage defense and blocked shots. The Wildcats lead the Big Ten both categories.

That’s thanks in large part to Nia Coffey, a senior all-Big Ten post players who’s sixth in conference in blocks (1.6 per game), tied for sixth in points (19.6 per game) and second in rebounds (11 per game). She’s one of five Northwestern seniors that pace the team.

"When you think about how young we are," Bluder said, "and then you look at five seniors and the talent that they have, that’s I guess what has my attention right now."

On Monday, Makenzie Meyer was named the Big Ten freshman of the week for her performances against Michigan State and Ohio State.

Tania Davis was the first to find out, and she told Meyer on Monday while the team was lifting weights.

"I just get little comments when I’m walking around in the locker room, like ‘Hey Big Ten freshman of the week,’" a smiling Meyer said Wednesday. "It’s fun."

She averaged 15 points, 3.5 rebounds and three assists last week. She scored a career-high 14 points against the Spartans and set another career high with 16 points in Columbus.

Meyer is the first Hawkeye to land freshman of the week honors since Megan Gustafson did it in late February of last year.

"She’s pretty awesome," Gustafson said. "That’s huge. Getting that, for her is really awesome. She’s going to have a lot of confidence in knowing she’s going to lead us."

About Northwestern: "They have one of the most senior, experienced teams in the conference. They have five seniors that could potentially be in their starting lineup." - Iowa head coach Lisa Bluder