Iowa will play the 8-20 Badgers this Sunday in the regular-season finale.

Those seniors could play their final regular-season game together at Carver-Hawkeye Arena on Sunday against Wisconsin (the WNIT may change that).

"They’re all so different. That’s it," Iowa head coach Lisa Bluder said. "I think it’s hard to clump them into one category, other than you can clump them and say they’re all remarkable young women. They’ve all done really well academically. But they’ve definitely all three had different basketball paths."

We’ll dive into Disterhoft’s story a bit more in the coming days. For now, here's a number for you: 2,000.

"Obviously it’s a special feeling just to know that your name is up there with a select few other people," Disterhoft said. "I’ve had a ton of help along the way. I think, being a senior now, you realize that."

The senior is 57 points away from becoming the Hawkeyes' all-time scoring leader.

The Hawkeyes have at least two more games to play: Sunday vs. Wisconsin and the first round of the Big Ten Tournament, likely vs. Northwestern. If they win that, they’d play the top seed — Maryland or Ohio State.

Then, Iowa will play some form of postseason, whether it’s the NCAA Tournament or the WNIT. That’s at least one more game. Disterhoft averages 16.5 points per contest and needs 57 over two, three or even four games.

"I don’t think that it’s necessarily something I predicted right when I came in," Disterhoft said. "I think when I realized that it was possible, then it kind of came on my radar — like, ‘Hey I want to go do this. I want to go achieve this if I can.’ But I’ve never been one to force things out there. I kind of let the game come to me, try to get my teammates involved the best I can. So scoring a ton of points and getting shots up has not been my focus." 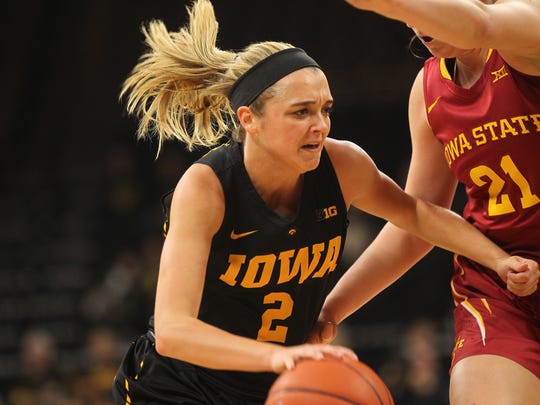 Makenzie Meyer forgot she had a volunteering event Friday morning. So at 7 a.m., Alexa Kastanek got a text. Minutes later, she was out the door to go pick up Meyer and drive her to the volunteering. Then, after the event, she picked Meyer up again and drove her to class.

"She definitely has the mother role of our team," Meyer said of Kastanek. "Especially as a freshman, she’s always there for me, whether it’s basketball, school, my social life. I can talk to her about anything."

That’s the niche the senior from Lincoln, Neb., has carved out for herself in Iowa City. Her playing time has fluctuated over her four years, but never her undeniable leadership qualities as a player, as a friend.

"It’s those little things that continue to build up, and then when (Meyer’s) a senior she’s going to do the same thing for a freshman. It’s just the repay of it all."

The senior guard has had a fluctuating role on the court, but her leadership has never changed.

Kastanek attended Lincoln Southeast High and became the first in school history to start every single game, freshman through senior year. She committed to Iowa as an ESPN's No. 100 recruit and played in 34 of 36 games as a freshman, averaging 12.7 minutes per contest.

Her minutes have been halved to 10.3 this year with the addition of Meyer, Kathleen Doyle and Bre Cera, and she’s scoring three points contest.

But, according to her teammates and Bluder, that hasn’t affected Kastanek’s attitude or leadership qualities.

"She has tried to find ways to contribute to our team no matter what her role is on the court and I admire that," Bluder said. "I admire that a lot, because that’s a hard role to be in.

"It’s a great example for somebody like Amanda Ollinger, who’s been in a very similar situation. Amanda, as a freshman, watching a senior and how (she’s) handling the situation, it’s a great lesson."

Kastanek admitted it was hard at first to adjust to fewer minutes after dominating the headlines in high school. But now she’s become the type of senior leader who helped her transition to a new role as an underclassman.

"There are times where you’re kind of questioning, ‘Wow am I good enough?’" she said. "And that’s when the upperclassmen and seniors step in and say, ‘Yes you are good enough, you’re here for a reason.’ That’s what helped me with my perseverance."

Spirit of the team

Her minutes are sparse. Her impact on the team is not.

"She has provided so much joy in our locker room," Bluder said. "She has provided laughter, and that is a big role. When you’re in a long season, the difficult ups and downs of the season, to have someone that always brings joy to the team that always brings a light spirit and will do anything that you ask her to for the good of the team, that’s an incredible example."

Iowa's bench undeniably cheers the loudest when Schneden makes a basket late in the fourth quarter.

"(Hailey) is the funniest person on the team, in my opinion," Meyer said. "She’s so fun to just hang out with and be around. And she obviously has such a hard-working attitude to come to practice every day even though she doesn’t always get a chance on the court."

About Wisconsin: The Badgers have won two games in a row against Rutgers and Illinois. Guard Cayla McMorris (12.4) and forward Avyanna Young (10.8) pace the team in scoring. It's been a rough year for Wisconsin, but it did beat Green Bay, 54-53, back in December.