The Big Ten's perception problem was just one topic of conversation after an eventful Selection Monday. 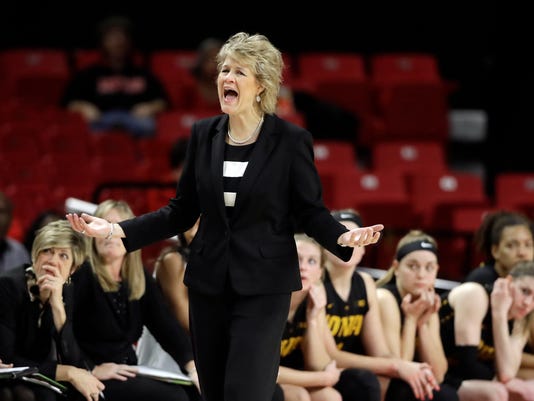 Iowa head coach Lisa Bluder reacts after a call against her team in the second half of an NCAA college basketball game against Maryland, Sunday, Jan. 29, 2017, in College Park, Md.(Photo: Patrick Semansky/AP)

IOWA CITY, Ia. — There was lots to talk about in the media room of Carver-Hawkeye Arena Tuesday afternoon, after an eventful Selection Monday.

Iowa didn’t make the NCAA Tournament — that was expected. It’s hard to sell yourself with an RPI of 64, a 17-13 overall and 8-8 conference record, and no huge wins. So the Hawkeyes will host Missouri State Thursday at 7 p.m. in the first round of the WNIT.

What wasn’t expected from Monday night? Northern Iowa got a Big Dance ticket. Michigan did not. Nor did 10 of the 14 teams in the Big Ten.

Iowa head coach Lisa Bluder and her players reacted to a Monday night that had its share of surprises to a Midwest audience.

'A shame for the Big Ten Conference'

This was an off year for the Big Ten. Rutgers, Wisconsin and Illinois all had RPIs below 200, and Nebraska wasn’t too far behind, at 196.

ESPN bracketologist Charlie Creme said the conference's weakness would hurt Iowa's NCAA Tournament chances. But nobody suffered more from it than Michigan.

The Wolverines tied a program record with 22 wins and went 11-5 in conference play to earn third place in the Big Ten. They spent several weeks ranked in both top 25s, and they were always at least a fringe-top 25 team. They beat Gonzaga, ranked 25th at the time, in November. They beat Indiana. They beat Purdue. They won six straight conference games in late January and early February.

… And they were one of the "first four out." A WNIT team along with ninth-place Iowa, seventh-place Penn State and fourth-place Indiana. Maryland, Ohio State, Michigan State and Purdue will represent the Big Ten as the smallest contingent among the Power 5 conferences.

“Until we decide to (schedule tougher), it’s going to continue to happen like this. ... I think we did our job, but everybody else — the other 13 — need to do their jobs.”

"I know that was a little surprising for me," Ally Disterhoft said. "I can’t really comment much on that besides the fact that four Big Ten teams (making the NCAA Tournament) is all it was. It is what it is."

"I think that’s a shame for the Big Ten Conference," Bluder added.

But is it justified?

The Big Ten boasted just the sixth-best conference RPI this season and the fifth-strongest schedule — both worst of the Power 5 conferences. As a result, Maryland, a top-five team all year and the Big Ten champion, got stamped with a 3 seed.

"Schedule better," Bluder said simply when asked what the Big Ten can do to change its perception problem. "We talk about it every year at our Big Ten coaches meetings — that we need to do this. And nobody follows suit, so this is exactly what happens."

Entering Monday, Iowa had the 30th-toughest schedule in the country and second-toughest in the Big Ten. Its nonconference strength of schedule — which featured UCLA, Notre Dame and South Dakota State — was the fourth-best in the country.

Those numbers get uglier as you rose in the Big Ten standings. Maryland’s strength of schedule? No. 87. Michigan? No. 85. Northwestern’s was marked 78th. Indiana’s was 74th. Purdue’s was 65th. And Ohio State’s was 64th.

"Until we decide to (schedule tougher), it’s going to continue to happen like this," Bluder said. "We have to schedule better in our nonconference (play) than what we do in the Big Ten. I’m proud of our nonconference (schedule) — we had the fourth-best in the nation.

A tough pill to swallow

Creme had Northern Iowa in his "next four out" ahead of Monday's night's event — even more of a long shot than the Hawkeyes.

That made sense. The Panthers were the second-best team in the Missouri Valley — usually a one-bid league. And this wasn’t even a particularly strong year for the MVC — it had the 17th-best RPI of the country’s 32 conferences.

UNI’s berth was a success for all mid-major lovers. But it could definitely be suspect to Hawkeye fans, who watched their team destroy the Panthers 88-39 back in December.

It’s a tough pill to swallow when a team you beat by 49 makes it and you don’t.

"It’s good for them," Disterhoft said. "Obviously a bit of a wild card for everybody, but you have to be a good sport about it. They peaked at the right time, so kudos to them for making the tournament. I have good friends on that team. (I) sent Mikaela Morgan a text last night, congratulating her."