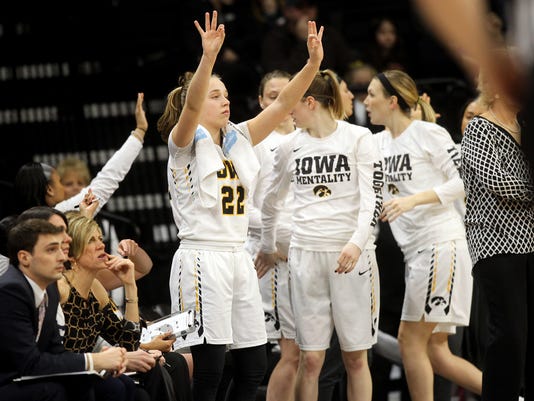 Iowa failed in that regard last season.

It was a Power 5 conference team still reeling from a perceived NCAA Tournament snub. At least, that's what it looked like in the WNIT first round against Ball State. The third-place team from an average Mid-American Conference handily outplayed Iowa and handed it a first-round exit.

But these Hawkeyes have hugged this year's WNIT tight. They shot 62.3 percent against Missouri State — a WNIT record — and they dropped 78 on a South Dakota team allowing just north of 63 points per game. They look like a care-free team simply enjoying basketball, and that's fun to watch.

And now they’re the last team standing in Iowa. Iowa State, Drake and Northern Iowa were all one-and-dones in the Big Dance.

"I love being in this tournament," Megan Gustafson said. "I think we treat it as our own NCAA Tournament, and so we’re going to go play our hardest, play together and play as long as we can."

The fans have embraced the WNIT, too.

Entering Sunday, there’d been 35 WNIT games played, and Iowa boasted the largest and fifth-largest home crowds of all 35. It was also the only school with an attendance that topped 3,000 (3,226 against Missouri State).

"Obviously, home court is really important during this tournament," Iowa head coach Lisa Bluder said. "It's the one national tournament you get to play on your home court, so you might as well take advantage of it and use it, and I think that we're doing a good job of using our fans, and I think our fans are just tremendous at supporting our basketball team."

Iowa will get home court again when it hosts Colorado this Thursday at 7 p.m. in the WNIT third round. Colorado beat South Dakota State 81-75 in the second round.

Iowa's Ally Disterhoft goes up for a shot during the Hawkeyes' WNIT second round game against South Dakota at Carver-Hawkeye Arena on Saturday, March 18, 2017. David Scrivner/Iowa City Press-Citizen
Fullscreen

Iowa's Makenzie Meyer goes up for a shot during the Hawkeyes' WNIT second round game against South Dakota at Carver-Hawkeye Arena on Saturday, March 18, 2017. David Scrivner/Iowa City Press-Citizen
Fullscreen 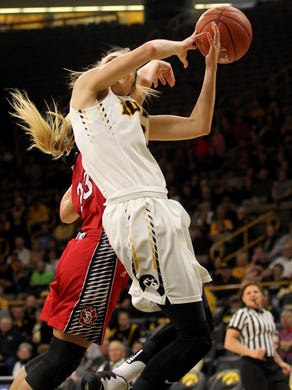 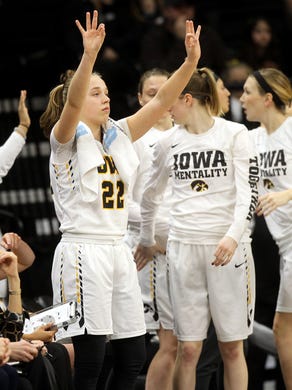 Efficiency, thy name is ...

Hannah Stewart has played 24 minutes in Iowa’s two WNIT games. In that time, she’s scored 21 points on 9-for-12 shooting.

The word "efficient" comes to mind …

Playing behind Gustafson, Stewart doesn’t get the most minutes of Iowa’s bench. But, man, she maximizes every second. If we stretch out her scoring numbers to a 40-minute average, Stewart’s netting 35 a game in the WNIT. Gustafson would be at 34.8.

"I think confidence is a big thing with experience and being on the court and just learning more of the 5 (the center position) at Iowa and going up against Big Ten posts," Stewart said. "With time, it’s really just built my confidence up."

Bluder played Stewart as a power forward last year, and it didn't work; she took six shots in the entire season. So Bluder moved the 6-foot-2 sophomore to center, practicing against and playing behind Gustafson.

Iowa's Hannah Stewart is thriving at center, no longer 'fish out of water'

"She just felt she was undersized to play the 5. She's not," Bluder said. "She can play the 5, and I think this year she's just embraced it — understood that that's the best place for her on the floor.

"I love to see her confidence growing. I absolutely love that. You know — and I talked to her a couple weeks ago about this — this is a tough situation: You're playing behind one of the best posts, really, I think, in the Midwest. You're playing behind her, so it does limit your minutes, but the minutes that you're in are so vitally important to us."

She tallied seven assists Saturday to push her season total to 137, the most by a freshman in Iowa’s history. The previous record-holder was Samantha Logic.

And here’s what’s really impressive: Doyle didn't even play point guard for most of this season. When Tania Davis was healthy, Doyle was primarily a shooting guard who played some point when Davis rested.

"When you think of Sam Logic and who she was — a first-round WNBA pick — and she's taking that record away," Bluder said, "that shows you what the potential is for Kathleen Doyle."

Doyle was asked after the USD win how many of her 137 assists have come down low with Gustafson and Stewart.

"They’re pretty good at finishing," she said with a smile, "so it makes my job easy."

Doyle also holds the Iowa freshman record for steals in a single season, with 66 and counting.