Takeaways: What to make of WNIT run, shutting down another top guard

Takeaways: What to make of WNIT run, shutting down another top guard 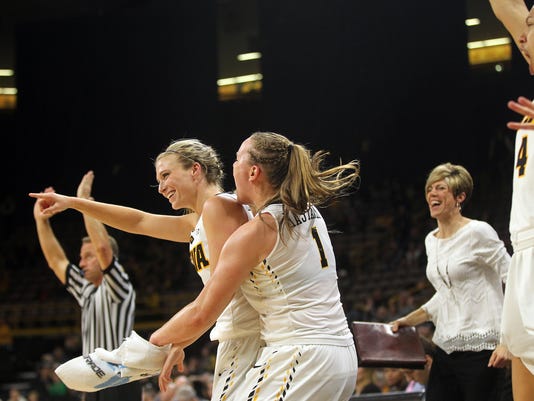 Iowa's Alexa Kastanek jumps off the bench to celebrate with Makenzie Meyer after a 3-pointer during the Hawkeyes' WNIT third round game against Colorado at Carver-Hawkeyes Arena on Thursday, March 23, 2017.(Photo: David Scrivner/Iowa City Press-Citizen)Buy Photo

You’d be hard-pressed to find a better three-game stretch this year. Maybe those three against Iowa State, Northern Iowa and Robert Morris, which included the 88-39 shellacking of the Panthers.

But those didn’t come in a win-or-go-home setting.

"We are playing really good basketball. I think we're really developing our inside and outside game," Ally Disterhoft said. "We're getting better at reading the shots that we should be taking, setting people up who are hot.

"But you want to be clicking at this time in the postseason, and so it feels good to kind of be on a little bit of a run, and hopefully we can keep that going forward."

There are three ways to look at the Hawkeyes’ WNIT dominance.

One, Iowa’s truly peaking at the right time.

Two, Iowa has played non-NCAA Tournament teams from the Missouri Valley Conference and the Summit League, as well as a 5-13 Pac-12 team.

Three, Iowa’s proving the Big Ten wasn’t so bleh, and that it might have deserved more than four NCAA Tournament bids. (Michigan and Indiana are also in the WNIT quarterfinals on the other side of the bracket.)

Or maybe it’s a mix. 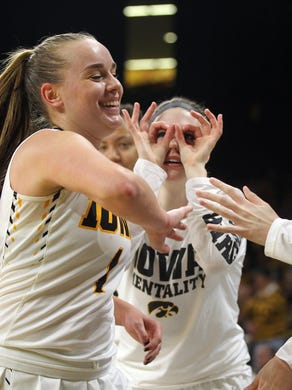 Iowa's Alexa Kastanek gets high-five's as she heads to the bench during the Hawkeyes' WNIT third round game against Colorado at Carver-Hawkeyes Arena on Thursday, March 23, 2017. David Scrivner/Iowa City Press-Citizen
Fullscreen 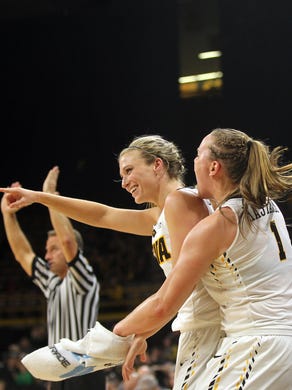 Iowa's Alexa Kastanek jumps off the bench to celebrate with Makenzie Meyer after a 3-pointer during the Hawkeyes' WNIT third round game against Colorado at Carver-Hawkeyes Arena on Thursday, March 23, 2017. David Scrivner/Iowa City Press-Citizen
Fullscreen

Iowa's Alexa Kastanek celebrates one of her 3-pointers during the Hawkeyes' WNIT third round game against Colorado at Carver-Hawkeyes Arena on Thursday, March 23, 2017. David Scrivner/Iowa City Press-Citizen
Fullscreen

Colorado's Haley Smith fights her way to the hoop during the Buffaloes' WNIT third round game against Iowa at Carver-Hawkeyes Arena on Thursday, March 23, 2017. David Scrivner/Iowa City Press-Citizen
Fullscreen

When you play 33 games in a season, you’re probably going to break some records. Especially with the individual talent on Iowa’s roster.

First was the biggest: Ally Disterhoft topping the program’s all-time scoring mark in Round 1 against Missouri State. She’s now at 2,086 career points, 27 ahead of second-place Cindy Haugejorde.

In the same game, Megan Gustafson grabbed 10 rebounds to jump to 307 and break the single-season rebound record previously held by Amy Herrig (1998-99). She’s now up to 328 boards.

Kathleen Doyle broke Sam Logic’s freshman record for assists in Round 2 vs. South Dakota, dishing out seven to get to 137 this season.

And last night against Colorado, Gustafson technically didn’t break any record, but she did become the fourth Hawkeye (and the first since 1990) to eclipse 600 points in a single season.

"I just have to credit my teammates again," said the 6-foot-3 sophomore who doesn't seek out praise. "They always do a great job of setting me up. Game after game, my coaches and my teammates believe in me, in practice every day. So my goal every day in practice and every game is just to work as hard as I can for them."

Premier guards haven’t always looked so good against the Hawkeyes. Particularly in, and after, conference play.

Thursday night, she got six points on 2-for-14 shooting to go along with five assists, four fouls and six turnovers.

"She's a sophomore point guard, which sounds old compared to ours, but she's still a sophomore, right?" Bluder said "She's still a little bit more inexperienced, so we wanted to mix up our defenses and try to really make her think out there, not get into a rhythm, really identify where she was in the zone."

The WNIT was supposed to be huge for the growth of Iowa's freshmen. Defensive efforts like those from Iowa's first-year guards — Kathleen Doyle, Bre Cera and Makenzie Meyer — against a player like Leonard are proving exactly why.