The first of three spring notebooks reviewing the details and updates from the Iowa women's basketball offseason.

IOWA CITY, Ia. — Iowa’s spring women's basketball practices wrapped in late April. Players now get May off before June workouts, when incoming freshman Jinaya Houston of Davenport North will join the team for the first time.

Spring had a different flavor this year than Iowa has experienced in a while. No Ally Disterhoft, who closed her storied career atop the school’s all-time scoring list. And no assistant coach Lacey Goldwire, who’s now at Arkansas.

But assistant coach Jan Jensen said spring also felt exactly as it does every year — in a good way.

"We’ve always felt the spring kind of mimics the seasons of the year. There’s just a new outlook," Jensen told HawkCentral. "Just like the trees bud, and the flowers. Last year is done, and now you’re looking around and you don’t have the upperclassmen or the seniors, and so then there’s a new feeling of freshness. Everybody’s figuring it out, and there’s a new year kind of buzz."

The Hawkeyes’ spring ran from April 10-26. NCAA rules allow coaches to work with players for two hours a week, so Iowa did two organized one-hour practices.

Jensen said they began light, with some ultimate Frisbee, before focusing mostly on positional breakdowns and some one-on-one work inside Carver Hawkeye-Arena.

Beyond spring practices, Jensen discussed a wide range of topics with HawkCentral. This is the first of three spring notebooks reviewing the details and updates from that conversation. 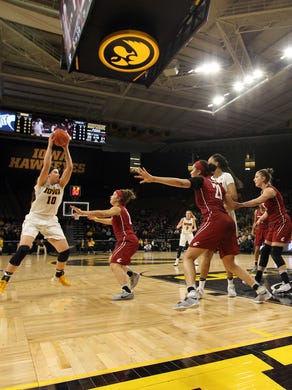 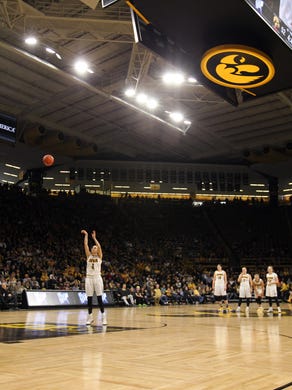 Iowa's Kathleen Doyle dives out of bounds to save the ball during the Hawkeyes' WNIT Elite Eight game against Washington State at Carver-Hawkeyes Arena on Sunday, March 26, 2017. David Scrivner/Iowa City Press-Citizen
Fullscreen

Iowa's Kathleen Doyle looks for a call after getting thrown to the ground during the Hawkeyes' WNIT Elite Eight game against Washington State at Carver-Hawkeyes Arena on Sunday, March 26, 2017. David Scrivner/Iowa City Press-Citizen
Fullscreen

The Hawkeyes still have two scholarships remaining for 2017, with Houston as the only incoming freshman. Jensen said there’s no rush to use those.

"We redshirted Alexis Sevillian, so she’ll be in that class as a basketball player with Jinaya Houston," Jensen said. "So that was a little bit by design, in the sense that we didn’t want that to be a real big class. And if there was a graduate transfer, that’d be a possibility. Like a (junior college prospect) or a late bloomer, we’re still very possibly — and I mean that very possibly — (looking).

"I’m not counting on having to have it."

As of now, next year’s roster would be …

Jensen said if Iowa were to add anybody, that player would be a big.

"We just believe that less is more," she said. "We don’t feel like you just have to take it and fill out a roster just to have the bodies. When we recruited in the fall, we had a small number. And we didn’t have a big need.

"We still have a little time to be able to do (add someone). And like I said, we’re kind of investigating. But nothing is urgent, and it would only be if it does make sense."

Jensen said they aren’t currently looking at anybody local for those final two scholarships.

Goldwire, who spent four years on head coach Lisa Bluder’s staff, accepted an assistant position at Arkansas in April. She grew up in Oklahoma City, which is about 3 ½ hours from Arkansas’ campus in Fayetteville.

"When you get young, really sharp coaching minds, other people notice, too," Jensen said. "So we kind of feel like that’s our job, too — to help prepare people that want to go on and get promotions and so forth.

"(Goldwire) grew up near there, so she’s not going to miss the snow, I can tell you that. But she’s a great person. We’ll certainly miss her in so many ways."

Goldwire worked primarily with Iowa’s wings and was the team’s recruiting coordinator.

Jensen said she thought the posting for assistant job would close in early May, although she wasn’t sure. She didn’t offer any specifics on candidates, but she said they’re happy about who’s applied so far.

"We’re still kind of getting that information (on who’s applied). And then, of course, there’s some folks that we’ve known being in the business," Jensen said. "But we’re really pleased and excited, and I think even though it’s always sad to see someone go, the positive is that it’s always nice — you get new ideas, you get a new way of looking at things. You get a new perspective."

Matthew Bain covers preps, recruiting and the Hawkeyes for the Iowa City Press-Citizen, Des Moines Register and HawkCentral.com. Contact him at mbain@gannett.com and follow him on Twitter @MatthewBain_.