The home team has won each of the last 10 matchups in the Cy-Hawk series. Iowa, meanwhile, hasn't won in Hilton Coliseum since 1989.

Iowa women's basketball coach Lisa Bluder on what the Cy-Hawk rivalry means to the programs.

IOWA CITY, Ia. — It’s a peculiar twist among the familiarity, a narrative that will remain prevalent until one team goes against the grain and wins on the road.

Iowa will take another crack this year as Cy-Hawk rolls around once again, a series that’s seen the home team emerge victorious in each of the last 10 meetings. The Hawkeyes’ Hilton Coliseum losing streak extends even further — Iowa State has won 10 in a row in Ames and hasn’t lost to its in-state rival at home since the 1989-90 season.

“At Iowa State, it’s a place where we haven’t had very much success in a long, long time, and obviously, our team wants to change that around,” Hawkeyes coach Lisa Bluder said. “I think our team feels good about where they’re playing right now, but we also realize that Iowa State is going to have a terrific crowd there — that they are going to be playing their best basketball against us.

“… They’ve only had two home games this year — they are 2-0 on their home court—  but again, I like where our team is sitting right now. I think we’re in a good spot, and I think it’s a good time to go in there.”

Although records and momentum are often irrelevant in rivalry showdowns, Iowa (8-1) and Iowa State (3-4) enter Wednesday’s matchup from different ends of the basketball spectrum.

Herky the Hawk entertains the crowd as Iowa players are introduced prior to the Hawkeyes' game against Iowa State at Carver-Hawkeye Arena on Wednesday, Dec. 7, 2016. David Scrivner/Iowa City Press-Citizen
Fullscreen

Iowa's Tania Davis celebrates a basket in the final seconds of the first half of the Hawkeyes' game against Iowa State at Carver-Hawkeye Arena on Wednesday, Dec. 7, 2016. David Scrivner/Iowa City Press-Citizen
Fullscreen

Iowa State's Bridget Carleton goes up for a shot during the Cyclones' game against Iowa at Carver-Hawkeye Arena on Wednesday, Dec. 7, 2016. David Scrivner/Iowa City Press-Citizen
Fullscreen

Iowa's Kathleen Doyle high-five's teammates as she heads to the bench during the Hawkeyes' game against Iowa State at Carver-Hawkeye Arena on Wednesday, Dec. 7, 2016. David Scrivner/Iowa City Press-Citizen
Fullscreen

Iowa's Bre Cera goes up for a shot during the Hawkeyes' game against Iowa State at Carver-Hawkeye Arena on Wednesday, Dec. 7, 2016. David Scrivner/Iowa City Press-Citizen
Fullscreen

Iowa State's Seanna Johnson pulls up for a shot during the Cyclones' game against Iowa at Carver-Hawkeye Arena on Wednesday, Dec. 7, 2016. David Scrivner/Iowa City Press-Citizen
Fullscreen 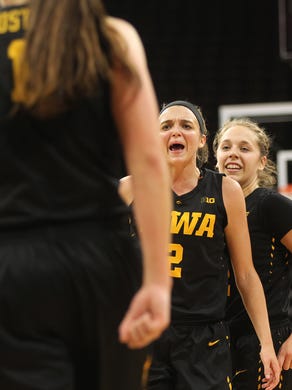 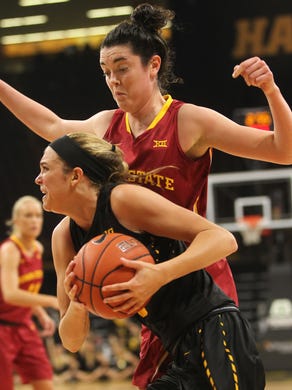 The Hawkeyes have already racked up three wins over 2017 NCAA Tournament teams, nearly toppled a top-15 Florida State squad and currently leads the nation in assists per game. Iowa erased the Seminole pain with Sunday’s 80-59 bounce-back win over Samford, the Hawkeyes’ seventh double-digit victory this season.

Iowa State, meanwhile, has hit some early-season turbulence. The Cyclones enter on a three-game losing streak and have dropped four of their last six, including in-state road losses to Northern Iowa and Drake. A 77-74 defeat at Vanderbilt is the latest evidence, a game in which Iowa State led at halftime but couldn’t close out down the stretch.

“Since we’ve been playing every year, this is the first time where one team is considerably better than the other team going into the game,” Cyclones coach Bill Fennelly said. “We are a decided underdog no matter how you look at it, and that’s part of it. That’s part of college sports, part of what this game can be about.

“So we’re going to have to play at a very, very high level certainly and hope that they maybe don’t play quite the way they’ve been playing to go out and have a chance to win.”

Although there aren’t many in-state natives on either team — only Iowa’s Makenzie Meyer (Mason City) and Amanda Ollinger (Linn-Mar), as well as Iowa State’s Meredith Burkhall (Roosevelt) — the rivalry isn’t resonating any less. Most vital contributors on both sides have a moment, a scene, a game when they realized what Cy-Hawk truly means.

“When we played at Iowa State my freshman year, that’s when it kind of hit me that this is a big game,” said Iowa junior Megan Gustafson, a Wisconsin native. “The coaches always love playing this game This is huge. It kind of feels like we’re all from the state of Iowa this week.”

Added Iowa State junior Bridget Carleton, an Ontario native: “I knew what it was about my senior year of high school, just being able to watch the women’s basketball game when I was in high school and already committed here. I knew how much it meant to the state of Iowa and to Iowa State, to the fans and to the coaches.

“I’m not even from the country, but I know how much it means. I’m just as passionate about it as anyone else, so I’m just excited to get to play in this game again.”

There’s no need to guess who’s perched atop each team’s scouting report — it’s Gustafson and Carleton, two dynamic pieces who can take over offensively on any given night.

Gustafson is averaging a double-double (22.3 points, 12.7 rebounds) while shooting a staggering 69.6 percent from the field, which ranks second nationally entering Tuesday’s slate. Carleton, meanwhile, is averaging 20 a game and most recently dropped 30 on the Commodores in Saturday’s loss.

Slowing, not stopping, the two standouts will be considered a win. Both Bluder and Fennelly said defending Carleton and Gustafson will require a multitude of contributors, that one player won’t be tasked with such a daunting assignment.

Which leaves one question.

Will Iowa finally shake free from its infamous streak, or will Hilton Magic snatch up another victim once again?