Iowa hasn't won a Big Ten Tournament title since 2001. It'll have a shot against Maryland on Sunday after a 72-67 win against Rutgers.

INDIANAPOLIS — The Iowa Hawkeyes are 40 great minutes away from drought-busting history.

With a tense 72-67 win Saturday night against Rutgers, they survived to reach the championship game of the Big Ten Conference women’s basketball tournament for the first time since 2014.

It’ll be top-seeded Maryland against second-seeded Iowa at 5 p.m. Sunday for the crown. Maryland, the league's marquee program since joining in 2015, is 13-1 with three titles in its Big Ten Tournament history.

"We want that title so bad," Iowa forward Hannah Stewart said. "I don’t want to see the Maryland name at the end of the bracket anymore, I’m sick of it. I think the rest of us are, too. No offense to Maryland.”

A reminder: Iowa hasn’t won a Big Ten Tournament title since 2001, Lisa Bluder’s first year as coach. She’s now in Year 19. And no Iowa team in any women's sport has won a Big Ten title — regular season or tournament — since field hockey in 2008.

Saturday’s performance at Bankers Life Fieldhouse certainly showed a Hawkeye team that seemed hungry and capable — even when Megan Gustafson isn't her otherworldly self.

"I am human sometimes. It's tough to admit that," the nation's leading scorer joked after being held to her lowest point total since Jan. 10. "My teammates did a wonderful job of uplifting me and telling me the next shots are going to go in. They weren’t worried at all.”

Iowa raced to a 37-23 lead at halftime, then survived late.

Gustafson, a 70-percent shooter and national player-of-the-year candidate, missed six of her first seven field-goal attempts and scored only two points in the first 15 minutes. Yet Iowa was still comfortably ahead, 25-16. Stewart (who finished with 14 points and seven rebounds) and Makenzie Meyer (13 points, four assists) were the early catalysts. 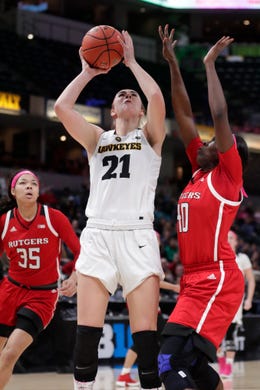 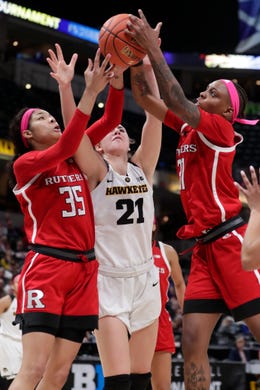 Rutgers forward Stasha Carey (35) and forward Tekia Mack (31) go up with Iowa forward Hannah Stewart (21) for a rebound in the first half of an NCAA college basketball semifinal game at the Big Ten Conference tournament in Indianapolis, Saturday, March 9, 2019. Michael Conroy/AP
Fullscreen 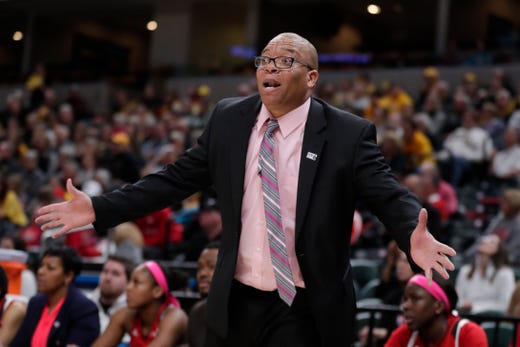 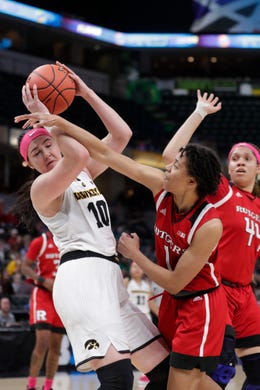 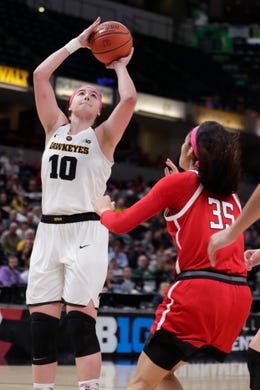 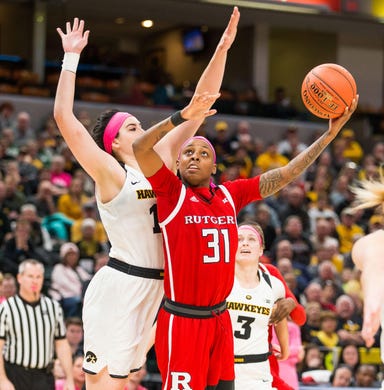 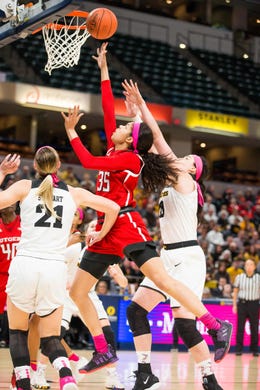 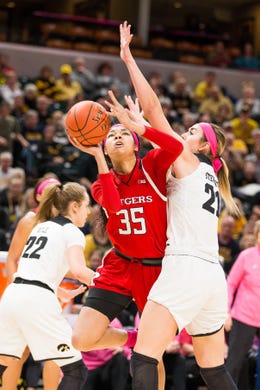 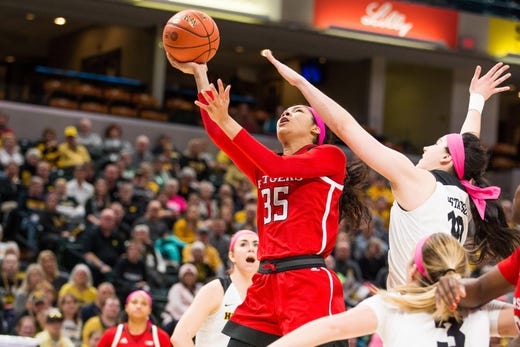 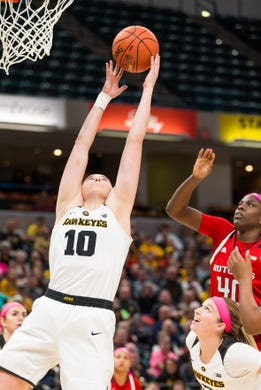 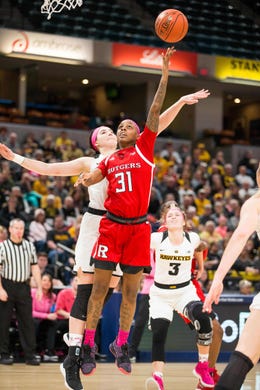 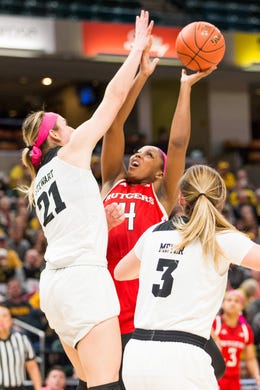 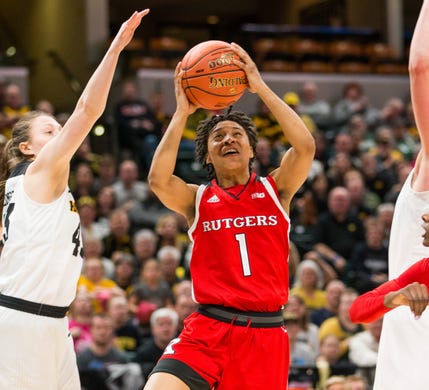 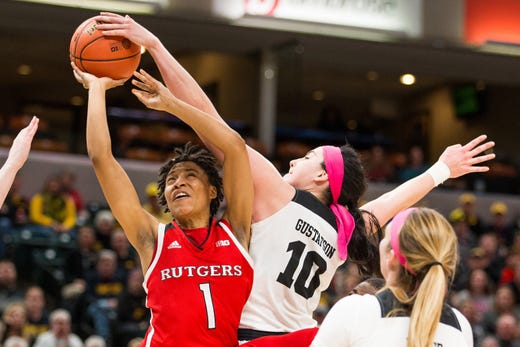 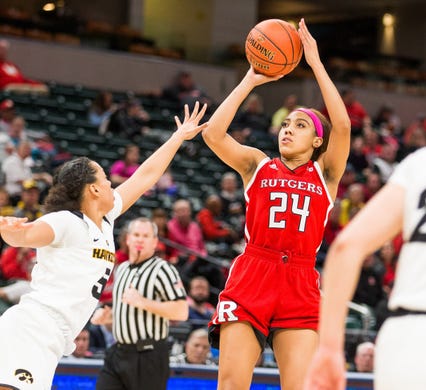 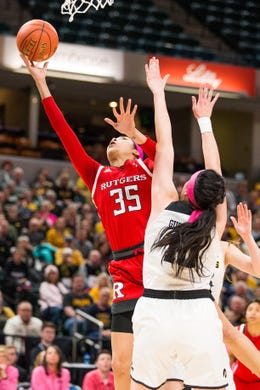 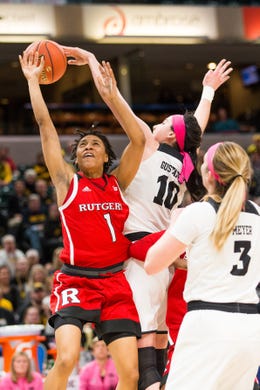 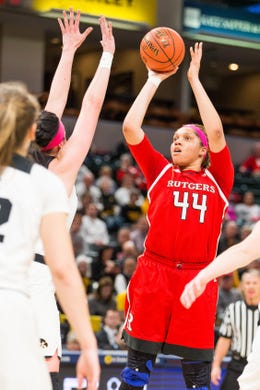 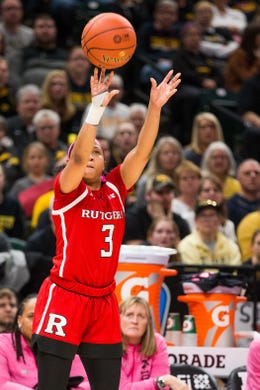 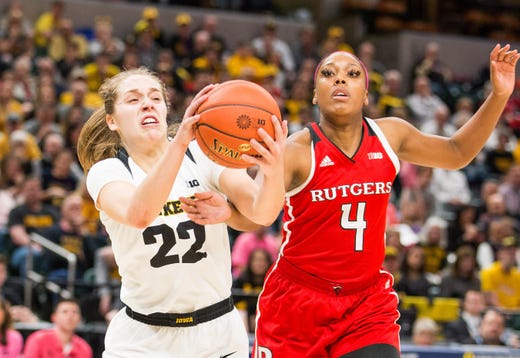 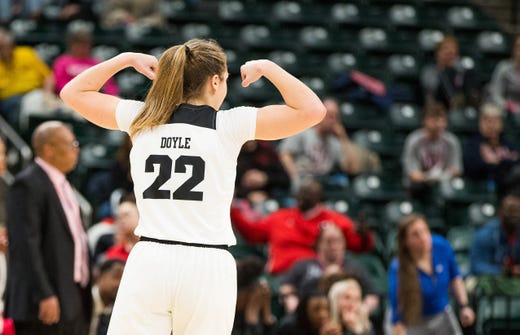 Then, as usual, Gustafson got going. The Big Ten player of the year posted her 84th career double-double — 20 points on 9-for-18 shooting with 12 rebounds.

“We knew that the odds are in our favor when we’re up 10 and Megan goes 1-for-7," Stewart said. "Obviously, she’s going to come back and have a million points.”

Worth mentioning: Gustafson had an ice pack on her right (non-shooting) wrist after the game.

“It’s just a little tweak. Nothing serious," she said. "We’ve had a couple games in a row. It’s a grind right now.”

Saturday certainly was the grind.

Iowa (25-6) let a 53-33 lead get whittled to three points on three occasions in the fourth quarter. But Tania Davis' clutch corner 3-pointer with 1:36 to go extended the lead to 68-62, and the Hawkeyes held on from there.

A senior coming up big in crunch time. It was Davis' calm 3 that pushed Iowa in front late against Indiana in Friday's quarterfinal win, too.

"We tell her she has ice in her veins," Meyer said. "She’s probably the most clutch player I’ve ever seen.”

A rematch with eighth-ranked Maryland is next. The Terrapins bring a 28-3 record into Sunday’s title game, one of those losses coming in Iowa City.

Iowa used a 27-4 advantage in free throws and pulled away late to beat Maryland, 86-73, on Feb. 17. No doubt both teams have retribution on their minds — the Terps for that rare loss, the Hawkeyes for finishing one game short of the regular-season title.

“We need to play better tomorrow than we did today,” Maryland coach Brenda Frese said after her team survived fourth-seeded Michigan, 73-72. “But it won’t be hard to motivate our team to be ready to play.”

Possibly at stake for both teams: A No. 2 seed in the NCAA Tournament that begins March 22. Iowa was projected as the last 2 seed by the NCAA earlier this week, with Maryland a 3. It’s highly possible Sunday’s winner takes a 2, the loser takes a 3 when the brackets come out March 18.

But more importantly, there's a Big Ten title on the line.

With Maryland, a national power, in the league now … these opportunities won't come along often. For the three Hawkeye seniors — Davis, Gustafson and Stewart — this is their last chance to raise a Big Ten banner.

“It’s something that I’ve dreamed about for four years, to be honest. I’ve visualized this in my head, this day that’s coming tomorrow," Gustafson said. "Our team is ready. We’ve been ready for this since the beginning of the Big Ten season.

"And, you know, it gives us a lot of confidence that we beat Maryland a few weeks ago … knowing that we have all that it takes to win tomorrow.”