How Iowa's 2018 signees performed in their senior seasons

Joe Wieskamp and CJ Fredrick dominated competition during their senior seasons. Here are the details.

How Iowa's 2018 signees performed in their senior seasons

How his season went:Wieskamp led Muscatine to a 16-9 record and its first state tournament berth since 2002. Although his Muskies came up short against Iowa City West in the quarterfinals, Wieskamp put on a show his whole senior year and captivated crowds across the state. Double teams, triple teams, quadruple teams; it didn't matter — Wieskamp simply dominated competition this season. He finished a remarkable four years with 2,376 points — the most in 4A history and the sixth-most among all classes — and he capped his high school career with a 29-point, 11-rebound double-double at Wells Fargo Arena. 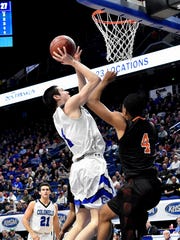 CJ Fredrick drives the lane and drops in two pints for Covington Catholic in their win over Fern Creek, at the KHSAA Basktball Tournament "Elite Eight", Lexington, KY, March 16, 2018. (Photo: Geoff Blankenship for The Enquirer)

How his season went: Fredrick led Covington Catholic to a 34-4 record and its second state title in school history. Winning a title in any state is a big deal. But in Kentucky, there's only one state champion for all the schools, so Fredrick had to lead his team to 10 postseason wins in order to claim the crown. He scored 32 points on 9-for-15 shooting in the state championship win over Scott County. Gatorade named Fredrick its Kentucky player of the year.

- Patience pays off for Fredrick, who reminds one analyst of Jordan Bohannon