'Big opportunity for me': In-depth with Valpo grad transfer Bakari Evelyn, who is set to visit Iowa

While waiting for his flight home from his New Mexico State official visit, Bakari Evelyn discussed his recruitment and upcoming Iowa visit with the Register.

'Big opportunity for me': In-depth with Valpo grad transfer Bakari Evelyn, who is set to visit Iowa

Iowa men's basketball is officially in the market for a graduate transfer.

Valparaiso guard Bakari Evelyn will take an official visit to Iowa from June 7-9, he confirmed to the Register on Wednesday. Iowa assistant coach Sherman Dillard offered him a scholarship during a phone call a couple weeks ago, before the dead period started May 16.

"I'm excited to get to Iowa, and I'm just humbled," Evelyn said over the phone. "Very grateful and thankful for the opportunity." 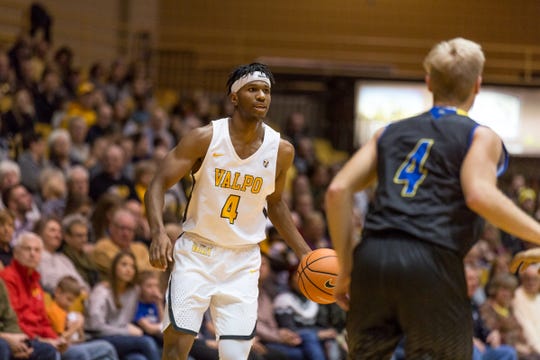 Bakari Evelyn is a redshirt junior guard for the Crusaders. (Photo: Courtesy of Valparaiso Athletics)

Evelyn just wrapped up an official visit to New Mexico State and was actually talking to the Register from the airport in New Mexico. He has also officially visited Portland State and is considering a Rhode Island visit, and he's heard from schools such as Wisconsin, Minnesota, Cincinnati and Cal.

While waiting for his flight home, Evelyn discussed his recruitment and upcoming Iowa visit with the Register. Here are the highlights from that conversation:

When Dillard called Evelyn a couple weeks ago, it was like old friends catching up. Dillard recruited Evelyn out of high school, and the Iowa coach has a good relationship with Evelyn's mother.

"I know him pretty well. Iowa has recruited me two times previously," Evelyn said. "Dillard recruited me heavily while I was in high school in Michigan, in Detroit. He came up there a lot to see me. And then when I was coming out of high school deciding which college to go to, they wanted me to go to Iowa and redshirt — that’s when they had a really good team."

"They said we’ve wanted you previously two times, so we already know the type of player you are," Evelyn said. "So the evaluation process got sped up a lot, I think." 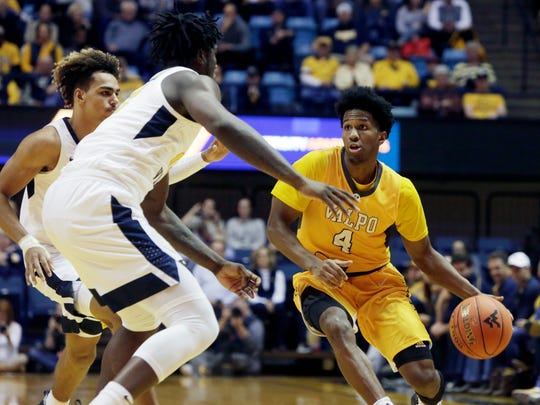 Valparaiso guard Bakari Evelyn (4) drives to the basket while being defended by West Virginia forward Andrew Gordon (12) during the first half of an NCAA college basketball game Saturday, Nov. 24, 2018, in Morgantown, W.Va. (AP Photo/Raymond Thompson) (Photo: The Associated Press)

According to Evelyn, McCaffery said he didn't think a grad transfer made sense when he still had Isaiah Moss and Jordan Bohannon slated to play next year.

"And then seeing Moss leave and then Bohannon having to have surgery and things like that, he felt like now there’s a big opportunity for me to play and be able to contribute to the team," Evelyn said. "Fran has always been kind of straightforward with me."

Where would Evelyn play?

"I know he would play me at the 1 a lot, but he also knows and says I’m kind of bigger in size and I can play off the ball, on the ball," Evelyn said. "So I’m pretty solidly sure I’d play the 1 and the 2, but I don’t know how the lineups would work or anything."

What about Iowa appeals to Evelyn?

"I’ve known Sherm for a while," he said. "I know Coach McCaffery a little bit, and just kind of how he runs his team. And of course the success that they’ve had the last few years, and how they’re really good developing players. Just the fact that he knows my game, he showed good interest and talked about good things about my game, how he could really have an opportunity for me to really excel, and also contribute to their team in a big way — try to help them get back to the (NCAA) tournament and make a run."

What does he want to learn during his Iowa visit?

Evelyn's Iowa visit was originally scheduled for this weekend, but coaches switched it to June 7-9 so Evelyn could be on campus when current players were there.

"I’m kind of just trying to see how I would fit and how I would enjoy being there at Iowa," Evelyn said. "I’m coming off a visit to New Mexico State and I really liked this visit, I really liked their staff and the situation here. But I also am definitely open and would want to see what Iowa has to offer and just how that mix would work with me being there, the town, the people, the team, kind of just the whole experience."

Evelyn said he could "possibly" visit Rhode Island, in part depending on how his Iowa visit goes. He holds offers from Iowa, Rhode Island, NMSU and Portland State.