Recruiting pictures start to crystalize in July, as prospects and college coaches start to hone in on their top choices.

NORTH AUGUSTA, S.C. — Recruiting pictures start to crystallize in July, as prospects and college coaches hone in on their top choices.

That's certainly the case for Iowa basketball, as the picture of who the Hawkeye coaches are prioritizing is becoming more and more clear.

Here's what we've learned about Iowa basketball recruiting so far in July. 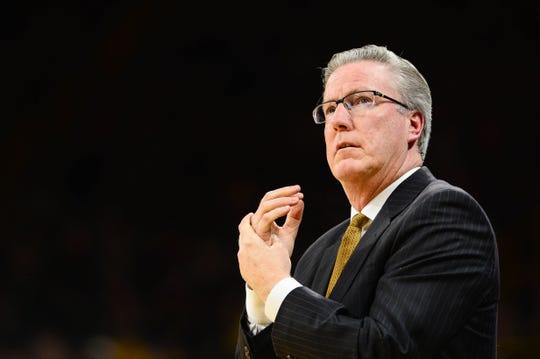 Fran McCaffery was out on the recruiting trail this past weekend, looking for pieces to his 2020 recruiting class. (Photo: Jeffrey Becker, USA TODAY Sports)

Ahron Ulis, come on down

Looking for a target Iowa has an great chance to get? Meet three-star Chicago point guard Ahron Ulis. The 6-foot-2 Marian Catholic product enjoyed an excellent Peach Jam and picked up an Iowa offer on Wednesday — his first from a high-major.

Immediately after landing the offer, Ulis told me he "definitely" wants to officially visit Iowa, and now it's just about figuring out when to come.

Hawkeye coaches had tracked Ulis for a while before Peach Jam, and Fran McCaffery and Sherman Dillard watched him in North Augusta. Before receiving his offer, Ulis told me McCaffery had been in contact with his father and coach since the live period ended.

Other than Iowa being Ulis' only high-major suitor, there's history here that may give the Hawkeyes a leg up. Ahron is the younger brother of Tyler Ulis, the former star Kentucky point guard whom Iowa nearly landed in the 2014 class. So Iowa coaches already have a relationship with Ulis and his family.

I watched him play a couple games with Meanstreets at Peach Jam. He's not the flashiest athlete, but he's productive, smart and can make things happen for teammates.

"I love Ulis," another coach said. "Underrated athlete and knows how to play. He can play in the Big 10."

One of the main reasons Iowa is in tight with four-star New York wing Andre Jackson is McCaffery. Jackson lives about 10 minutes from Siena, where McCaffery coached the program to three straight NCAA Tournament berths from 2007-10.

Iowa's head coach is basically a celebrity in Albany, Jackson said. And it's his bond with McCaffery that could set the Hawkeyes apart when he ultimately makes his decision.

Iowa SF target Andre Jackson was on his A-game at the 2019 Peach Invitational Tournament. Hawk Central

But Iowa may have to worry about beating more than just UCLA, Syracuse and UConn, who are also prioritizing Jackson. While he is focused on those four schools, Jackson also left the door open for new programs to enter the fray in July.

"I might re-visit a few schools, and then take a couple visits to schools that gain interest here," Jackson said.

If he wants to officially visit Iowa again, it would have to be after October 19-21, when he took his official to Iowa City this year.

Jackson also told me Andrew Francis, who recruited him hard at Iowa, is now recruiting him at Cal. Francis was courtside for both of Jackson's games that I saw Saturday.

"He was really involved. He’s even involved with me now at Cal," Jackson said of Francis. "He was one of the first coaches that recruited me, so it’s definitely a blessing to be able to have him talk to me and stuff like that. I really appreciate him, as well."

It appears Iowa is pretty much out of the running for five-star St. Louis point guard Caleb Love. The Hawkeyes had an in-home visit with Love in April and watched him several times during the fall and winter.

But in my conversation with him Saturday, he mentioned nine schools that were high on his radar, and none were Iowa. They were: North Carolina, Kansas, Louisville, Indiana, Texas, Georgetown, Missouri, Illinois and Arizona.

Kiyron Powell is a name to watch

The 6-10 center from Evansville, Indiana, is very interested in the Hawkeyes and eager to get on campus for an official visit. He told me he already has an official scheduled to Houston for Aug. 2-4, and after that he hopes to visit Iowa, Xavier and Cincinnati.

Iowa is in an excellent spot here because it's Powell's first and only Big Ten offer so far.

"Man, this is amazing," he said. "I never really expected myself to be in this position."

I only got to watch him play for a bit with Indy Heat, but I saw a defensive-minded rim-protector with a yawning wingspan who runs the floor well and has a nice offensive arsenal under and around the basket. 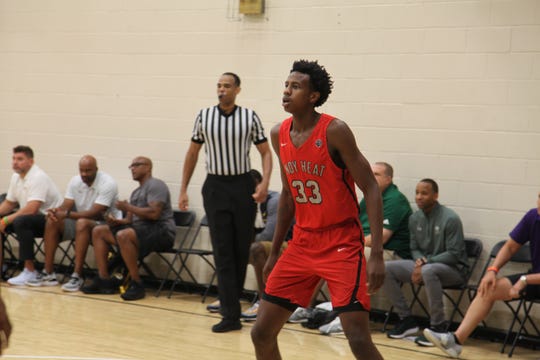 Since landing his Iowa offer on July 2,  Powell has tacked on offers from Cincinnati, Murray State and Western Kentucky. He said Louisville, New Mexico and Purdue are among other schools showing interest.

If Purdue offers, it could be tough to beat. The Boilermakers have been in the picture for a long time.

In case you missed it: Oskaloosa's Xavier Foster told me he plans to release his finalist schools soon, and it'll likely be a list of three.

It would be surprising if the Hawkeyes weren't among Foster's finalists. They have done great work with the four-star 7-footer and have built strong relationships with the family.

Who did Iowa watch?

These are some of the teams and prospects that Iowa coaches watched during the July 11-14 live period: