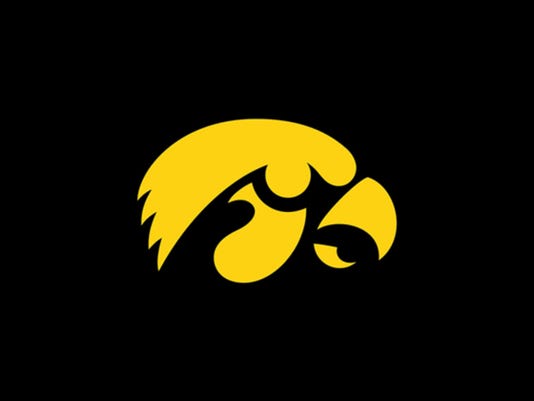 Juan Harris might be the state's biggest recruiting prize in the 2017 class, but the North Fayette Valley sophomore intends to be smaller in stature by the time he enrolls at Iowa.

And that could make him an even bigger problem for opposing offenses.

The Hawkeyes offered Harris a scholarship Monday and the 6-foot-3, 365-pound sophomore accepted. He picked Iowa over offers from Wisconsin, Tennessee, Virginia and Utah.

"I know a lot of players in my class and the class above me will pick a school depending on their ranking and things like that," Harris said. "I'm worried about the connection I have with the coaches, because down the road I'm going to graduate from the University of Iowa and these are the people I'm going to know for the rest of my life. I want to make sure these people are legit and they care about me."

The process of getting to know each other unfolded over a three-month span after Harris arrived at North Fayette Valley and worked to gain his varsity eligibility.

As a freshman, he took two bus trips and an hour-long train ride each morning from his Chicago home to attend Niles Notre Dame High School. He moved with his mother to Janesville, Wis., midway through the school year and reunited this summer with his father in West Union.

Harris was originally ruled ineligible for the first 90 days of the school year, but he was allowed to play in the Class 2-A semifinals and state championship game after his father was granted partial custody.

"My mom decided to let me go with my dad because she felt like that was the better place for me to stay," Harris said. "Everything has turned out well, and I'm hoping it continues to turn out well for the next couple years."

Harris is ranked the top sophomore prospect in the state by 247Sports, the 10th-best defensive tackle nationally and the No. 94 overall player in the 2017 class.

"He has rare strength," North Fayette Valley coach Bob Lape said. "The speed, quickness and agility he has is really unbelievable for a guy his size."

Harris said he intends to weigh between 310 and 325 pounds by the time he joins the Hawkeyes. He said his nutrition and workout habits have changed since he arrived at North Fayette Valley.

"Everybody's pitching in to help me out," he said. "It's not only going to take their support but it's going to take the dedication and desire I have for the game to lose this weight, too, because I know I can be a better player at 310 pounds or 320 pounds because I'll be able to move faster, I'll be light on my feet and I'll have more energy."