Iowa's 20 commitments are under-recruited nationally. Is that a good thing? We'll see, someday. 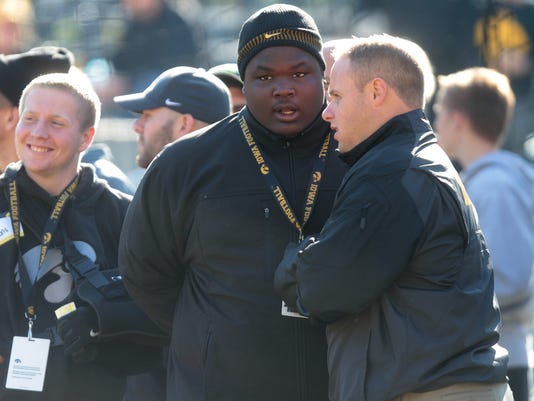 Whether it's a successful methodology, file that into the "TBD — 2017 or later" folder. But in a high-upside pass rusher and a defensive back that even had recruiting die-hards wondering, "who?", the Hawkeyes are boldly executing a more-aggressive plan.

Iowa has racked up 16 commitments in 22 days, bringing its Class of 2016 total to 20 — tied for the most of any Big Ten Conference school, according to Rivals.com. Indiana has a Big Ten-low eight commitments.

Nobody is twisting Seth Wallace's arm to be at 20 (of a projected 25) before Independence Day.

"You're not looking at a calendar. ... It kind of happened," the new Iowa recruiting coordinator, hired 12 months ago and given a recruiting staff, said Friday. "Now, it happened with a lot of hard work. It is a collective effort."

In his first true class, Wallace could sit back and wait for more senior-year highlights to be sure about some of these prospects. But he isn't. More than 200 scholarship offers have been passed out. Why?

To answer that, take Lance Billings as an example.

Billings was one of three commitments Iowa received Monday that went public between noon and 1:30 p.m. He didn't even have a recruiting profile or star rating until after the Lorain, Ohio, native tweeted he has accepted Iowa's scholarship offer.

So, fill-in-the-blank time: There's no tangible reason for Iowa to verbally lock up Billings seven-plus months out from National Signing Day, unless ____.

... Unless Iowa thinks it has uncovered a gem.

Just last week in an interview, national recruiting analyst Tom Lemming called Iowa one of the best talent evaluators in the Big Ten. If that's truly the case, why not trust your gut now and go with it before other power-conference programs catch on?

Iowa picked two cornerback prospects Monday, the other being Cedric Boswell (5-11, 172) of Beverly Hills, Mich. Neither had another known power-conference offer, but they are pure athletes. Boswell reportedly runs 4.44 in the 40-yard dash.

Monday's first commitment, defensive end Romeo McKnight of Crystal Lake, Ill., also comes without a power-conference offer. Yet, he is one of the highest-rated recruits in this burgeoning Class of 2016 with a 6-foot-5, 230-pound frame.

The lack of other major offers could very well signal alarm bells — that these aren't guys that Ohio State or Michigan or even Illinois are battling for. If nobody else wants them, why should Iowa? And why now? Both are valid questions.

From the point of view of those with offices in the sprawling, state-of-the-art Football Operations Center on Evashevski Drive the answer is this: The Hawkeyes are identifying targets they like, and they're acquiring them before anyone else can.

The best poker players trust their read. That's exactly what the Hawkeyes are doing. How good are the cards in their hand? Be patient. Someday, we'll find out.