Sports reporter Chris Cuellar looks ahead at who could be the top prospects coming out of Iowa in 2018.

Wednesday’s National Signing Day festivities were for celebrating the countless hours of work Iowa’s coaching staff and scouting personnel put into the Class of 2017.

Now that the signatures are in, the recruiting calendar flips its focus to 2018.

A quick glance at what the Hawkeyes have on their scholarship chart can give you an idea of what’s coming. But coach Kirk Ferentz’s staff has already extended plenty of offers to the current class of high school juniors and will be watching closely until the next National Signing Day on Feb. 7, 2018.

Here’s a way-too-early rundown of the recruiting Iowa needs to do before then.

Who’s next at linebacker?

Last year’s starters bought Iowa a little time here, because they’re all back for their senior seasons. Josey Jewell, Bo Bower and Ben Niemann have played well beyond their recruiting rankings.

Unfortunately, there isn’t much experience or depth behind them. Jack Hockaday and Aaron Mends will be juniors in the 2017 season, but they combined for 15 tackles in 2016. Sophomores Angelo Garbutt and Amani Jones will be expected to chip in, along with perhaps Kristian Welch and the three redshirt freshmen, but getting just one potential linebacker out of 2017 in Nate Wieland means it’s a priority in 2018.

“I wouldn’t be surprised if Nate Wieland ends up being a linebacker,” Ferentz said Wednesday. “That’s what I envision him being, but if he’s not we got a good safety, too.”

Iowa already knows it’s a position of need: Wisconsin linebacker Mike Bruner was the first 2018 commit in October. According to Rivals, the Hawkeyes have already offered five other linebackers in the class, including Illinois standout Jack Sanborn and coveted Indiana four-star Cameron McGrone.

McGrone is a nationally rated outside linebacker prospect who visited Iowa City on the weekend of the Michigan upset, but he is reportedly drawing interest from Notre Dame and Ohio State as well.

Wednesday’s haul came with two four-star prospects, but Mark Kallenberger and Tristan Wirfs are projected outside as tackles. Iowa’s three most versatile starters up front will all be seniors in Ike Boettger, Boone Myers and Sean Welsh.

That means Iowa has to find and develop its new wave of guards and centers, and maybe even huge athletes who can flip over to defensive tackle.

Like Bruner in the linebacker corps, Iowa knows it has work to do here and has already picked up a commitment for the future in Illinois native Jeff Jenkins. But there will be a lot of bodies to replace and interior linemen usually need ample time to develop under strength coach Chris Doyle.

Ferentz mentioned Bryan Bulaga and James Daniels as freshmen he could plug in up front, but added, “those guys don’t come along real often.”

Offensive linemen are sure to pop up as the process goes along, but Rivals currently lists Iowa offers out to some of 2018’s top prospects at defensive tackle, including five in the national top 20. 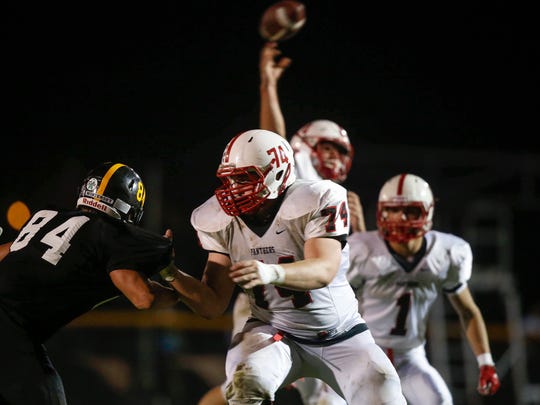 If you’re shrugging this off because you think the Cyclones can’t possibly compete with Iowa in recruiting ... you shouldn’t.

Iowa and ISU emerged with the same number of in-state signees on Wednesday, and even though the Class of 2018 doesn’t look as deep as 2017, the two schools are battling early on the best prospects.

Hawkeye and Cyclone coaches were in as soon as possible on this trio, and while they all hold offers from both schools, ISU holds a geographic and timing advantage. Waggoner, Clark and Downing had camped in Ames and been offered by coach Matt Campbell’s staff before Iowa extended their offers.

Getting in-state prospects is not the end-all, be-all of recruiting — see: Martin, Oliver — but the Hawkeyes have held their ground for a long time with their Big 12 in-state rivals. It would be strange to see that change with the class of 2018.