We'll have updates on Iowa Hawkeyes signing day throughout the day. 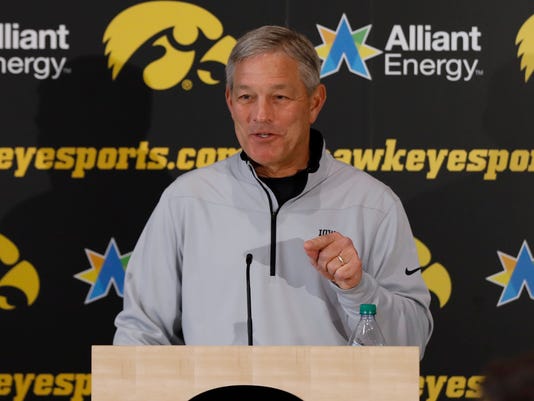 IOWA CITY, Ia. — Well, it's finally here folks: The first early signing period is upon us. College football prospects have the option to sign their letters of intent today, Thursday or Friday.

We'll have updates on Iowa Hawkeyes signing day throughout the day.

Get to know all of the Hawkeyes' expected signings in our complete list, which includes bios, rankings and some information about every player.

2:30 p.m.: Grayshirt defensive back Riley Moss of Ankeny Centennial sent in his letter of intent. Moss won't be join the team until the spring semester.

10:20 a.m.: Whoa. Christmas has come early for Iowa. Four-star safety Dallas Craddieth at St. Louis committed to and signed with the Hawkeyes today, picking them over Illinois, Indiana and Wisconsin. He had previously said he wanted to extend his recruitment to the Feb. 7 signing day, and he had an official visit scheduled for Indiana on Jan. 19. The talented safety finished his senior season with 66 tackles, five interceptions, one forced fumble, one sack and three tackles for loss. His film reminds you of a certain Hawkeye cornerback who led the country in interceptions this year. Craddieth likely projects at safety for Iowa.

That Hazelwood Central connection working for #Swarm18! Welcome Dallas Craddieth to the #Hawkeyespic.twitter.com/Z8ydRiZnJ4

9:50 a.m.: The Prairie Ridge boys are officially Hawkeyes. Offensive lineman Jeff Jenkins and athlete Samson Evans, both leaders of Prairie Ridge's back-to-back Illinois state titles, sent in their letters of intent. Jenkins picked Iowa over offers from Purdue and Northern Illinois, among others. He’s been a solid Hawkeye pledge since January last year. Evans, the Illinois Gatorade Player of the Year, played quarterback in high school but projects as a jack of all trades for Iowa — running back, slot receiver, punt returner. He could have played quarterback at Northern Illinois, but he chose the Hawkeyes for their reputation of molding undersized high school quarterbacks into other positions where they'd have a better chance of going pro.

9:45 a.m.: Spencer Petras' letter of intent is in. This is a biggie for the Hawkeyes. They entered the four-star prospect's recruitment late and flipped him from Oregon State just last week. Quarterbacks coach Ken O'Keefe is the all star here. Petras is a 6-foot-5, 225-pound offensive coordinator's dream for a pro-style offense — and he looks a lot like Nate Stanley on tape. He racked up 4,157 passing yards and 50 passing touchdowns this season — both school records. He will graduate in December and early-enroll at Iowa.

From the Bay to the City, welcome Spencer Petras to the #Hawkeyes | #Swarm18pic.twitter.com/c03N80K0oX

9:40 a.m.: Tracy is Iowa's first of three expected signees from Indianapolis, along with four-star defensive backs Julius Brents (Warren Central) and D.J. Johnson (North Central). They form quite an impressive haul from Indianapolis for the Hawkeyes. A lot of credit goes to assistant defensive line coach and recruiting coordinator Kelvin Bell, who logged plenty of miles securing commitments from these three.

9:30 a.m.: The Hawkeyes received a letter of intent from Tyrone Tracy, a three-star wide receiver/running back from Decatur Central in Indianapolis. Tracy also held offers from Louisville, Illinois and Northwestern, among others. He's a prolific, 6-foot, 185-pound athlete who piled up 1,412 rushing yards, 1,132 receiving yards and 29 total touchdowns this season. The Indiana Gatorade Player of the Year projects as a receiver at Iowa.

Bringing the Indiana Gatorade Player of the Year to the #Hawkeyes! Welcome Tyrone Tracy Jr. | #Swarm18pic.twitter.com/IFJcmXgHrt

9:25 a.m.: If everything goes as expected today, Iowa will sign 15 prospects. According to the 247Sports Composite, Iowa's class would rank 41st in the country, but 10th in the Big Ten (just goes to show you how strong the Big Ten recruiting hauls are this year).

9:10 a.m.: The Hawkeyes' in-state class is all set. It's not as big as Iowa's previous in-state hauls — just three in Waggoner, Linderbaum and Doyle. But those three pack a punch. Waggoner is the state's top prospect and he projects as a productive defensive end with a year or two in the system. Linderbaum, a U.S. Army All-American Bowl selection, is a rare athletic breed for defensive tackle. And Doyle plays like the son of strength coach Chris Doyle: hard-nosed, tough football. He's a perfect fit for Iowa's linebacker corps.