A small-scale Iowa football recruiting pipeline in Alabama? Experts think it can happen.

Derrick Foster wants to recruit his home state of Alabama, which could be the most talented football state outside the "Big Four." Can Iowa create a small-scale pipeline?

A small-scale Iowa football recruiting pipeline in Alabama? Experts think it can happen. 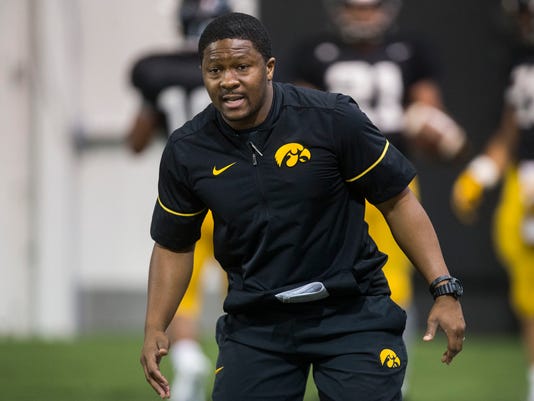 According to Rivals, Michigan players hold the most offers at 20. Then there’s Missouri and Texas at 14, Illinois at 13, Ohio and Indiana at 12, and Iowa at 10. No shockers in the top seven.

But at No. 8, there’s a new state in play for the Hawkeyes.

And with running backs coach Derrick Foster on staff, this state will be in play for the foreseeable future …

Iowa has seven offers out to Alabama prospects — more than it has out in Florida, Georgia, Nebraska, Minnesota, Kansas and Wisconsin.

For comparison, the Hawkeyes had offered only five Alabama kids over the past 17 years.

A native of Goshen, Alabama, Foster became Iowa’s 10th assistant in early February. He’d spent the previous two seasons as running game coordinator at Samford, an FCS program in Birmingham, and he’d spent the first five years of his coaching career in Georgia, Tennessee and Louisiana.

But Foster's strongest ties are in his home state.

He came to Iowa City at the start of the Feb. 9-April 14 quiet period, so he hasn’t traveled home to recruit yet. Still, he quickly offered five Alabama players within his first two weeks on staff.

"The biggest thing about it is (Alabama prospects) truly believe that we can get a couple players down there that’d be interested in coming up and playing in a Power Five, Big Ten school like Iowa," Foster said in a conversation with the Register after his spring practice press conference. "(Hopefully we could) go down there and pick a couple — steal a couple good football players."

Because Iowa, which doesn't traditionally recruit the deep South, now has an inroad with one of the region's most talent-rich states.

The question is: Can the Hawkeyes create a small-scale pipeline? Iowa has a recruiting footprint in Connecticut thanks to quarterbacks coach Ken O'Keefe, who grew up there. But there's obviously less competition in Connecticut than Alabama.

So, even with Foster's connections, can Iowa establish a legitimate recruiting footprint in a powerhouse state it's barely touched in the past 20 years?

We asked some experts to find out.

Is there room for Iowa in the Alabama recruiting scene?

Yes — especially in the 2019 and 2020 classes, said John Garcia Jr., 247Sports’ football recruiting analyst for the South. Of the schools that don’t consistently recruit Alabama, Garcia said Iowa, Virginia and Duke have tried to work their way into the state the most this spring.

"If there’s a year for an Iowa to come make a splash, it’s this 2019 cycle," he said. "It’s as deep as we’ve ever seen. That’s how you get (a pipeline) started: If you get one, who knows what it could turn into after that point."

"There’s more three-star guys that are being identified as Power Five guys (in Alabama)," he said. "That allows a school like Iowa — with some type of connection — to get in there and maybe pull one or two guys per cycle. That would be a win, in my opinion."

Of Iowa's seven offers in Alabama, six are three-stars. Here's a quick look at all seven:

Steve Mask is Finley and Ward's head coach at St. John’s Episcopal, Alabama’s reigning Class 5A state champion. He has a longstanding relationship with Foster and was one of the first calls to congratulate him when he got the Iowa job.

Mask thinks Iowa could do "very well" in his state.

"So the Big Ten presence and the northern presence is already here."

Does Iowa have groundwork in place to establish a pipeline?

Yes, Mask said. And Foster is a huge part of that. Iowa's running backs coach has a good reputation in his home state.

"He’s very well-respected from our end," Mask said. "The thing I’m impressed with about Derrick is that he comes in and doesn't put on any airs. He’s just his same self. He does it the way it’s supposed to be done."

Like Foster, Iowa also has a solid reputation in Alabama. That's not to say it will ever top the SEC.

"Obviously, it’s behind the SEC," Simmons said. "That’s the king in the South."

"Kids in Alabama recognize that," he said. "And I think for a school like Iowa, even compared to maybe Duke and Virginia, there’s a certain affinity for kids for that classic football — the classic Big Ten style we think of. There’s a certain 'Bama group of kids who really like that. To them, that’s football more so than what we see with the spread stuff."

Added Mask: "There’s no doubt about it with what coach (Kirk) Ferentz has done at Iowa over the years, and the fact that they’re always competitive on the national level. I think there’s a lot of respect for what goes on in the Big Ten."

Foster said he’s been struck by how excited Alabama prospects and coaches have been about Iowa coming down to recruit the state.

What kind of returns could Iowa realistically expect from Alabama?

Iowa isn’t going to beat the Alabamas and Auburns and Georgias for the state’s five-star kids. And it’s not going to try — those hours would be wasted resources, and Foster knows the Hawkeyes' home base is the Midwest.

But Iowa will target some three-star prospects.

Maybe a four-star guy here and there.

Players the top SEC powers might have overlooked ... or just didn't have room for.

A mid-tier kid who could do some damage up in the Big Ten.

The types of recruits South Alabama, Troy and UAB are thrilled to land.

"Skill guys, of course," Foster said. "If you can get some skill guys from down there — different styles of running backs, different styles of receivers. If you could go steal a diamond-in-the-rough receiver, maybe an under-the-radar type of guy. Maybe not quite as major SEC recruit."

Added Garcia: "There’s certainly second- and third-tier guys that blow up later on. A lot of people point to a certain group of guys as the type of kids you can come in late on in Alabama — DeMarcus Ware is the poster child. You can get NFL guys from that group."

Garcia and Mask said, in order to start a pipeline, Iowa would want to focus on Mobile, Montgomery and Birmingham. Five of Iowa’s seven targets are from those areas; Foster's last coaching job, Samford, was in Birmingham; and his hometown of Goshen is just an hour south of Montgomery.

But Garcia went further, saying Iowa, which won’t have as many resources to spend in Alabama, would want to focus on pipelining specific juggernaut schools.

"Go to schools that you know will be powerhouses," he said. "And if you look at the Iowa offer list, almost all the schools that they’ve jumped in on with kids are perennial powers in the state."

Garcia said St. Paul’s Episcopal would be a perfect place to start. Iowa already has offers out to two of its players — Finley and Ward. And Foster has a solid relationship with Mask, whose program routinely churns out Division I talent.

Mask said about 70 D-I college coaches come in during the spring to watch prospects each year. His program has recently produced quarterback A.J. McCarron and linebacker Mark Barron, both currently in the NFL.

That's not a bad coach to have in your corner.

"With the way Derrick handles himself when it comes to recruiting — he’s a first-class guy," Mask said. "He does everything just like you want to be done from a college standpoint to a high school coach.

"I think he can come in and get two or three players a year out of Alabama."